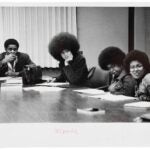 Willkommen, bienvenue, welcome to the S.S. Harvard. And to cabaret.

Students in the Theater, Dance & Media course “Production Studio: Queer Cabaret” studied the nontraditional, anything-goes form in a classroom setting this semester and got a crash course in producing, culminating in a dramatic and satirical show grounded in a place they know well.

This week “Truth Hurts: A Transformational Cabaret,” designed and performed by students in the course, plays at Agassiz Theatre. The production takes its audience on a voyage aboard the cruise ship S.S. Harvard, sending up and commenting on everything from the cultural significance of the John Harvard Statue to the pressures of College life, against the backdrop of a cocktail party on the high seas.

Carmelita Tropicana, a visiting lecturer in the department and an artist, author, and cabaret veteran of the downtown New York theater scene, taught the course and directed the show.

“The form of cabaret is really open and deals with the audience, so there’s a real connection there. Instead of a play where you have a fourth wall and you don’t break it, this is an invitation to the audience,” said Tropicana. “It can accommodate dance, film, stand-up — it can have it all. It can also be political, and my work has always been political, but it should be fun. It should be subversive.”

Course topics included the role of camp in acts past and present, the processes for developing characters, and the interplay between cabaret and political activism. Students attended a master class with the founders and directors of queer contemporary dance group MadBoots Dance, traveled to Maine to see a performance by cabaret artist Taylor Mac, and received a class visit from performance artist Joey Arias, whose archive was recently acquired by the Harvard Theatre Collection at Houghton Library.

“My idea of queer is very open, something that doesn’t fit into the normative. I think you can be queer in a lot of different ways. I’ve been asked, ‘Are you queer? Are you a lesbian?’ and I say yes, and sometimes I identify one way or another. Like, I am Latinx but I am also Cuban,” said Tropicana. “A lot of exciting cabaret happens to be queer, like Justin Vivian Bond and Taylor Mac. I think [the queer title] gave a kind of edginess to a Harvard course that students could be drawn to, or maybe not drawn to. I was interested in teaching the ‘queer’ part of ‘Queer Cabaret’ because I do queer work, and I love working intersectionally and intergenerationally, and in interdisciplinary ways.”

The performances are not the only part of cabaret that subverts norms; artists use elaborate costumes to showcase their characters’ personalities and add dimension to their stage presence.

Acclaimed costume designer Machine Dazzle joined the course as an artist-in-residence in November. Dazzle set up shop in a studio in the ArtLab Annex and worked with students to develop their costumes for “Truth Hurts,” which also helped them refine their understanding of their characters.

“I usually create big sculptural costumes that are barely wearable, but this is different, because there are six students and the set is small. I just responded immediately to what was the room,” said Dazzle, who has collaborated with Taylor Mac and recently performed a solo work, “Treasure,” at the Guggenheim Museum. “These students have something to say, and I want to make something that was appropriate and playful. I love humor, and it’s always good to include humor in your costumes, because laughter is healing when you’re talking about serious things onstage.”

Abraham Ebenezer Rebollo ’20, a concentrator in Theater, Dance & Media with a focus on costume design, first joined the course as a writer and costumer.

“My senior thesis is on camp, and I told myself I was going to focus on that this semester and couldn’t take this class because of the time commitment, but then I learned that Machine Dazzle was going to be working on this show, and Machine is a camp icon, so I decided to sign on,” said Rebollo.

After writing some personal pieces for the production, Rebollo’s role expanded to performance.

“I have a drag character named Frida Kahlor, and she’s a powerful woman herself but she also pays homage to powerful women throughout history, and she’s very proud of her Mexican roots, so I tried to incorporate some of that into my costume,” said Rebollo.

Elle Shaheen ’21 was drawn to the course for its fluid approach to theater and the opportunity to build a unique show from the ground up with peers.

“Having Carmelita and [assistant director and teaching assistant] Annabeth Lucas guide us in the creation of the show has been incredibly helpful and has made the class a full collaborative experience, which is not something that happens often when you’re restricted to a director-cast dynamic in a rehearsal room,” said Shaheen, a Theater, Dance & Media concentrator who was also one of the first women in the cast of Hasty Pudding Theatricals.

“We in TDM are trying to offer students the kind of experiences they are not likely to find in the expansive extracurricular theater world at Harvard, to both expand their notions of what theater and performance can be, and to enable them to become producers of their own original work,” said James Stanley, the department’s artistic producer.

Tropicana explained that the show came together in the spirit of what she called “available-ism,” in keeping with her experience as a cabaret performer.

“Where Machine and I come from, in the downtown New York theater world, we use what some people call ‘available-ism,’ to use what is available to us,” said Tropicana, pointing to the ship set, which was repurposed from the Harvard-Radcliffe Gilbert and Sullivan Players November performance of “H.M.S. Pinafore.” She also highlighted the students’ commitment to working together to design the show despite different aesthetic styles and personalities.

For Tropicana, seeing students collaborate on everything from songwriting to stage direction was one of the greatest rewards of teaching the course.

“It’s about trying to find out about each individual student and trying to bring out the best in them. I wanted a cabaret that was collaborative with themes that united the students, and they did that,” said Tropicana. “The show is about Harvard, but it is also about moving forward and looking at the future. I wish we had more time, but as Leonard Bernstein said, ‘There’s never enough time.’”