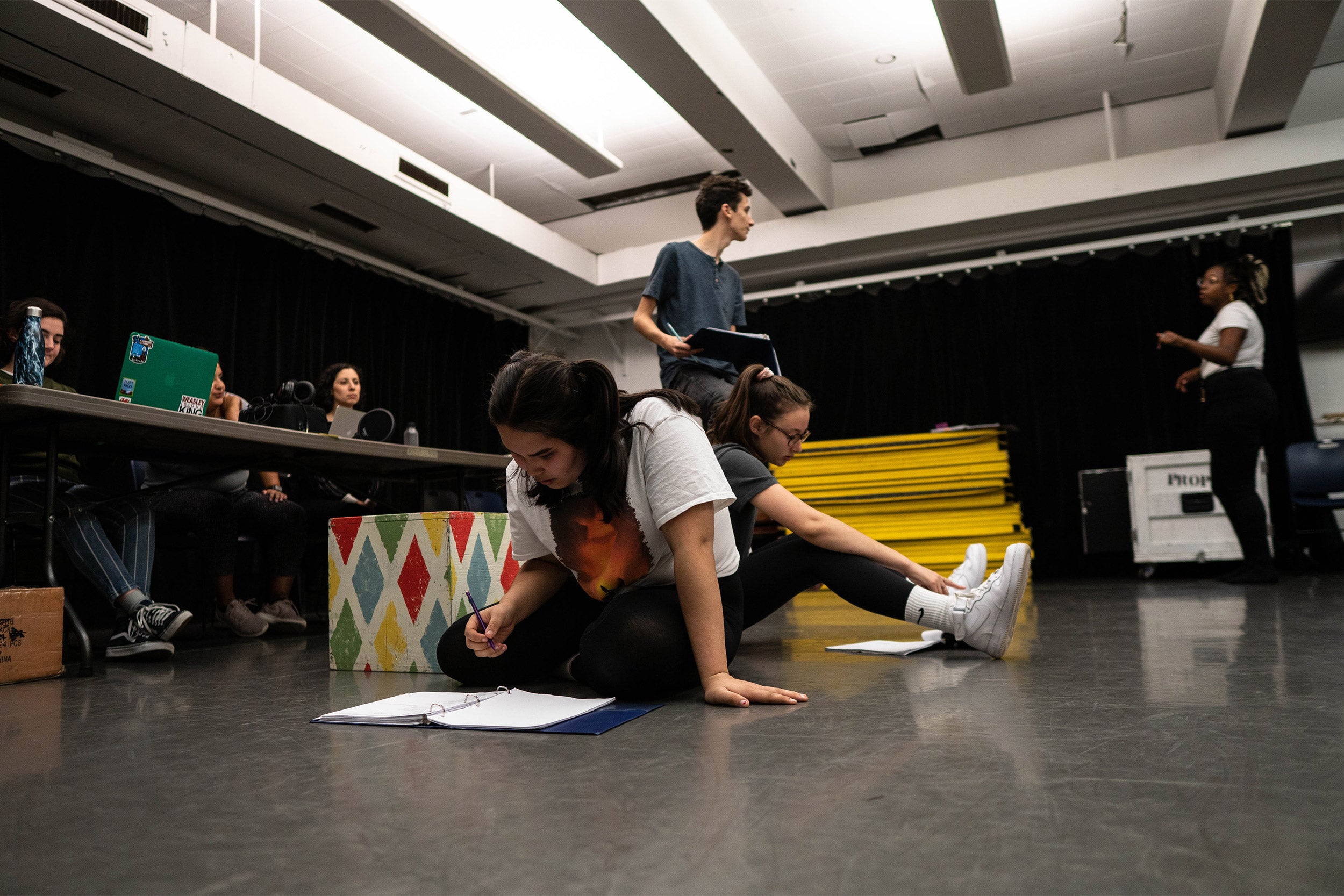 Sharing their world, learning from others strengthens both communities

Just like any student at Harvard, Swami Sarvapriyananda had dreams about what he would do when he grew up.

As he sits in a classroom in Rockefeller Hall on Harvard Divinity School’s (HDS) campus wearing his distinctive orange robes, he recalls what he wrote down as his top two choices while at school in his hometown of Bhubaneswar, in the eastern part of India.

“No. 1, be a pilot, and No. 2, find God,” he said, smiling at the recognition that this is perhaps where his story begins to depart from others’.

Swami Sarvapriyananda, who goes by just “Swami” when there aren’t other swamis around, describes himself as a bookworm, and attributes his early interest in the spiritual life to a childhood without cable television or internet. He could keep himself busy with the books his parents had around instead — books on the Bhagavad Gita or Swami Vivekananda.

Now a monk of more than 25 years in the Ramakrishna Order, Sarvapriyananda is the current minister and spiritual leader of the Vedanta Society of New York and one of three Hindu monastics in residence at HDS this school year. They are the first to participate in a new program made possible by a generous gift from Vibhu and Ajit Nagral out of their interest in strengthening the Hindu presence on campus.

Francis X. Clooney, S.J., Parkman Professor of Divinity and professor of comparative theology, explains that this new program will be similar to the Buddhist Ministry Initiative, which began in 2012 and has provided scholarships for monks to come from Asia for a year of study at HDS.

The new program at HDS has two main objectives: to enrich the HDS community, and to enable the participating monastics to return to their communities with expanded horizons. Two months into the semester, these aims are already flourishing — in both formal and informal ways.

The three monastics are easy to spot on campus. As Brahmacharini Shweta Chaitanya of Houston’s Chinmaya Mission quipped, “We dress quite loudly.” Her bright yellow robes indicate that she is, in her words, “a monastic in training.” Her Nike trainers and cardigan sweaters, however, signal that she and the other monastics don’t shy away from the modern world.

Sarvapriyananda says he is open to taking questions from the curious.

“I’d be delighted to talk about monastic life, Vedanta, or Hinduism — whatever they’re interested in,” he added. “It’s one of the reasons we’re on campus, actually — to be available.”

Before coming to Harvard, Sadhak Akshar, an aspiring Bochasanwasi Akshar Purushottam Swaminarayan Sanstha (BAPS) Swaminarayan sadhu from Gujarat, India, who wears an all-white uniform, wondered how people in the U.S. would receive him.

“But from the very first day,” he said, “this hasn’t been a question for me. People accept you as you are and respect you.”

He has felt more than welcome, in fact, with many people asking whether he has the necessary clothing to survive a New England winter, and some even offering to take him shopping. He appreciates the kindness he has encountered, recognizing that as a resident of the Center for the Study of World Religions (CSWR) on the HDS campus, he lives in “a bubble inside a bubble.”

The grounds around the CSWR provide a quiet place for meditation and study and remind Akshar of Sarangpur, India, where he spent three years with guru Pramukh Swami Maharaj and was inspired to begin his monastic journey. Akshar’s eagerness to learn, easy-going demeanor, and generosity with his Gujarati cooking helped him make friends easily, and he’s thrilled to already have forged “strong bonds” with people from Jewish, Muslim, Buddhist, Christian, and other Hindu traditions.

This is a priority for Akshar both because of his guru Mahant Swami Maharaj’s teachings on unity and fraternity, and because of a teaching from the Vedas he can quote: “Let noble thoughts come from all the directions.”

He interprets this to mean that “whatever is good anywhere, in any religion, we accept it.”

In addition to these kinds of informal interactions, Akshar and the others, who have devoted years to studying their own traditions, are enrolled in courses to learn about new methodologies and traditions. While Akshar and Chaitanya are taking classes on Buddhism and Christianity, Sarvapriyananda is enrolled in a number of philosophy courses — both Eastern and Western. All three are taking Clooney’s “Introduction to the Upanishads,” which are “some of the oldest and most famous primary texts of Vedic and Hindu India, ranging from before 700 B.C. to 200 B.C. and later.”

Daniel Sanders, a first-year M.T.S. candidate also in the class, said he was “excited by the opportunity to study these texts with those who have made it their life’s focus to absorb, contemplate, and practice the wisdom found there.” He added that their in-class Sanskrit recitations of the text and insights into interpretation have added “a joyful new dimension to my classroom experience.”

“I’m sure when I go back to India, I’ll probably be asked to give talks on my Harvard experience.”
— Swami Sarvapriyananda

In addition to enriching group discussions, the three monastics have given class presentations about how the Upanishads are studied in each of their traditions. Chaitanya’s two-year residential Vedanta course in Mumbai, India, for example, was entirely different from the kind of objective, academic approaches she was exposed to while pursuing degrees in Sanskrit at the University of Texas, Austin, and at Columbia University.

Her experience in India was totally immersive: “There was a lot of lifestyle change that was considered necessary to imbibing the teaching of the Upanishads,” she said, like what time you wake up and what kind of food you eat. “It was almost like being able to take what we studied and to relate it to your every moment. I thoroughly appreciated that style of learning and teaching. It was very inspiring.”

Despite years of studying the Upanishads, the monastics also feel they have much to learn from their professor and classmates. Parsana said he is enjoying encountering new perspectives. The students from different religious backgrounds, he said, bring questions to the text that he’s never considered. This kind of exchange is exactly why Chaitanya pursued the opportunity to come to HDS.

“I thought it was nice to bring in the theologian’s perspective along with the academic perspective and work collaboratively to think about Hinduism,” she said. “I wanted to be a part of that to whatever extent I could.”

Chaitanya hopes to be able to bring some of this perspective back to her community, and Sarvapriyananda is also eager to share how things are done at HDS with the acharyas in India who run the monastic training centers.

“They want to know what it’s like, what are the teaching methods, how do the students respond to the material,” he explained. “I’m sure when I go back to India, I’ll probably be asked to give talks on my Harvard experience.”

For Akshar, who has never had the chance to engage in much interreligious dialogue, the lesson he hopes to take home is the community experience itself.

“At Harvard, everyone can have dialogue across the table,” he said. “And this is a nice thing. And now when I go back, I will be more confident in continuing this dialogue, because it is coming from experience.”

“On Being a Hindu Monastic: Personal Journeys,” a conversation with Sadhak Akshar, Shweta Chaitanya, and Swami Sarvapriyananda, on will be held 5 p.m. Monday at the CSWR. All are welcome, but please RSVP via the online form.