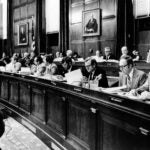 In Q&A, Harvard co-chairs discuss findings at University, 32 other institutions

Last April, the University convened the Harvard Student Survey on Sexual Assault & Misconduct, a tool designed to continue to guide policies that encourage a healthy, safe, and nondiscriminatory environment across campus. Today, Harvard announced the results to that survey in an email from President Larry Bacow.

Similar surveys were administered at 32 other institutions of higher education as part of a cohort convened by the Association of American Universities (AAU). This is the second time Harvard has participated in such an AAU survey; in 2015 the University played a leading role in articulating the need for, and helping design, the study.

The results from this year’s study say the prevalence of sexual violence at Harvard and other participating universities persists at the same level as in 2015. The Gazette sat down with Deputy Provost Peggy Newell and Cahners-Rabb Professor of Business Administration at Harvard Business School Kathleen McGinn, who co-chaired the steering committee focused on the survey’s implementation, to discuss the results, and what they mean for both the Harvard community and the culture of American higher education.

GAZETTE: This year’s survey represents the largest data set gathered around student experiences with sexual violence, and the survey itself was an in-depth instrument. You’ve both spent a lot of time looking at the data. Can you give us a sense of some of the most important takeaways, based on what you’ve learned?

Newell: First of all, I want to extend my gratitude to the more than 8,300 individuals at Harvard, and 180,000 nationwide, who took the significant step of devoting their time to respond to this survey, which took up to 45 minutes to complete. We asked individuals to respond to very difficult questions. In some cases, these questions may have caused students to remember difficult life experiences. This was not an easy survey to complete. It says a lot about our students that so many were willing to take part. Without them, we would be rudderless in our work to create a better Harvard, free from sexual harassment and assault.

In short, the results are deeply disturbing. Broadly, Harvard students, and students nationwide, experience sexual violence at the same levels as they did in 2015. In both 2015 and 2019, survey responses reveal that slightly over 12 percent of Harvard students have experienced some form of nonconsensual sexual contact since coming to Harvard. This is unacceptable, and we must do more, together, to find ways to prevent sexual harassment and assault from occurring in the first place, and then to connect students to needed supports once they’ve experienced an incident.

GAZETTE: Can you get into some of the specific drivers behind these incidents, who committed them, and where they took place?

Mcginn: Overwhelmingly, at Harvard and at the 32 other AAU member participating institutions, the survey found that sexual assault occurs between students when alcohol has been consumed, and in on-campus housing. At Harvard, 80 percent of all reported incidents of sexual assault involved alcohol, and more than 75 percent of the incidents involved an offender who was a fellow student. For undergraduates, two-thirds of the incidents of sexual assault reported in the AAU survey took place in on-campus housing. This says to me that if we’re going to make change happen, we need to engage our community in the work.

As members of the University leadership, Peggy and I take these results very seriously, and we recognize that we have a responsibility to each and every member of the Harvard community to respond to them, and to find ways to create a safer place to learn and to work. We will continue to work hand-in-hand with our Title IX Office, OSAPR (Office of Sexual Assault Prevention and Response), and Harvard’s Schools and units to develop programming and resources to best serve our community. But if we want to achieve our goal of preventing sexual harassment and assault before it happens, we need to do much more. Programming and resources are necessary but not sufficient; changing the culture in our community requires the input of each of us, faculty, staff, administrators, and especially students.

GAZETTE: The results of the 2015 survey helped guide significant changes to the University’s Title IX Office, its policy and procedures, and the resources offered across Harvard. What are your hopes for how the 2019 survey can positively influence the community?

Newell: Kathleen makes a critical point, that to get to where we want to be, a community free of sexual violence, we need to do the hard work of changing our culture, both here at Harvard and nationwide. We will continue to do the work of providing the best possible resources to our community. Since the 2015 survey, more than 65,000 students, faculty, and staff have participated in our online Title IX training module and/or through in-person training sessions. More than 50 trained Title IX coordinators support Harvard’s students, faculty, and staff across the University. Title IX student liaison and Title IX staff liaison committees have been formed to ensure that each School and unit is represented in conversations about how the Title IX Office can best provide its services across Harvard. Just this past week, the Title IX Office launched an online anonymous disclosure form as an additional tool for reporting an incident. Through Harvard University Health Services, OSAPR offers support to survivors, programming aimed at prevention and community education, and self-care programming for students. Each of our Schools has local efforts and programming aimed at making our community one that does not tolerate sexual harassment and sexual assault.

I think most critically, though, and the survey shows this, is that we need to find ways to help students support their peers, and to be willing to intervene, both directly, and indirectly, when they see a classmate or colleague who needs help. We want students to think about what they can do to improve the culture of the institution, toward making it a safer place, to know that they can come forward when experiencing an incident, and that we are here to support them.

Mcginn: One way we can help to support this kind of cultural change is by offering widely available, high-quality, bystander-intervention training. These programs are running in some schools and have been piloted with staff. While there’s very little data out there about what helps prevent sexual assault and violence on campuses, studies from Harvard sociology Professor Frank Dobbin do show that when peers, and in particular men and people of authority, participate in these types of trainings within organizations, progress can be made. Engaging the community in bystander-intervention programs has the potential to help students advocate for others, and think more carefully about their own behaviors, too. One encouraging finding from this year’s AAU survey is that a majority of Harvard students said they engaged in some kind of action when witnessing other students involved in various incidents that may have led to sexual assault or harassment. We need to continue to work with students to recognize and act in potentially problematic situations.

We also need to ensure that those who experience sexual assault feel safe accessing the resources and support they need and want. There is a wealth of resources available to students at Harvard. This year’s survey showed that students are more aware of the available resources than they were previously. But many students who experience sexual assault and harassment choose not to access these resources. Students cite that the incident wasn’t “serious enough,” that they weren’t injured, that alcohol or drugs were involved, or even that “events like this seem common” as reasons to not access any of the support services available on campus. We need to respect some students’ preference for seeking support from family and friends, and acknowledge the effectiveness of this approach. At the same time, students, faculty, staff, and University administration need to work together to make it clear that sexual assault is unacceptable and to communicate that all sexual assault is — and will be treated as — “serious enough.”

Community members who would like to learn more about the data can attend a town hall conversation about the results on Thursday at 6 p.m. in Science Center Hall C. The Longwood campus will simulcast the session at Snyder Auditorium in the Kresge Building at the T.H. Chan School of Public Health.