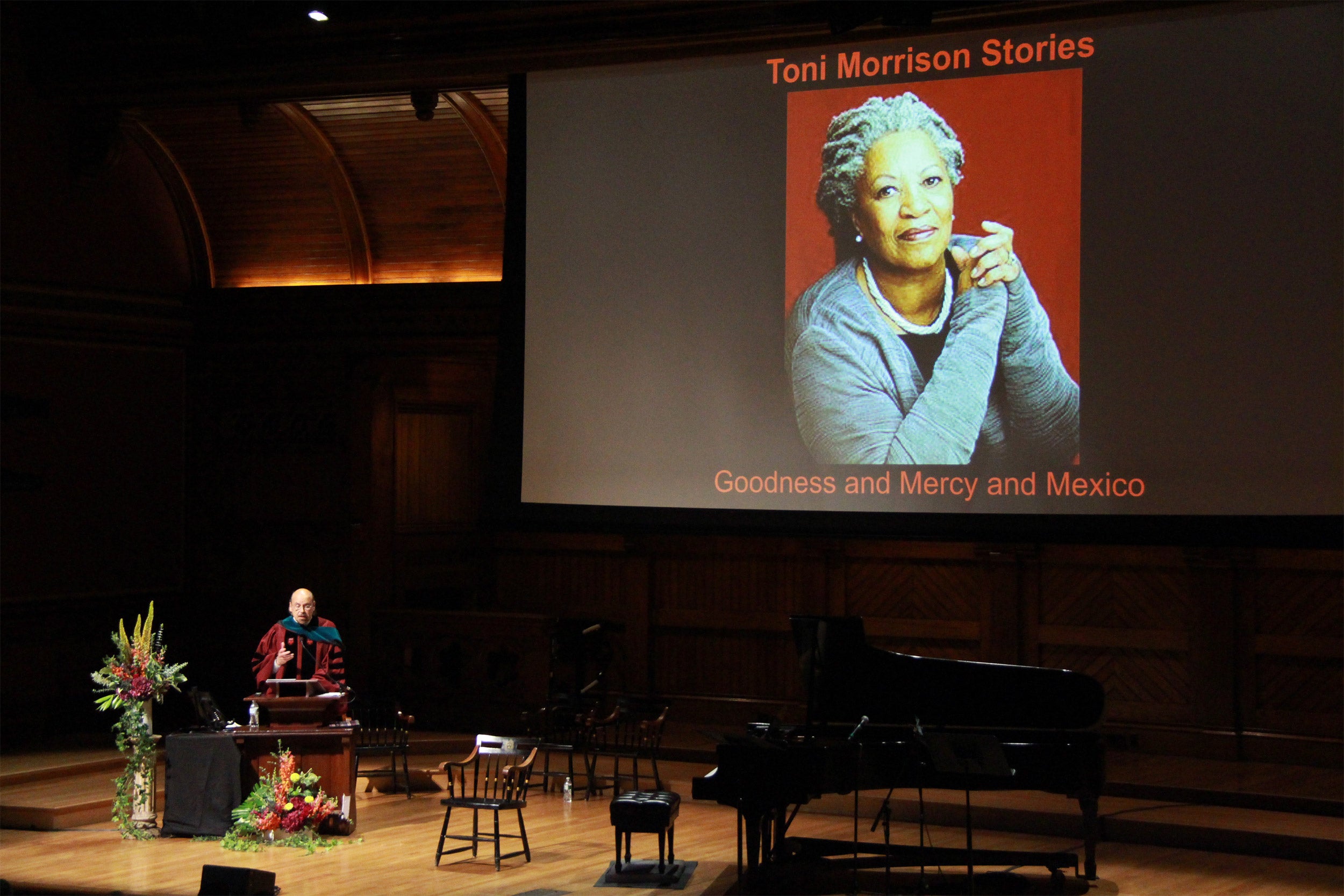 A sampling of the season’s best in local music, theater, and visual arts

It’s hard to let go of summer. A saving grace is that fall is so wonderful here, full of vivid color, sunny days, cool nights, apples, cranberries, pumpkins — and a bumper crop of culture. What follows is our opinionated picks for some of the best music, theater, art, and performance coming to the city this semester. You won’t even have to venture far from Harvard Square to attend many of these events and exhibits, but since it’s healthy to take a break from work or study, we’re sending you on a bit of field study as well.

One of this fall’s big events for both theater and music comes from a man who’s had a foot in both camps, the art-rock pioneer David Byrne. Last year Byrne mounted his “American Utopia” tour, in which the songs — many of them stemming from his creative heyday with Talking Heads — were enlivened with inventive staging and dance, something he’d previously explored in collaborations with choreographer Twyla Tharp and in the Heads’ landmark concert movie, “Stop Making Sense.” The tour was so well received that it’s going to Broadway this fall, but it will first make a stop at the Emerson Colonial Theatre from Sept. 11-28. Someone at the Colonial is enough of a fan to bill this as a “once in a lifetime event” — of course borrowing the title of a Talking Heads classic that Byrne will be performing.

Theater also meets pop culture in “The Purists,” the latest in the post-Hamilton trend of hip-hop musicals. Directed by Billy Porter of “Kinky Boots” fame, and written by locally-based Huntington Theatre Company playwright Dan McCabe, the show begins with a rap battle between two female DJs. Unexpected utterances are aired,  and the main characters, which include a retired rapper and a “show-tunes-loving telesales director,” wind up taking hard looks at who they are and what holds them together. The Broadway-bound show runs through Oct. 6 at Calderwood Pavilion.

Highly unlikely musicals seem to be the running theme at the American Repertory Theater this season. Nobody could have predicted that a rapping, dancing, sexed-up version of tale of the six wives of Henry VIII (beheadings and all) would be one of this year’s theatrical hits. But Toby Marlow and Lucy Ross’s “Six,” which continues its run through Sept. 29 at the Loeb Drama Center, has indeed pulled off the trick of turning this dark history into a celebration of “21st century girl power,” as they’ve put it. Another likely eyebrow-raiser is due Dec. 3, with the world premiere of composer/lyricist Dave Malloy’s adaptation of Melville’s classic “Moby-Dick,” in which the hunt for the great white creature becomes the occasion for songs including “The Whale As a Dish” and “A Squeeze of the Hand.”

Just off Harvard Square, the Oberon has carved a niche as the A.R.T.’s punky kid sister of a theater, with a reputation for daring cabaret-type shows. That tradition continues this fall when the Oberon presents “Black Light,” a one-woman show by Jomama Jones — the international soul diva whose hit-making R&B career suffered when she became a political exile from the U.S. during the ‘80s. If you’ve never heard of Jones, that’s because she’s actually the alter-ego of writer/performer Daniel Alexander Jones, whose one-character show interweaves original songs (inspired by the likes of Prince and Tina Turner) with monologues that explore cultural, spiritual and gender issues.

If you’ve ever seen a Kevin Smith movie (his biggest hits were 1994’s “Clerks” and 1997’s “Chasing Amy”), you know that the usual highlight is the appearance of profound stoners Jay and Silent Bob, who usually put the whole thing in perspective with a few well-chosen wisecracks. The pair recently got their second film of their own — Smith’s “Jay & Silent Bob Reboot,” due for imminent release — and the “road show” comes to the Wilbur Theater on Nov. 8, with Jason Mewes and Smith reprising their roles as Jay and Bob. A week later on Nov. 15, the Wilbur has another monologist of note, Al Franken. He should have plenty to say about his time in the U.S. Senate and as one of the best things that ever happened to “Saturday Night Live.”

On the rock ‘n’roll front, two of America’s most-adored bands are coming to Boston in October.  As far as many critics are concerned Sleater-Kinney have inherited the Clash’s mantle of “the only band that matters,” being fiercely topical and punk-rock exhilarating at once. Their new album, “The Center Can’t Hold,” has polarized some fans (there are, gasp, synthesizers all over it), but it’s still full of the hard-hitting lyrics you’d expect feminists from Olympia, Wash., to write in the Trump era. The band (which includes Carrie Brownstein of the satirical TV comedy “Portlandia”) should be worth a trip to the House of Blues — granted, one of Boston’s least comfortable venues — on Oct. 29.

Wilco, the band led by Chicago native Jeff Tweedy, was formed in 1994 as part of the back-to-roots Americana movement, but it has since branched off and now performs any kind of song Tweedy cares to write, whether it’s deeply personal or fascinatingly abstract (and the group’s guitarist, Nels Cline, is guaranteed to make your jaw drop). Over the summer Wilco hosted its Solid Sound festival in North Adams, and now it’s back to play at the Boch Center Wang Theatre on Oct. 10 and 11. Before leaving the rock world, we’ll point out that relative youngster Jenny Lewis is a brilliant songwriter who can break your heart with a love song or hook you in with a character sketch — just ask Beck and Elvis Costello who’ve worked with her. She too is at the House of Blues on Oct. 25.

Rhiannon Giddens is currently one of the bright young lights in roots music. As the frontwoman of the Carolina Chocolate Drops, she made old-time string-band music fresh and even fashionable again. But her musical explorations haven’t ended there, and she’s now touring with Francesco Turrisi, an Italian musician who plays exotic things like a one-stringed piano and a Tunisian frame drum. Their Sanders Theatre concert Oct. 3 will bring together some of the music they’ve been investigating, from Africa and the Middle East to the Americas. Count on Giddens to make you love all of it.

The stately halls of Sanders will also host the usual array of classical music this fall; as the Boston Chamber Music Society begins its monthly Sunday concerts on Sept. 22 with a Haydn/Shostakovich/Mozart program. The group will return Oct. 20 for a Clara Schumann/Harbison/Brahms program, and on Nov. 17 to do Schubert, Dutilleux and Elgar.

Godfrey Reggio’s 1982 film “Koyaanisquatsi” was a cultural moment, one of those rare occasions where a mind-expanding and avant-garde piece of art became a commercial success. Among other things it made a star out of the minimalist composer Philip Glass, who will revisit the music live with his Ensemble at the Orpheum Theatre on Sept. 20 to accompany a screening of the film. Glass and Reggio will also be interviewed the night before by Harvard Film Archive director Haden Guest. It’s at the CityScape space at WBUR’s Allston studio; tickets for the radio taping can be purchased in advance.

Women artists will get some overdue spotlight at the Museum of Fine Arts, where “Women Take the Floor” opens Sept. 13 and runs through May 3 to commemorate the 100th anniversary of women’s suffrage. The central space, “Women Depicting Women: Her Vision, Her Voice,” includes celebrated paintings from the MFA’s collection including works by Frida Kahlo and Alice Neel. Satellite exhibits will look at women’s contribution to 1920s and 1930s art and design; early female entrepreneurs in the print world; and abstract art from the 1950s. And two other sections bring some overlooked work to light: “Beyond the Loom” focuses on 1970s fiber artists who redefined textile work as sculpture; while “Subversive Threads” looks at more contemporary artists who’ve used textile work to examine political and gender identities.

The Harvard Art Museums have exhibitions on Winslow Homer’s seminal work concerning the Civil War, on what it means to be displaced from homes and cultures, and on critical printing techniques.

Another woman artist of note, Yayoi Kusama will be displaying one of her unique “infinity rooms” at the Institute of Contemporary Art through Feb 7. Arriving in New York City from Japan in 1957, Kusama absorbed the imagery of psychedelia and pop art. Created in 2013, “Love is Calling” is an installation that vaguely resembles the inside of a lava lamp, full of brightly-colored, tentacled figures; it’s accompanied by a recording of the artist reciting a Japanese love poem. A separate exhibit, “Beyond Infinity: Contemporary Art After Kusama” will spotlight artists who’ve built on her kaleidoscopic visions. 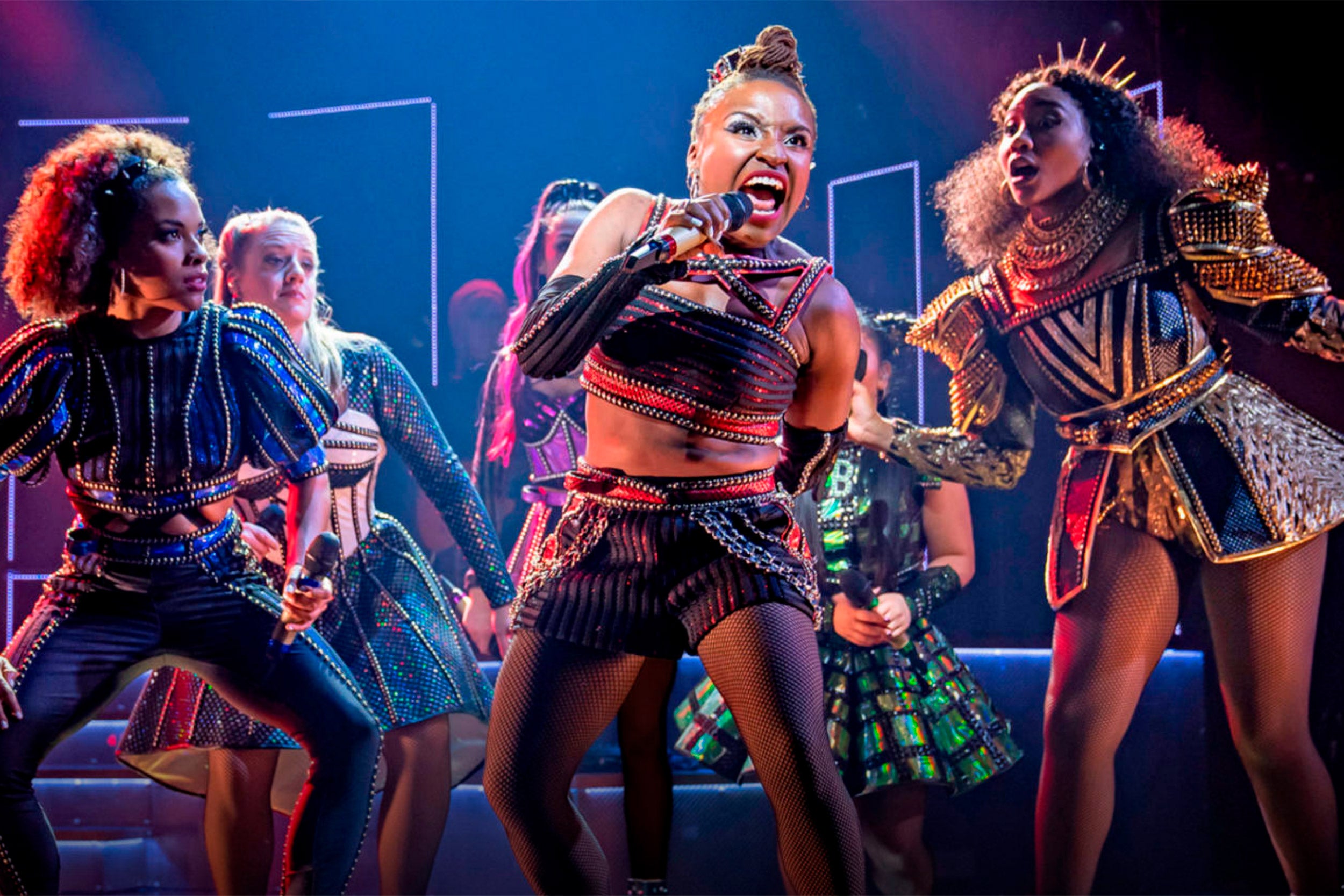 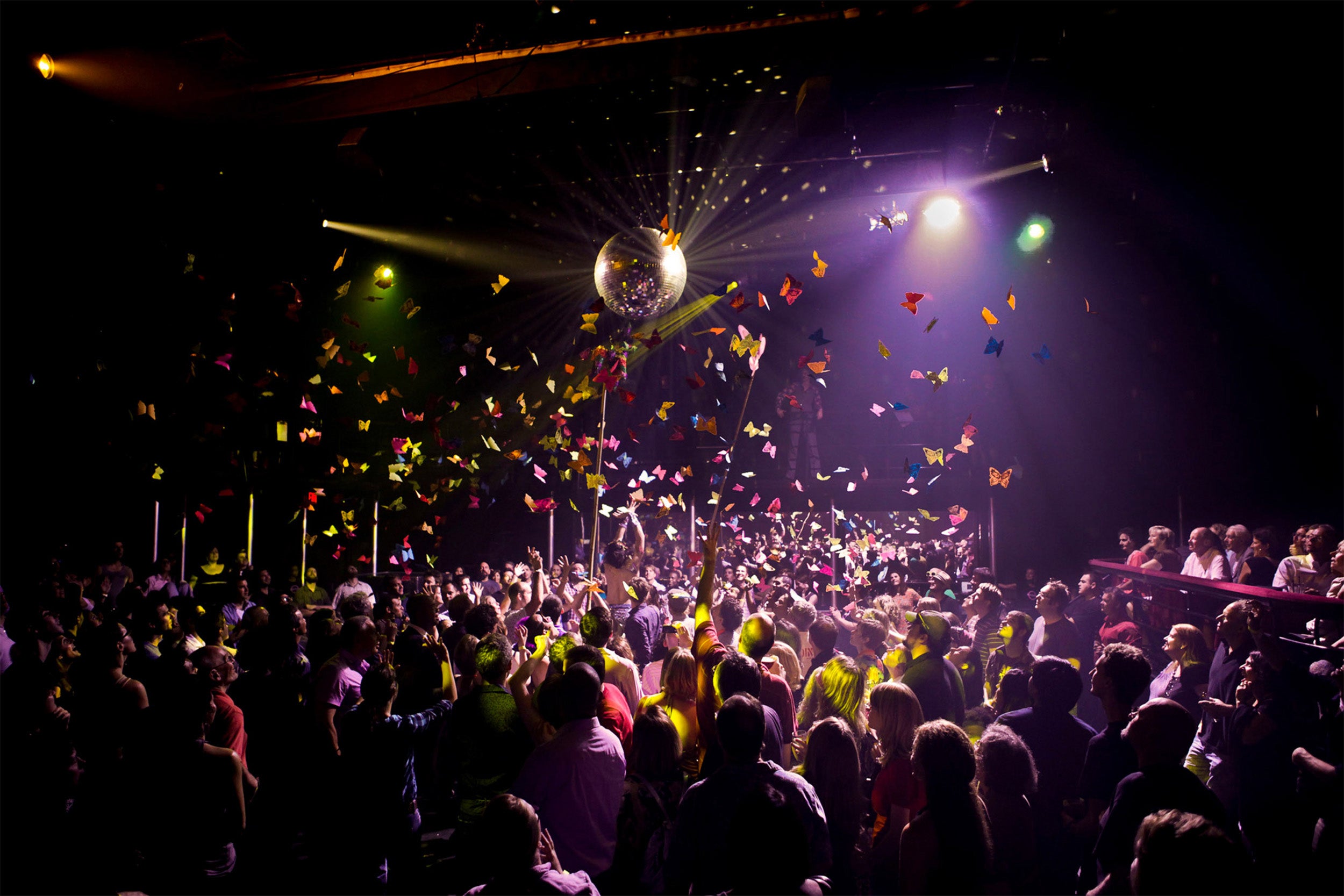 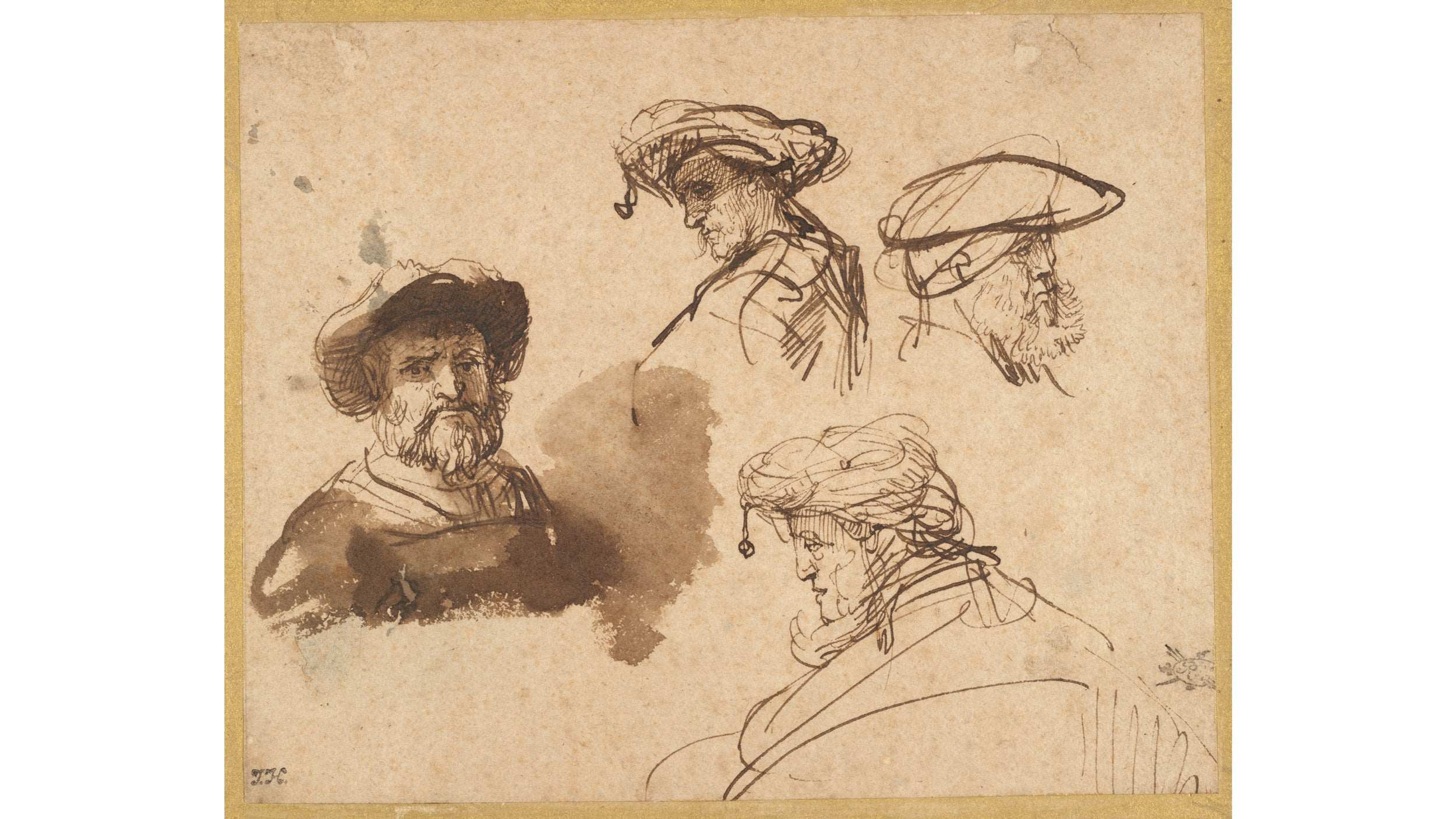