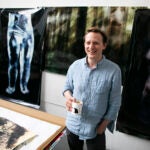 Photography without a camera

Wouldn’t you rather be remembered for how you lived than how you died? That’s the guiding spirit behind “Six,” coming to the American Repertory Theater (A.R.T.) Aug. 21–Sept. 29. The fast-paced musical reimagines the six queens of England’s King Henry VIII as girl-power pop stars, taking up microphones to sing about the lives they led before they were reduced to the simple mnemonic (recited during the show) “divorced, beheaded, died, divorced, beheaded, survived.”

Created by Cambridge University students Toby Marlow and Lucy Moss for the Edinburgh Fringe Festival, the strikingly modern take on 16th-century English history aims to reveal the fighting spirit behind Queens Catherine of Aragon, Anne Boleyn, Jane Seymour, Anne of Cleves, Catherine Howard, and Catherine Parr. Appropriately, say the playwrights, the 75-minute musical, which at the A.R.T. will feature choreography by Carrie-Anne Ingrouille, orchestration by Tim Curran, music direction by Roberta Duchak, and stage direction by Lucy Moss and Jamie Armitage, began, in part, as a vehicle for empowerment. The production is bound for Broadway after its limited Cambridge run.

The original impetus for “Six” was to create something specifically for the annual Edinburgh festival. (The show then went on to London’s West End, where it would be nominated for five Olivier Awards, and this summer opened in Chicago as well.) To create a production that would stand out, said Marlow, the friends — who were then studying for final exams — decided they should focus on a famous subject (Shakespeare’s women were considered), popular music, and something that played with the form of the musical. Beyond that, though, “We really cared about representation,” said Marlow. “Something that had an entirely or majority female and nonbinary cast, because we have so many friends who are talented and funny and brilliant.”

Marlow suggested the six wives, most of whom were killed or discarded as Henry became increasingly desperate for a male heir. (Seymour, his third queen, died shortly after giving birth to his only legitimate son to survive infancy, Edward.) Although Moss was initially reluctant, a little digging revealed aspects of the women’s lives and personalities that had parallels in the contemporary singing and dancing celebrities the playwrights hoped to cast, giving the project relevance.

“Actually, the wives had a lot of agency,” even as they were subject to the machinations of their powerful families and the king, Moss said. Henry’s first queen, Catherine of Aragon, served as regent while Henry was in France. During that time, “She won a battle against Scotland,” Moss said. Henry’s first wife also used her personal connections and considerable influence to make her case with the pope when Henry wanted to divorce her. By doing so, said Moss, she “essentially forced Henry to break with the church.”

“Put in a certain position, they played their hands smartly,” or as well as they could, she said.

History, and the king, ultimately cast the women as rivals. But the show gives its singing, dancing queens a second chance at royal sisterhood, having the leads finally band together in song. That, too, is rooted in history, say the playwrights, even if it is less well known.

“There were quite a lot of times when they were supporting each other,” said Moss. “Anne of Cleves and Catherine Howard were really good friends, and Anne of Cleves took her under her wing. Jane Seymour was a lady-in-waiting for Catherine of Aragon.” Parr, the first English queen to publish a book under her own name, “had all-female study groups,” Marlow noted.

To bring these figures to life and to personify their particularly feminine power, the team turned to female superstars. “I love all pop stars,” said Marlow. “I have a deep-rooted admiration for them” — particularly Beyoncé, whom he called “an influence on everything I’ve ever done.” However, a full range of musical talent plays into the queens’ songs, which draw inspiration from Alicia Keys, Adele, and Jennifer Lopez as well as Queen Bey.

“It was really fun to match up the queen with the pop stars,” said Marlow. “And then use the different genres of pop music to show the influences” of the queens on each other.

“Like, we wanted Catherine of Aragon to have a really strong opening number,” explained Moss. She had the most Beyoncé in her, explained Marlow. At other times, the duo took a counterintuitive approach. For Anne Boleyn, Moss said, “We wanted something really disarming, where we laugh at the way historians see her as really calculating. Something fun-loving and chilled out like Lily Allen, Miley Cyrus, or Avril Lavigne.”

Moss said the pairings work because so many experiences are universal. “It was quite fun ’cause we’re resetting so much” — writing about family squabbles and jealousy, power struggles, and sexism. “And then we would be like, ‘Wow, that’s such a thing that happens today!’”