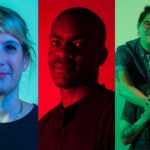 Creative research at heart of ArtLab

Recently, Joshua Jay broke the magicians’ code when he showed his Harvard audience the secret to a trick.

But it was OK, said Jay, a New York magician, author, and public speaker, because he was using it at an institution of higher learning not to expose but to create a teachable moment for those there to hear about his process.

At a packed Knafel Center Tuesday Jay carefully unveiled his literal sleight of hand. First he asked the audience to extend their hands, palms down; cross left wrist over their right and turn hands so both thumbs point down; interlock fingers. Later, when Jay told them to flip their joined hands over so thumbs point up, as he easily demonstrated onstage, his onlookers laughed as they struggled to comply. They couldn’t of course, because Jay had switched his hands in plain view, putting his palms together without them noticing.

“I didn’t just fool you,” he said, “you fooled yourselves.”

Jay pulled back the curtain on his craft during the Radcliffe Institute for Advanced Study’s 2019–2020 Kim and Judy Davis Dean’s Lecture in the Humanities, offering listeners a look at some of his techniques involving perception, attention, and surprise, techniques that have practical applications beyond the realm of magic.

The trick to his trick, said Jay, who interspersed his talk with a range of illusions, involved one of his favorite tools of the trade: mental misdirection. Unlike physical misdirection ­­— a loud sound, explosion, or other device that makes people look away from what he doesn’t want them to see — mental misdirection distracts the mind “so that you don’t perceive what I am doing.” Jay explained that when he instructed his listeners to wiggle the middle finger on their right hand while still clasping them together, it took “just a little more thought” and distracted them long enough for him to release his hands and clasp them back together.

For the man who once fooled the renowned magic duo Penn and Teller and holds a Guinness World Record for card tricks, a critical part of any good trick is immediate action, he told his audience, reminding them he had been on stage for less than a minute before he produced a champagne bottle and his own shoe from under what appeared to be an empty blue handkerchief. Such an approach could easily translate to the classroom, he said, where teachers are always looking for ways to grab their students’ attention. His performances always involve effort and enthusiasm, said Jay, another key to his process and an effective tip for teachers, students giving presentations, or anyone trying to hold a room or communicate something with a “hint of surprise or astonishment.”

“Bad teachers,” said Jay, “look like they are on autopilot.”

To guarantee the surprise factor that makes his tricks work, Jay also tries to think like his audience when coming up with new ideas, anticipating all the ways people might try to deconstruct one of his illusions and using that knowledge to ensure his “aha” moments are always unexpected. With magic, said Jay, “If you are asking the wrong questions, you are never going to find the right answers. You can identify what people are thinking and then turn it on its head. … I am trying to get to a point where I can predict how you’ll think and the pattern of your thinking, and I can disrupt it and I can enhance it.”

Radcliffe Dean Tomiko Brown-Nagin, who introduced Jay, acknowledged some might have thought it strange for Radcliffe to sponsor a talk delivered by a man who fools people for a living. But Jay, she said, is a master of communication, “something that is central to our endeavor.”

For Jay, magic has been in the cards since he was 7 and saw his father do a card trick. Fascinated, he spent the evening in his room, making charts and diagrams, and tearing up card after card. His thrill at cracking the trick was matched only by his delight at astonishing his father with it. That sense of excitement still drives his practice. Even a devastating waterskiing accident several years ago that left him with loss of feeling in some of his fingers hasn’t stopped him. He’s on the road performing 300 days of the year and practicing every free moment he can find. “I feel uneasy if I don’t have a deck of cards in my hands for most of the day,” said Jay.

And, like upstanding magicians everywhere, Jay is careful not to mess with the code. Magicians he said, are a tight knit, self-policing community, and anyone who steals tricks or exposes a colleague’s secrets is immediately shunned from their highly principled tribe.

“The ethics of magic are very specific,” he said.