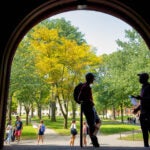 Service to country and community has long been a tradition at Harvard.

And, President Larry Bacow told a gathering of veterans on campus last weekend, “there is no higher public service than to serve one’s country in uniform, and each and every one of you exemplifies that.”

Bacow spoke to the newly formed Harvard Undergraduate Veterans Association at a reception and barbeque at Loeb Hall, organized by the Harvard Veterans Alumni Organization (HVAO). The groups are working to bring together veterans enrolled in different parts of the University and integrate them with the wider community.

“Everyone comes from different branches of the military, so their services were different. But they all wanted to serve in some way, so they all share that drive,” said Steve Petraeus, co-director of the HUVA, an Army veteran and third-year J.D.-M.B.A. student.

Bacow noted the University has had a longstanding relationship with the military, reaching back to the Revolutionary War when George Washington quartered his troops at Massachusetts Hall. That tie has undergone an evolution in recent decades, however. Referring to turmoil on campus over recruiting in the 1970s, Bacow said, “Fortunately we live in different times today.” At present, he said, “We are doing quite well. But there is still more to do, and we are going to do it.”

Harvard has increased efforts in recent years to recruit veterans, working with the Defense Department and conducting outreach via community college centers for former members of the military. The number of veterans enrolled as Harvard undergraduates is up this semester, with a total of 10 first-years and transfers entering this fall, compared with just six last year. In addition, Harvard now has 63 ROTC students including 25 first-years, doubling last year’s number.

The University also partnered with Service to School’s VetLink program in 2017, which helps veterans gain admission to the best possible colleges. The group was funded for its first year by Harvard veteran alumni.

To ensure veterans thrive on campus, Petraeus said, the student and alumni groups need to give them a little support.

“It can be a unique challenge to come back to an academic environment after years in the military,” he said. “We have fighter pilots who’ve been out for 13 years, so they could use a social organization. In the military you know the rules and you know exactly how the hierarchy works. Back in the academic world there are new questions, like how to talk to professors and what to call them, and how to talk to your classmates about life experiences they might not know about.”

Having veterans on campus is worth the effort, though, as it enriches the educational experience for all, said Col. Everett Spain, who received a doctorate of business administration from Harvard Business School in 2014. The veterans and ROTC students, the HVAO president said, “add a lot of diversity and experience to the Harvard community, and a ‘service to others’ spirit. We still have a lot more to do to fully integrate Harvard with the military, but the momentum is now underway.” 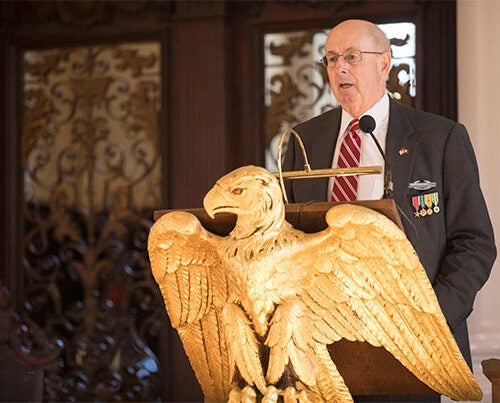 Tom Reardon ’68 couldn’t agree more. Reardon spent a year in Vietnam after graduating from Harvard. Decades later he formed the HVAO, the inspiration coming from an article in The Boston Globe. “There was a little controversy about the fellow in change of the New England Shelter for Homeless Veterans. He said that when he was in Vietnam, there was nobody from Harvard or MIT in his foxhole. I wrote that he should get on the Red Line and go to Memorial Hall,” built to honor the fallen Harvard classmates who fought for the Union during the Civil War.

The HVAO officially formed as an organization in 2006. “As a group we’ve lobbied and educated the administration, and worked closely with Harvard College,” said Reardon. “It’s our mission to honor the war dead and to build what I call Harvard’s military community across the campus, and that includes the alumni across the School — a number that’s potentially thousands.”