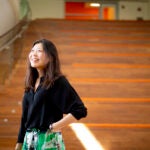 This is the one in a series of profiles showcasing some of Harvard’s stellar graduates.

Maj. Bradley DeWees knows what it’s like to perform under pressure.

DeWees grew up in New Mexico and was accepted to the Air Force Academy after graduating from high school. Neither of his parents attended college and both he and his family were overwhelmed by the college application process. By comparison, the Air Force seemed like the simpler option.

“I didn’t know what I was getting into,” DeWees recalled, yet he soon found himself thriving in the highly regimented, meritocratic environment.

“Being in that environment has a way to force you to forge really close relationships,” he said. “I found myself excelling and becoming a better person day in and day out — and that was reason enough to stay.”

Overcoming his early misgivings, DeWees did, in fact, go on to earn a master’s degee in international security and economic policy from the University of Maryland’s School of Public Policy in 2011.

Then in 2015, DeWees received a prestigious fellowship from the Air Force to pursue a Ph.D. at the Graduate School of Arts and Sciences in the public policy program affiliated with Harvard Kennedy School (HKS).

The catch? Complete the program in only three years.

Generally, Ph.D. candidates focus on coursework and exams for about two years before proceeding to the research portion of their degree. Without the luxury of time, DeWees began his thesis research as soon as he arrived at Harvard. His dissertation focused on judgment and decision-making with the goal of combatting ingrained biases, which he began exploring through experimental work.

Though most of those early experiments did not make it into his final dissertation, DeWees said it was “a critical learning step,” because it allowed him to allocate his time more effectively in his final year.

One of his advisers, HKS Professor of Public Policy and Management Jennifer Lerner, said they began with an intensive one-on-one tutorial in his first year to help combat his time pressure. This crucial tutorial spawned a number of research projects for DeWees.

“For Brad’s part, he found multiple ways to work at an accelerated pace,” Lerner said. “Long before he arrived to start school, he wrote to request in-depth reading lists. Once here, he made special arrangements with the building security guards so that he could be let in early in the mornings before the building is actually open to students.”

The transition from the Air Force to an academic lifestyle felt abrupt, DeWees said. Everything seemed different, including when the day begins. In the Air Force, operations are in full swing by 7 a.m. and tend to wind down around 3 or 4 p.m. By contrast, things are often “just getting started here” in late afternoon.

However, DeWees said, “I found myself dispositionally suited to the intellectual exploration lifestyle. What defines the daily experience here is, ‘What’s the next step?’”

In December 2017, DeWees also became a first-time parent, when he and his wife, Kate, had their son, Jackson.

Being able to step away from operational assignments for the Air Force to complete his Ph.D. has turned out to be a benefit to his family life, as “the odds of being deployed would not be insignificant,” he said.

“The first eight months [of the baby] turned into a blur,” he said. “We tried every possible combination of when to do work and ended up where we started; I work best in the mornings.”

DeWees’ advisers, Lerner and Assistant Professor of Public Policy Julia Minson, worked closely with him to beat the time-crunch while attending to his responsibilities as a new parent. He noted that having women as advisers was helpful because, he believes, they understand the challenge of balancing work and family life.

“Because Brad comes from a somewhat masculine/macho military culture, some of his military friends were baffled to learn that he had two female psychologists as advisers,” Lerner said. “All this speaks well for Brad’s open mind. When selecting his field of study, he was guided not by stereotypes about people or misconceptions about a field, but instead by the content and methods of the field itself.”

While at Harvard, DeWees had the opportunity to bear witness to the University’s “rich service tradition,” including visits to the Memorial Church where the names of veterans are inscribed on the walls.

“I hoped to be a representative of the military to the community at Harvard,” he said. “The opportunity for connection between people in the military and civilians is a lot harder now in a lot of ways. I hope we dispel some stereotypes.”

Upon his return to the Air Force, DeWees and his family will move to Fort Carson in Colorado Springs, Colo., where he will serve as assistant director of operations, working between the Army and the Air Force to provide air support to commanders on the ground.

He’s looking forward to getting back up to speed with operational work and being back in a position of leadership. DeWees hopes to use his academic training to help the Air Force improve its decision-making. He also hopes eventually to serve in strategic advisory positions — perhaps one day at the Pentagon.

“I’ll miss the vigorous intellectual back and forth that you can take for granted here,” DeWees said. “Demands are going to take precedence, but [I won’t] forget how fulfilling these past three years have been.”