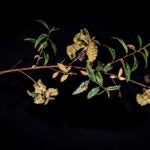 The marvel of fruit rotting

Moving in is the easy part. The challenge is making Harvard feel like home. To help with that, many students bring with them mementos that say a bit about who they are and where they’re from. The Gazette asked some first-years for a peek inside their suitcases.


As one of the newest players on the men’s tennis team, it’s no surprise that the most important thing Yim brought were his rackets — five of them. He said that he wouldn’t consider going anywhere for any length of time without them. After using a racket for a period of years, Yim says it comes to feel like an extension of his arm. Just as important is that the rackets remind him of lessons learned from the sport. “Tennis has been my passion since I was a little kid, and it’s taught me the values of hard work, dedication, and resiliency that have made me who I am today,” he said.


Oury is already making plans to host game nights with roommates and friends. She brought the card game Salem, in which players assume the roles of townspeople or witches during the Witch Trials. The goal is to root out who’s a witch and who’s not. Players make accusations, defend themselves, and make alliances. Where it gets interesting is how long those alliances last and who is trustworthy — and not. “There’s a lot of lying,” Oury said, laughing. “We’re definitely all playing.”


In the run-up to move-in day, Wurmser had a series of Post-it notes all over the house reminding her to bring her plants. The reason? “I just love plants,” Wurmser shrugged as she held two of them. “It makes the room lighter … prettier.” Among the ones she treasures most are the mints she uses to make her own tea. It’s something she’s been doing for five years now since she tasted it at a café near her home, and liked it so much she bought mint plants of her own. “You pick a bunch of the leaves, wash them, and put them in a cup with hot water,” Wurmser said. “It’s super easy.”


“I listen to music all the time so [that makes] them the most essential item,” said Hill, talking about his brand-new white-and-blue Beats headphones. Hill, whose father, also named David, graduated from Harvard Law School in 1991, said he has a deep love for music. “Hip-hop, R&B, pop, and all that — all the good stuff. Anything except for country music.” In fact, it’s so rare to catch Hill without headphones that after leaving them in his dorm Hill realized “this is the first time I put them down in like 24 hours.”


When he looks at his seashell, Deal remembers when “times were simpler,” unencumbered by a weighty academic schedule and a tangle of other commitments. His father gave the shell to him when he was about 3. It’s covered with the image of a Scorpio, along with the dates of his astrological sign (his birthday is Oct. 30). Blankets and stuffed animals were easily put aside as time passed, he said, but this childhood trophy “stayed on my desk for some 16 years.” At Harvard it’s already got a prime spot on his desk in Weld Hall to remind him of his “huge connection to my family.”


Yoon toted her most precious cargo across the country inside a sturdy black suitcase. “Music is an important part of my life,” she said. Yoon started with the piano before switching to clarinet 10 years ago. Music is what keeps her grounded, Yoon said. “It’s a nice constant to my life,” she said. Even when everything is changing, “I still have [music].”


Old memories to warm a new home, Hirshland’s pictures are of family, holidays, moments with friends in high school — like graduation and nights just hanging out — and reminders of his recent gap year volunteering on the South African coast. “I’m from Massachusetts so I’m not going very far,” he said. “But I guess it’s just nice to carry around some of high school with me. Make the new dorm, kind of, feel familiar.”


Prasad brought a bag of her mom’s ladoos, an Indian treat made with flour, butter, sugar, and varying other ingredients like saffron, chopped nuts, or raisins. “I don’t even know how to describe them,” said Prasad. “[But] they’re always shaped in a ball, and it’s a very classic Indian sweet.” Most of all they remind her of home and family. And though they aren’t gone yet, she’s already anticipating craving more.


Schrepferman’s relationship with coffee got off to a rocky start. When he first tried it in middle school he remembers “spitting it out promptly,” but his tastes changed — so much so that he couldn’t come to Harvard without his cold-brew coffee maker. The device, which he bought from “a certain alliterative home-goods store” makes five cups at a time, meaning he never has to go without and can even share some with new friends. “I feel like it’s a good conversation starter: “Do you want to come by and have some free coffee? It works out pretty well.”


Jara-Reynoso wears his most important item from home — a Kairos cross necklace he received for taking part in a retreat at his Jesuit high school. The cross, he said, symbolizes “our life through God … but also how we bond as a class.” Jara-Reynoso said that at the retreat he connected with his classmates, many of whom he didn’t know, on a deeper level. “I didn’t want to leave without it because in my opinion this is the reason I got into Harvard,” he said. “I was originally waitlisted, and when I was writing my [letter of continued] interest, I talked about the cross and the retreat and how through it I learned how to listen to other people and understand other people better, and that’s what I wanted to do coming here … in this environment it can be very easy to just focus on your own path and close yourself off to others, so this reminds me that I am here to talk to and open myself up to other people.”

From: Bethesda, Md.
Favorite item: A gift from a friend


Hong held up a square wooden sign emblazoned with her high school’s motto — “FIND A WAY OR MAKE ONE” — in all caps. It is meaningful to her partly because it was a gift from a friend and lacrosse teammate back in Bethesda, but also because she finds it inspiring. “I’m bringing this [mentality] to Harvard and [making] the most of every single experience I have here,” she said. 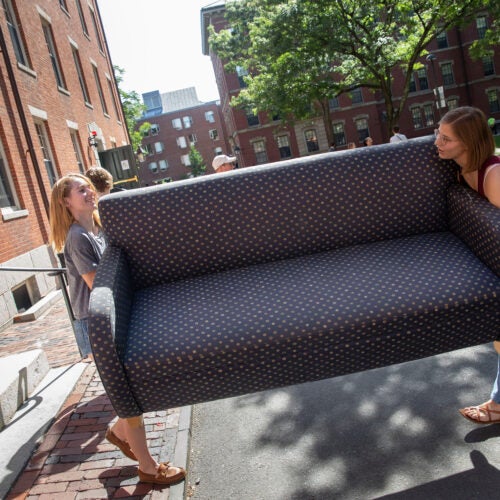 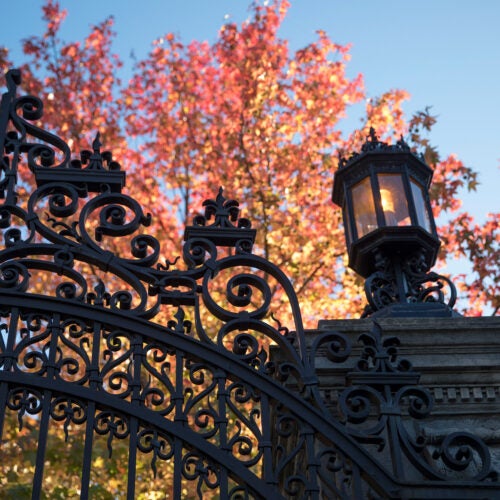 Strong yield for the Class of 2023