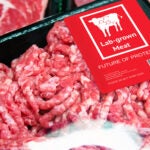 Sometimes disproving an old hypothesis is as important as proving a new one. In a new paper in Nature, Cassandra G. Extavour manages to do both, while helping create a tool that will enable similar big-data studies moving forward.

In “Insect egg size and shape evolve with ecology, not developmental rate” the professor of organismic and evolutionary biology and of molecular and cellular biology and her team analyzed a huge data set to debunk untested assumptions about the eggs of insects, which make up the majority of animal species on Earth. “If you count up all the different numbers of animal species, well over 80 percent of them are insects,” Extavour said. “However you want to measure it — number of species, number of organisms, bio mass on the Earth — it’s arthropods.”

Over the years much untested thinking about insect eggs, and those of other animals, has been allowed to persist. For example, one popular assumption has been that there is some kind of universal scaling law that means certain egg shapes can only exist at certain sizes. Other hypotheses have tried to relate egg shape and size to specific biological processes: the notion of larger eggs tending to be elongated for easier extrusion from the mother’s body, for example, or larger eggs taking longer to develop. For Extavour, whose focus since her undergraduate studies in her native Toronto has been on animal development, this was a key starting point.

“We asked whether or not some of these popular hypotheses held up if we looked at the data. And the quick answer is a lot of them didn’t,” she said. Across all insects, they found no universal scaling, no restriction of certain shape eggs to certain sizes, no evidence that larger eggs take longer to develop. Though related insects are likelier to have similar eggs, even the idea of genetic similarity was, as Extavour put it, “vulnerable.”

These findings alone, said colleagues, are groundbreaking. “I was really surprised to see that almost no correlations exist,” said Professor Siegfried Roth of the University of Cologne’s Institute for Zoology, commenting on the work via email. “The observations suggest that there are almost no constraints, i.e., no intrinsic [physical] laws, connecting the mode and speed of development to a particular size and shape of the egg.”

“We asked whether or not some of these popular hypotheses held up if we looked at the data. And the quick answer is a lot of them didn’t.”
— Cassandra G. Extavour

In addition to disproving these hypotheses, Extavour found that other considerations — such as the insect’s habitat or where it lays its eggs — likely play larger roles than previously thought. These factors, taken together as ecology, may prove even more important than the parent insect’s genealogical lineage.

“Dragonflies and mosquitoes are not each other’s closest relatives,” Extavour said. However, dragonflies that lay their eggs in water produce eggs that are smaller and rounder than other those of other dragonflies — and closer in shape and size to those of mosquitos. The water-laying insects “are really not related at all,” said Extavour. “And yet they both have this same behavior that they’ve evolved independently of each other.

“As a developmental biologist studying embryos, I find this really exciting,” she said. With her work focusing on the expression of DNA and how germ cells develop, Extavour sees this research as showing her a way forward. “It gives me some concrete data that I can use to test hypotheses about how the shapes and the sizes of eggs might impact the development of the embryo that’s happening inside the egg.”

The cutting-edge tools developed in her lab to examine large amounts of data will undoubtedly help others as well. Extavour credited Mary Sears, head of public services at the Museum of Comparative Zoology’s Ernst Mayr Library, and her staff, for the initial steps. Working with graduate students Samuel H. Church, Seth Donoughe, and Bruno A.S. de Medeiros, the team located and digitized more than 3,000 papers from the last 300 years, turning centuries-old notes and drawings into digitally searchable data. Using software created by Church, Donoughe, and Medeiros (the paper’s co-authors) searches for terms such as “egg size” or “egg shape” turned up about 1,700 papers that referred to insect eggs, and from these the team was able to cull about 10,000 measurements, some of which had been done by hand in the 18th century. 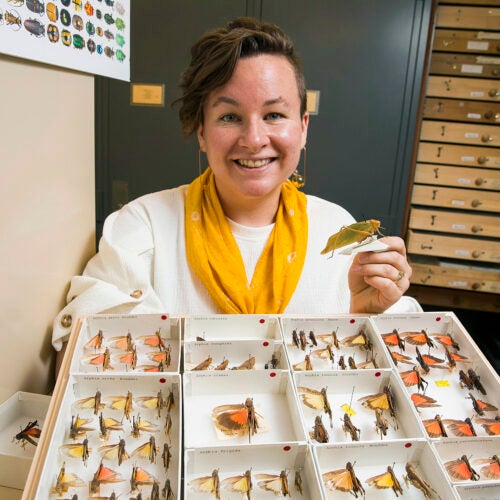 Mary Salcedo found a web of support while getting her Ph.D. in insect physiology 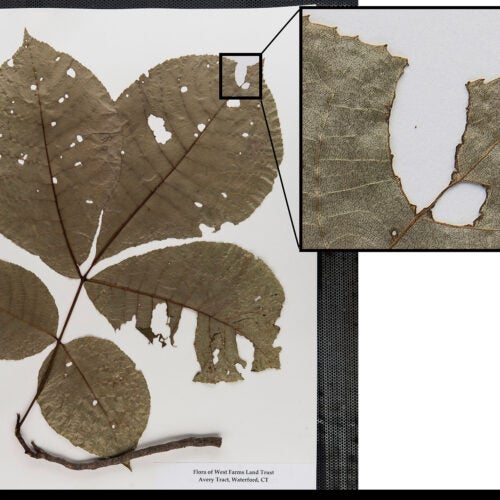 This enormous collection of data, which was manually verified, allowed Extavour to look at the larger issues. “Because people have established how insects are related to each other evolutionarily, we could ask questions like, ‘Are all beetle eggs the same shape or size?’ or ‘Do butterfly eggs tend to be a so-and-so type of shape?’” she said. “That was how we got into the problem, and that was how we assembled information to address the problem.”

“The study is an exciting, thorough, and thought-provoking piece of work,” noted her colleague Miltos Tsiantis, director of the department of comparative development and genetics at the Max Planck Institute in Cologne, Germany, via email. “The database Extavour and her coworkers created will also be a valuable resource for the community.”