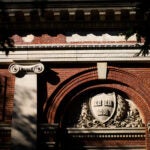 Mary Salcedo found a web of support while getting her Ph.D. in insect physiology

Mary Salcedo, Ph.D. ’19, who successfully defended her thesis on the dynamics of insect wings this past February, talks about bugs with a palpable joy. “When I started training my eye to look for insects, it was like trying to find buried treasure, but the treasure is everywhere.” Despite her current enthusiasm, insect research wasn’t always how Salcedo saw her future. “I was never interested in insects as a kid,” she said, adding that she hadn’t even taken an entomology class until her first year of graduate school.

While acquiring undergraduate degrees in biology and applied mathematics at the University of Washington, Seattle, she took a biomechanics class that she ended up really enjoying. One day after class, the professor stopped her and asked if she’d like to work in his lab. “I was like, ‘Yes, yes, yes, yes!’”

The lab studied insect flight and Salcedo became intrigued with the subject. “I would wire up a moth with 22 electrodes in its flight muscles and steering muscles,” she explains. “And the coolest part was, we hooked a speaker up to some of the muscles.” As the moth followed a light, its muscles would fire and the speaker would transmute the action into a purring sound that rose and fell as the moth flapped its wings.

Her biomechanics professor suggested she look for research technician positions, which is how she ended up working in Stacey Combes’ lab in the Department of Neurobiology, Physiology, and Behavior at Harvard. While there she applied to graduate school and was accepted to Harvard, Berkeley, and UNC Chapel Hill. She chose Harvard’s Graduate School of Arts and Sciences, where she was co-advised by Combes and Lakshminarayanan Mahadevan, professor of organismic and evolutionary biology.

Like all students, Salcedo encountered unanticipated challenges during her graduate program: Combes moving on to the University of California, Davis; problems getting insect eggs to hatch; acquiring an allergy to the grasshoppers she was studying. But two things kept her spirits up: swimming and the Society for Advancement of Chicanos/Hispanics and Native Americans in Science (SACNAS).

“What really got me through grad school was the fact that I joined a swim team,” she said. “It’s a U.S. masters swim team; there’s a coach, and I compete in swim meets. I didn’t swim in college or anything, but I’ve been on the team for two and a half years now, and I go swimming every day at noon.”

Swimming provided her with recognition of incremental improvements, sometimes lacking in busy graduate studies. “Faculty aren’t always good at saying, ‘You did the right thing.’ But the coach would be like, ‘Your arm’s a little funny. Work on this. Do this drill.’ And I would work on it and then he would say, ‘Good job.’”

SACNAS is a national STEM (Science, Technology, Engineering, and Math) organization that supports students from a multitude of underrepresented backgrounds. “It’s this beautiful place where people can completely be themselves, be their identity, and see other scientists like them,” she said, adding, “and then share their science and feel accepted.”

In addition to giving her a sense of belonging, SACNAS awoke in Salcedo a passion for mentoring. “I’m going to the SACNAS conference this October because as soon as you get a Ph.D. you can start to mentor,” she said. “If there’s something I love about science, it’s encouraging people.”

Salcedo, who identifies as Latinx and queer, ran the Harvard chapter of the organization with three other women. They hosted activities and events to share their scientific and personal experiences.

“We had a tenured faculty member talk about how, right after he got tenure, he was struck with a huge bout of imposter syndrome, and had to take an emergency sabbatical because he felt he didn’t deserve to be there,” she recalled. “I remembered that recently, because after I defended my Ph.D., I had a high for a few days and then I kept waiting for someone to come along and say, ‘You don’t deserve this, you didn’t do real science.’”

But, of course, she was doing real science, which she’ll have a chance to explore more of during her National Science Foundation–sponsored postdoctoral fellowship in the lab of Jake Socha, an associate professor of biomechanics at Virginia Polytechnic Institute. “He studies insect physiology, gliding snakes, and frogs that run on water,” she said, “so I’m excited to be using all of my biology background.”

Salcedo never stops asking how her research might apply to the larger world. “Every scientist should be asking that,” she said, “and if they can’t answer it, then that’s a problem.” For example, one thing Salcedo has studied as part of her work on insect physiology is the processes involved when a juvenile grasshopper unfolds its wings for the first time. “Their wings look like an origami pattern almost,” she said. “Grasshopper wings don’t form in a cocoon; they form in a structure called a wingpad. And when they do their final metamorphosis their wings are pulled out of their wingpad like a sword out of a sheath, unfolding and expanding.” That process, she explained, can be broadened to very practical areas, from soft robotics to an endoscopic camera that fans into a scalpel.

At Virginia Tech she’ll be wedding her love for science with her zeal for encouraging future generations of scientists. “I’ll be looking at circulation and respiration within the insect but will also be mentoring, teaching, and working in the community to develop more outreach projects about what it means to be a scientist, what a scientist ‘looks like,’ and how high school kids should start thinking about that.”

She expects to have a full plate. “There’s a lot,” she said, “too much for a two-year postdoc.” After a pause, she added, “But then you start thinking about the future Salcedo Lab.”