In search of Quentin Compson 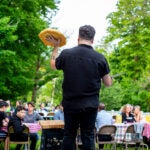 They made their pilgrimage from Mississippi to Cambridge for this moment.

Earlier this month, 17 devout fans of William Faulkner stood by a plaque memorializing the legendary novelist’s best-known character, Quentin Compson III, a troubled Harvard student from the Magnolia State who more than a century ago famously leapt from the Great Bridge to his death in the Charles River.

Ascending to the first alcove of what is now the Anderson Memorial Bridge, they read passages from the Compson novels, had a moment of silence, and recited the names of people they have known who have died by suicide.

The members of the Mississippi June Bug Society then each downed a shot of Jack Daniels and cast rose petals into the water before marching down to the abutment by the Weld Boathouse, where the plaque is located, and placing their hands on it in a final salute.

“Quentin Compson represents the defeat of the Old South and the sense of displacement which many young Southerners felt in the early 20th century,” said U.S. District Court Judge Michael Mills, a society member. “[Compson] also represents one of the great literary achievements of the 20th century by a Nobel Prize-winner and our fellow Mississippian, William Faulkner, so we are trying to remember Quentin and other friends we have lost over the years and to honor Mr. Faulkner.”

It was their love of literature — Faulkner in particular — and of their Southern roots that brought them together, members of the group said. They took their name from the numerous cultural events occurring in June that are linked to Mississippi and the South, including the musical suicide of Billie Joe McAllister, the subject of Bobbie Gentry’s “Ode to Billie Joe,” and Juneteenth, the holiday marking the end of slavery in the South. The group counts among its members U.S. Sen. Roger F. Wicker, Mississippi State Sen. Hob Bryan, and retired Mississippi Supreme Court Justice James L. Robertson, J.D. ’65.

“We have only been in existence as a loose band of old friends and new friends celebrating Southern culture for the last six months or so,” said Mills, who helped found the group. “We are very informal but already a tight-knit group.”

The June Bugs had been aware of the plaque for some time and had  wanted to see it, not only as a way of connecting with the character but because of the history behind the plaque itself.

“Quentin Compson represents the defeat of the Old South and the sense of displacement which many young Southerners felt in the early 20th century.”
— U.S. District Court Judge Michael Mills, society member

The memorial was installed by Stanley Stefancic, S.T.B. ’64, his wife, Jean, and their friend Tom Sugimoto in a private ceremony on June 2, 1965, the 55th anniversary of Compson’s literary death. It read: “Quentin Compson III/ June 2, 1910/ Drowned in the fading of honeysuckle.” In 1978 construction crews accidentally knocked it off, and a replacement was installed in 1983. The last line, however, was changed: “Drowned in the odour of honeysuckle.” In 2014, the plaque again fell victim to a major renovation project. Three years later, a new plaque went up with the original wording restored, according to Massachusetts Department of Transportation spokesman Patrick Marvin.

Compson, a central character in “Absalom, Absalom!” and “The Sound and the Fury,” was his family’s bright hope for restoring its ruined reputation. One of few Southerners then at Harvard, he felt hopelessly out of place and burdened by guilt. Eventually the introspective 19-year-old plunged into the river with flatirons tied to his ankles.

On the evening of the 109th anniversary, the members of the group had dinner at the Sheraton Commander Hotel, where they took turns reading personal essays on Faulkner and Compson. Some were more personal than others.

“I had an experience that was not totally different from what Faulkner gave Quentin Compson,” said Robertson, the retired Mississippi Supreme Court justice. He was a student at Harvard Law School in 1962, the same year the University of Mississippi desegregated, detonating riots that killed two people and required federal troops to quell. “I probably got on an airplane to fly to Boston to begin my Law School career I’d say nine days before the madness occurred.” 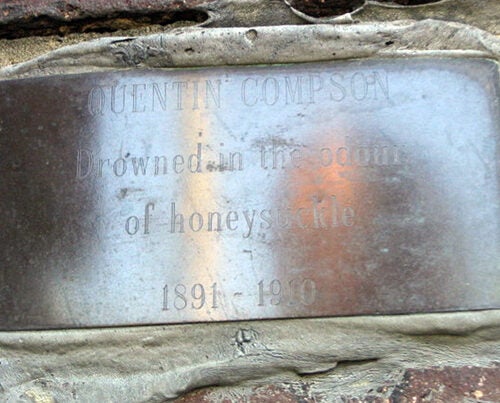 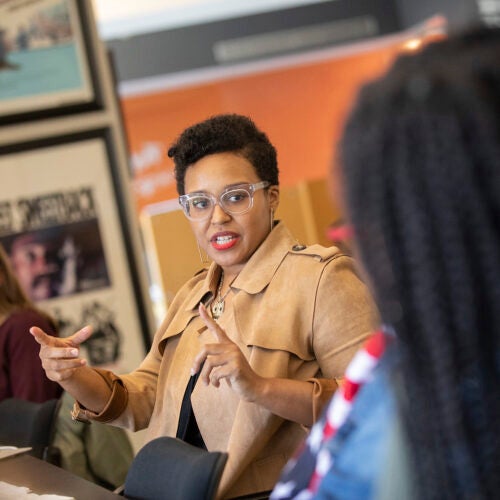 That left Robertson, like Compson, feeling “the responsibility and the burden of the sins of my home state.” He also felt out of place, as one of the few Southerners and one of two Mississippians in his class. Another jarring feature was being introduced into another culture, one with unfamiliar customs and privilege. “It was just a different world,” he said. Unlike Compson, however, Robertson persevered and went on to graduate.

After dinner, the group went to the Anderson Bridge for the final tributes.

With the success of this trip, the June Bugs have already started planning their next. It will honor the fictional McAllister, who jumped off that Tallahatchie Bridge on June 3.

“There is a lot of momentum to keep this going,” Mills said.