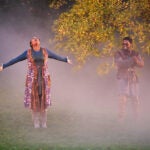 Linda Chavers’ knowledge of William Faulkner is encyclopedic. The lecturer in African and African American Studies, who first read the Nobel Prize-winning novelist when she was 19, owns four different editions of “Absalom, Absalom!” and can recite huge chunks of the narrative from memory. If you want to check, she can even point you to the correct page.

“I’m Faulkner all day, every day — maybe not the man, but the works,” said Chavers, who paired the white Southern writer’s work with that of African-American writer-producer Shonda Rhimes for her course “Faulkner, Interracialism and Popular Television.”

“Whenever I read something and it resonates, it stays with me the rest of my life,” Chavers added. “Absalom, Absalom!” is “a difficult novel to read, but for a really good reason. I think it helps students with their worldview, and develops an interdisciplinary type of mind.”

For the TV part of the class, Chavers turned to Rhimes, whose hit show “Scandal” was her go-to binge watch her last year of graduate school at Harvard — and more than a guilty pleasure.

“There was so much Faulkner in it,” she said. “I felt there was a lot of crossover between what I was reading and what I was watching … and I wanted to bring that into my work as a scholar.”

After completing her dissertation, “Violent Disruptions: William Faulkner and Richard Wright’s Racial Imaginations,” she created her first literature-meets-TV course in 2016 while teaching at Temple University.

Chavers opened a recent session of her Harvard course with a March 2017 “Scandal” episode titled “Extinction.” With her students seated around a conference room at the Hutchins Center, she paused before hitting the play button. Treat the episode “as a visual text,” she told them.

After the viewing, Bella Roussanov ’19 pointed to the episode’s theme of black bodies and who has ownership of them, while Jonny Adler ’19 noted the Darwinian language, quoting the character Eli Pope’s line “I’m not a predator. I am a very smart prey” when explaining his choices to his daughter, the show’s main character, Olivia Pope.

Adler, who is concentrating in history and literature, said he took the class to become better-versed in both Faulkner and Rhimes.

“I’ve seen a few episodes of ‘Scandal’ and ‘How to Get Away with Murder,’ but I’m not a longtime viewer,” he said. “I was looking for an excuse to engage with her work critically.

“I also haven’t had too much Faulkner and I wanted to force myself to read these novels. Dr. Chavers knows what she’s talking about, and I like how fun the class is, how it’s trying to make connections that aren’t obvious.”

Chavers places her connection to Faulkner in the context of growing up in Washington, D.C., in the late ’80s and early ’90s.

“Washington, D.C., was pretty segregated so I got to grow up taking my blackness for granted,” she said. “Then I went to NYU for undergrad, and found myself being asked fairly regularly what I was, and being pushed when I said African-American. It was one of my first times experiencing colorism and having something I felt to be natural questioned, as if I didn’t have a right to be black.

“This piqued my interest on a scholarly level and a personal level. I realized if I couldn’t be placed, I could be met with hostility, so when I read ‘Absalom, Absalom!’ my sophomore year I became fascinated with this story where I felt seen and heard in this Southern white man’s work of literature.”

Chavers noted that the class is largely made up of students with minimal knowledge of Rhimes and Faulkner’s work, which has helped prompt lively and surprising discussions. Meghan Onserio ’19 enrolled at the last minute, dropping another class to make room for it in her schedule.

“This class is a lot cooler than I thought,” said the history and literature concentrator from Minneapolis. “I’d never read Faulkner before and I was interested in seeing how popular television could engage in academic scholarship. Professor Chavers has been able to successfully connect the two as she provokes, invokes, and encourages us to think more critically about what we see in media and entertainment.”