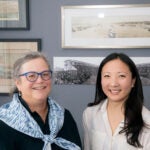 Pickering has been executive director of the Harvard Museums of Science & Culture (HMSC) since 2013. She was the first person to hold the post, overseeing public programming for a consortium of six partner museums: the Museum of Comparative Zoology, the Harvard University Herbaria, and the Mineralogical & Geological Museum (which collaborate as the Harvard Museum of Natural History), the Semitic Museum, the Peabody Museum of Archaeology & Ethnology, and the Collection of Historical Scientific Instruments. The Museums of Science & Culture will begin a search for a new director this summer.

Pickering will oversee the curation, care and conservation, and programming of one of the oldest and largest collections of cultural objects in the Western Hemisphere. The Peabody was founded in 1866 and houses more than 1.2 million objects.

“One of the most exciting aspects of the Peabody Museum is that there is enormous cross-campus interest in the collections and their potential. The museum is significant to faculty and students from across the University,” said Pickering. “The museum is also at a very critical point in its history. There has been a transformation in how we think about anthropological collections and how we address the profound challenges of their stewardship and interpretation. I look forward to building on the superb work that has already begun at the Peabody to take a leadership role in that arena.”

Concurrently, Gay is creating a Peabody faculty executive committee to work closely with Pickering and her staff on museum programming, community engagement, and curation. The committee will report to Gay.

“From the overwhelming number of responses to the canvass, it was clear that the Peabody has a large and engaged community invested in its future and that to fully realize our collective vision we need both the leadership of a world-class museum professional and robust faculty engagement,” Gay said in her announcement. “I am excited to have more faculty directly engaged in supporting the Peabody through this coming period of self-reflection and planning for the future.”

“Jane Pickering has been the powerhouse who has successfully led the Harvard Museums of Science & Culture through its formative first years,” said Donald Pfister, chair of its faculty executive board, curator of the Farlow Library and Herbarium of Cryptogamic Botany, and Asa Gray Professor of Systematic Botany. “From administrative and budgetary reorganizations to developing the public face of the museums, she has managed with good cheer and a delicate hand. Although the HMSC will be losing Jane, we are delighted that she will remain in our midst to undertake new and exciting challenges in the Peabody Museum.”

During the consortium’s first five years, museum attendance increased by 34 percent to almost 300,000 annual visitors. In 2017, more than 150 faculty members from FAS and other Schools participated in HMSC activities including curation, presentations, and program advising. Pickering also worked to expand the reach of HSMC programming in collaboration with other Harvard communities, including the multi-media event “Native American Running: Culture, Health, Sport,” co-sponsored with the Harvard Native American Program and the departments of Anthropology and Human and Evolutionary Biology, held in conjunction with the 2016 Boston Marathon.

“It is immediately reassuring and exciting to have Jane Pickering step into the role of director at the Peabody Museum,” said Lawrence D. Bobo, dean of the Division of Social Sciences, W.E.B. Du Bois Professor of the Social Sciences, and Harvard College Professor. “The Peabody is a rare and invaluable repository of history and material culture. Accordingly, we have special obligations of stewardship that are borne on a day-to-day basis by the museum director. Dean Gay has made a truly fitting selection in appointing Jane.”

“One would be truly hard-pressed to find a person who better embodied as rich a set of experiences in museum administration, public outreach and stakeholder relations, and deep appreciation of the research and teaching mission of a university-based museum than Jane,” said Bobo. “In her we have not only the combination of these qualities of museum expertise and savvy as well as a commitment to academic values, but someone who is already intimately familiar with and respected by Harvard faculty, those working in our various museums, collections and archives, and the larger Harvard community. I greatly look forward to working with Jane in this new role.”

“Jane is deeply knowledgeable about Harvard’s museums and about the challenges and opportunities facing our cultural institutions in these times,” said Martha Tedeschi, Elizabeth and John Moors Cabot Director of the Harvard Art Museums. “Her commitment to the care and stewardship of collections, and to access and learning opportunities for all, will situate the Peabody for maximum impact in the years to come. I greatly look forward to partnering with Jane in her new role and to seeing the Peabody flourish under her thoughtful and innovative leadership.”