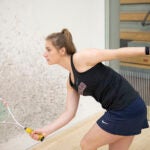 The first thing Dean Bniskiwitz did as an American citizen was hug his 9-year-old son. Jeff Mulumba thought about the 16 years it took him to get to this point. Ashok B. Dhanuk, an immigrant originally from Nepal, pondered the privilege and responsibility of being an American citizen, while Marta Tomascewska, originally from Poland, felt a sense of finally being home.

“You feel more connected. You feel a part of something,” said Tomascewska, who came to the U.S. five years ago shortly after marrying her husband, an American citizen. This was the final step in truly starting a life here, she said.

“Now I am here not as a guest but as a citizen,” she said.

It was a sentiment Tomascewska shared with 42 other people whose various paths became American stories when they were sworn in as citizens at a naturalization ceremony in the John F. Kennedy Jr. Forum at the Harvard Kennedy School (HKS). In front of friends, family, and members of the Harvard community, they raised their right hands and swore an oath of allegiance to the U.S., pledging to uphold its ideals and carry out their new civic responsibilities.

It was the first citizenship ceremony held at HKS and believed to be the first at Harvard, according to the U.S. Citizenship and Immigration Services (USCIS), which oversees the process.

Many Harvard community members took part in the ceremony, from the ROTC student who brought in the U.S. flag as part of the color guard from Harvard, MIT, and Tufts to the student who sang the national anthem to the judge presiding over the ceremony.

The newly minted citizens have lived in the U.S. between five years and more than 20. They come from 25 countries, representing almost every continent, including South America, Central America, Europe, Asia, and Africa.

They embody the melting pot the U.S. is known as, with countries of origin ranging from Albania to Colombia to Guatemala to the Netherlands. And like so many before them they originally came for many reasons — a better life, a better job, a spouse. Many said they were taking the oath to finally became a full part of their adopted home and join family members, including siblings and children, who were already U.S. citizens.

“You represent the highest ideals of our nation,” said Harvard President Larry Bacow at the ceremony. “The American dream is something to which all of us can aspire but which none of us should take for granted. And now as citizens you have a special responsibility, I think, to also ensure that this dream of a better life — this dream of citizenship — is made available to those who will now come after each and every one of you.”

Bacow, the son of immigrants, also spoke of the power of education in his life. “Education represents an important part of the American dream,” Bacow said. “It is a way to extend opportunity to the next generation.”

Bniskiwitz, watching with his son, agreed. He came to the U.S. about 20 years ago from Germany to study at MIT and hopes his son will go on to get a higher education as well. Keannam Goh, from Malaysia, came here with his family eight years ago, when he was 17. His father wanted Goh to have more opportunities than he had had. Goh finished high school here, went on to earn undergraduate and master’s degrees, and now works at an architecture firm. “It was quite a journey,” he said.

Ronnie Schum, from Hong Kong, felt the same. He joined his family here 10 years ago and is now finishing his degree at Boston University in computer engineering and philosophy. “It’s a year of transition,” he said, calling it the end of one part of his life and the start of the next.

“My fellow immigrants, it is with great pleasure that I welcome you as fellow citizens,” she told them. “Some years ago, I stood as you have stood — an outsider in a foreign land full of anxiety yet vibrant with hope. And, like you, I took an oath as old as the written constitution, forsaking all past allegiances and entrusting my future to the nation of people whose very fabric arose from the aspirations and spirits of untold thousands like us.

“I felt as you now feel and knew as you now know: The oath is no mere legal formality,” she continued. “It was rather an affirmation of faith and will. … I felt as you will feel: no longer a guest, no longer an outsider, no longer a spectator. I had become, as each of you has now become, a participant in that endless effort, which by assumption of responsibility for all, seeks to attain the perfect social compact. … Now you will be participants as well.”

Zobel urged them to register to vote at the special voter registration table organized by HKS, USCIS, and the city of Cambridge. Among the 35 who did was Lauren Karina Payano, who emigrated from the Dominican Republic almost nine years ago and decided to become a citizen to mainly to vote, she said.

“If I live in this country and I am thinking about spending my whole life here,” Payano said, “it’s important for me to become a U.S. citizen so that I can become part of the U.S.A. more completely and support it more completely.”

As she took the oath, she said she looked at the American flag and thought back to her history lessons for the civics test. “What came to my mind was those times people have fought for the independence of the U.S.A.”

Teresa Acuña, M.P.A. ’17, a daughter of immigrants who are also naturalized, led the planning of the naturalization ceremony. In her role as associate director of the Democratic Governance programs at HKS’s Ash Center for Democratic Governance and Innovation, she spends a lot of time thinking about civic engagement. Earlier this academic year, she helped support the Harvard Votes Challenge at HKS and thought a nice capstone to that effort would be to host a citizenship ceremony on campus and then do a voter-registration drive for those new citizens — something not commonly done at naturalization ceremonies.

“We think it’s an important thing to show the life cycle of what civic engagement looks like, [including] celebrating the tradition of creating new Americans,” Acuña said.

“I wanted to show that Harvard is a welcoming place, that we believe in the ability to reimagine oneself,” she added. “I wanted people to feel part of our democracy.”

Ultimately though, she wanted them to realize a long-held dream, she said.

For Jeff Mulumba, who left political unrest in his native Democratic Republic of the Congo, that’s exactly what she did. Swearing the oath and becoming a full participant in the country was a very emotional moment, he said.

“You remember the process of application of getting into the United States,” Mulumba said. “You think about those moments when you were wishing that you could get to the land of the free and that was just the only thing that you had in your mind.” 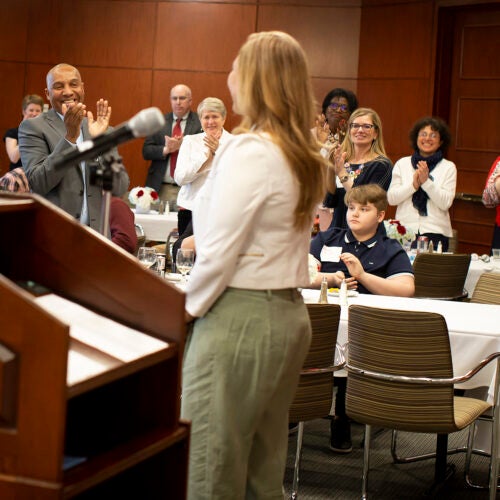 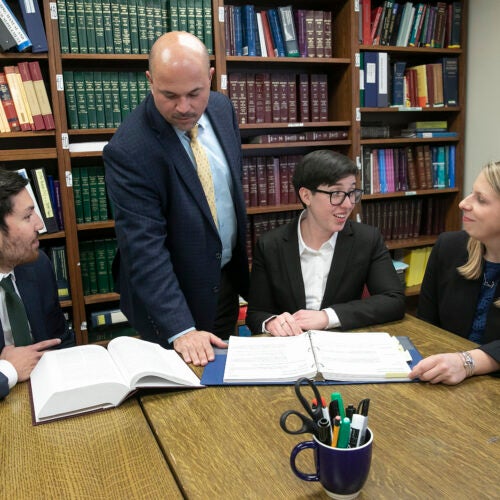