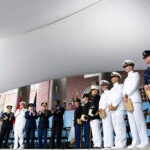 Adele Woodmansee has spent a lot of time outdoors.

In 2017, she took the fall semester off to finish her May-to-October thru-hike of the 2,190-mile Appalachian Trail. “I started late, so I had to do it fast,” Woodmansee said. The elaborate meals she cooked with her wood-burning stove earned her the trail name Pantry.

And like a well-stocked pantry, her 23 years have prepared Woodmansee for many contingencies. She grew up in a house built by her parents in Westfield, Vt., close to the border with Canada. The house and its extensive gardens are down a dirt road and a 10-minute walk into the woods; solar panels power the lights and there are no wall outlets. “I had a computer growing up, but I couldn’t charge it at home,” Woodmansee ’19 said. “And there was no internet or television.”

Her focus became music and languages. Taking up the violin when she was 6, she was eventually started composing for the Burlington Chamber Orchestra and participating in the Vermont Youth Orchestra. Through the Cooke Young Scholars Program, she studied Arabic and Spanish, and before she graduated from North Country Union High School, the Cooke scholarship had twice enabled Woodmansee to study abroad, in Mexico and Morocco.

She spent a pre-Harvard gap year (funded by the Jack Kent Cooke Foundation) in Oaxaca, Mexico, refining her Spanish and learning a Zapotec language. There she was first exposed to maize agriculture. She is now finishing a joint thesis in integrative biology and social anthropology.

“I collected samples of maize grown by farmers in the town where I’m working, and I’m doing lab work on that,” Woodmansee said. “But the larger part of it is ethnographic work on seed-saving practices and value systems around local agriculture, and some analysis of how agriculture fits into the local economy of the town and how that’s changed.”

This year, to complete genetic analysis of samples she collected in Oaxaca, Woodmansee has been pursuing independent research in the Department of Organismic & Evolutionary Biology’s Davis Lab. (Independent lab study is “difficult, because I have to figure everything out for myself.”) In search of transgenic contamination, she is employing polymerase chain reaction — a technique used to make many copies of a specific target region of DNA — to look for two markers. “Preparing took several weeks of basically just grinding corn all day,” she said.

She was prepared for this by campus experiences that included the Radcliffe Research Partnership, through which undergraduates are paid to work side by side with Radcliffe Institute fellows, making for unique mentorships.

Woodmansee has assisted three fellows: For Elliott Colla RI ’16, a scholar of Arabic and Islamic studies at Georgetown University, she musically transcribed and analyzed protest chants; for Conevery Bolton Valencius, Ph.D. ’98, RI ’17, who writes and teaches U.S. environmental history at Boston College, she examined the impact of fracking on U.S. indigenous communities; and for Beth A. Simmons, A.M. ’87, Ph.D. ’91, RI ’19 — the 2018–19 Matina S. Horner Distinguished Visiting Professor at Radcliffe and the Andrea Mitchell University Professor of Law, Political Science and Business Ethics at the University of Pennsylvania — she helped compare different anthropological approaches to national borders.

“It’s been really great to get involved with research that’s not directly related to what I’m doing, but gives me the opportunity to get familiar with different approaches,” Woodmansee said of the program. “The work I did sophomore year with Conevery, coming up with methods for organizing notes, has been especially helpful with my thesis research.”

Somehow, Woodmansee still has time for music. When she’s not cycling from Pforzheimer House to the lab on Divinity Avenue, she can be found studying viola (which she took up a couple of years ago) through the music lesson subsidy program and playing in a string trio for “Music 189.” The group is coached by members of the Parker Quartet.

Woodmansee will return to Mexico for about five months this summer and fall. She has a strong community in Oaxaca, having met a number of kindred spirits. “I spend most of my time doing research, but I have a lot of other things that I go back for,” she said. In addition to visiting the friends she’s made, she loves to take her mountain bike on Oaxaca’s narrow dirt roads. Last summer, she took part in a 260-mile race from Oaxaca City to the coast, and this fall, she hopes to race 100 miles through the heavily wooded La Sierra Norte de Oaxaca.

Being such a creature of the outdoors, Woodmansee can begin to feel unsettled in the city. “I get used to it, but if I’m here for more than a few months at a time, I definitely need a break.” She’s already planning her next study abroad: “I think in Bhutan.”