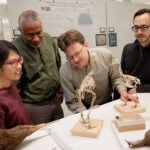 To work out his new lab’s paint scheme, Liau came up with a systematic — or, one could say, scientific — process. He left patches of various paint colors on the walls for days to assess the long-term impression they made. He eliminated options, selected his favorites, and opened the final decision to a lab-wide vote. Now, morning-glory blue blooms in the hallway, sunrise orange enlivens the tissue-culture room, and a soft spa green pops up wherever an accent is needed.

But within those sunny walls, Liau, an assistant professor of Chemistry and Chemical Biology, investigates a dark problem: how to beat cancer, in particular acute myeloid leukemia (AML), which the American Cancer Society predicts will kill 11,000 people in the U.S. in 2019.

Two out of three AML patients achieve remission with chemotherapy. To help patient No. 3, drug developers are trying a different tack. Since AML starts in the bone marrow when mutated genes fail to prevent blood cells from replicating again and again and growing into tumors, new drugs aim to reverse the mutation’s effects, reclaim hijacked cells, and halt growth. But these drugs don’t always work.

Using a new technique he calls CRISPR-suppressor scanning, Liau combines CRISPR scanning, a form of gene editing, with small-molecule profiling (a way to screen numerous drug molecules in one go) to investigate how current drugs fit into the nooks and crannies of the malfunctioning genes they target. He and his team systematically identify mutations in LSD1, a critical protein in AML, and in doing so expose details about the relationship between cells and the drugs used on them that may one day lead to faster, more targeted treatments not just for that third patient but for all cancer patients.

Designing a drug is far more complicated than designing a new lab space. But, just like blue can be periwinkle, sky, or sapphire, each drug molecule can have many variations. Developers tinker with these to see if slight alterations — a bump on this side, a hole on the other — make their treatments more or less effective.

“As chemists, we have the ability to make nearly anything,” Liau said. “Now, we have the unprecedented ability to systematically change protein structure directly in cells.”

Epigenetic changes occur when genes are switched on or off by environmental factors — often things like diet, exercise, and chemical exposure. But in the subtype of AML Liau and his colleagues looked at, mutated genes trigger epigenetic shifts, reprogramming blood cells to grow out of control. Enzymes often regulate the conversation between genes and the cells they supervise, but in this case these proteins malfunction.

Drug developers try to stop the excess growth this causes by impeding the malfunctioning proteins. But most researchers manipulate only one side — the attacking drug. Liau manipulated both drug and protein. LSD1 was his first target.

Proteins are like bicycles: They have both essential and nonessential parts, or domains. Without handlebars, for example, the machine can still move; but without wheels, it stops. So, Liau and his team searched for LSD1’s “wheels,” hoping to dismantle them, halting the protein malfunction and the disease.

The gene-editing tool CRISPR can make precise cuts in genetic code (DNA). Liau and his group used the tool to execute systematic but random slices across the LSD1 gene.

When the cell steps in to repair the cut, tiny scars can form in the genome. These scars produce various kinds of mutant genes, which then produce mutant proteins. One mutant loses handlebars, another pedals, and eventually, one loses its wheels. Even though the first two proteins lost some parts, their cancerous cells live on. But the last is immobilized, and growth shuts down.

With their systematic approach, the Liau team can classify which LSD1 weaknesses drug developers can exploit.

Still, some mutations can backfire and make proteins less susceptible to drugs. So, the Liau group also examines how each drug interacts with each mutant. Once again, some mutants die while others persist in malignant growth.

Liau’s group explored how bumps and holes affect how AML drugs target the mutated LSD1 protein, and they discovered something unexpected: One reason the drugs don’t always work is because they don’t work the way people originally thought. 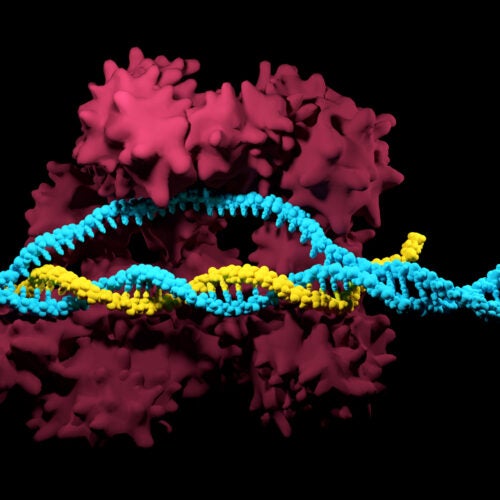 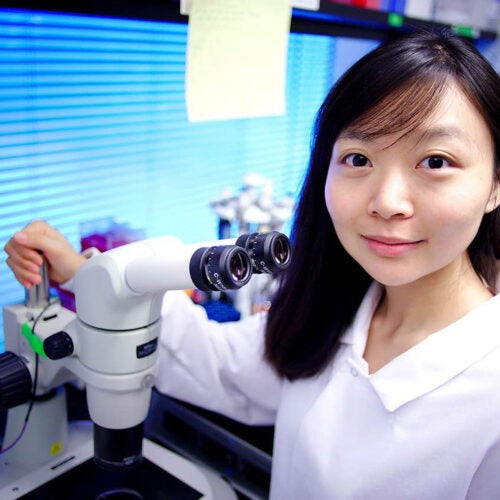 Drugs that target LSD1 shut down the protein’s enzymatic function. But they also cut off communication between the protein and the transcription factor GFI1B, an important player that helps control the epigenome, or the epigenetic state of the cells. Even though the drugs sometimes work because they sometimes disrupt both actions, the Liau group’s new technique showed that the LSD1-GFI1B relationship is most critical for AML survival. Armed with this new information, pharmaceutical companies can focus their work, hasten drug development, and produce more targeted treatment.

Next, Liau and his team plan to investigate more bumps and holes on LSD1, the protein’s darkest corners, and other cancer-relevant proteins. Before, according to Liau, “It wasn’t completely appreciated or understood why certain cancers were sensitive to LSD1 inhibitors.” Now, his technique could reveal new and more potent sensitivities, leading to more effective and efficient treatments for cancer.