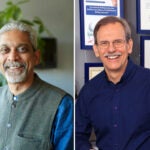 At a Meeting of the Faculty of Arts and Sciences on April 2, 2019, the following tribute to the life and service of the late Per Nykrog was placed upon the permanent records of the Faculty.

Born in Copenhagen, Denmark, Per Nykrog studied at the University of Copenhagen from 1945 to 1953.  After teaching at Aarhus University for 26 years, in 1979 Nykrog joined the Department of Romance Languages and Literatures where he specialized in medieval and modern studies until his retirement in 1998.  During his tenure, which included chairing the Department from 1986 to 1991, he brought to students and peers a vast and informed knowledge of the entire canon of French literature.  Ebullient and erudite in his teaching and writing, Nykrog has left enduring work in four very different areas.  First, in a groundbreaking dissertation, “Les Fabliaux: Étude d’histoire littéraire et stylistique médiévale” (1957, second edition 1973), a study of hundreds of facetious and often ribald tales in verse that appeared between the 13th and 14th century, he showed that the comic genre was not, as it had been thought, rooted in realism but in fact inverted the structure of the courtly romance.  Read aloud at dinner tables or firesides, riotous fabliaux — such as “Le Prêtre crucifié” (The crucified priest) — evinced a widening gap between grounded nobility, free to enjoy life and language, and the peasantry.

Second, “La Pensée de Balzac dans ‘La Comédie humaine’” (1965) challenged a critical industry devoted to biography or source studies of ninety tales, novels, and plays Balzac had published or written in the years 1829–1847.  Nykrog contended that under the title “La Comédie humaine” (The Human Comedy), painting “the portrait of an entire society,” Balzac’s vision oscillated “entre la toise du savant et le vertige du fou” (between the scientist’s yardstick and the madman’s giddiness).  The tension of reasoned observation and folly, he added, gave rise to human sciences and methods and modes of inquiry associated with structuralism.

Third, in a monograph published by Harvard in 1986, “L’Amour et la rose: Le Grand dessein de Jean de Meun,” Nykrog deconstructed “Le Roman de la rose,” a commanding and complex work scholars have often compared to the high gothic cathedral.  Composed of two parts, the first, comprising more than 4,000 lines and written in the courtly style by Guillaume de Lorris, gives way to Jean de Meun’s extension of almost 18,000 lines, a sprawling artistic rendition of love, a study of mores, and a cosmology of vastly different motivation. Written at the time of the repressive and — in Nykrog’s words — suffocating effects of Christian orthodoxy imposed by the omnipotent University of Paris in 1277, the second part associated nature and natural processes with God’s free will, which anticipated the joyous doctrine inscribed over the portal of François Rabelais’s Thélèmites’ abbey, “Fays ce que vouldras” (Do what thou wish).  This doctrine served as the topic of Nykrog’s decisive article on Gargantua, appearing in the Revue d’Histoire littéraire de la France, in which free will was shown affiliated with an Erasmian ethic of reform.

In “La Recherche du don perdu: Points de repère dans le roman de Marcel Proust” (1987), fourth, Nykrog studied how “À la recherche du temps perdu” (In Search of Lost Time) creates from the fin-de-siècle Paris a world of contradiction and paradox.  Using the concept of a dessein — a design, a sketch, a template — that shaped his study of Balzac, he showed how the work resembles a great psychogeography.  Similarly, in his last major study, “Chrétien de Troyes: Romancier discutable” (1996), Nykrog studied variations, inversions, and deviations in the narrative form of the author’s five courtly novels.  Sensing that Chrétien is much like a nouveau romancier, or “new novelist,” in freely entering the minds and thoughts of his character, manipulating points of view, and exploiting inner monologue and free indirect discourse, he argued that Chrétien is of contemporary mettle.

Few scholars in French studies during the last 50 years could claim to be of similar range or impact.  In 1965 Nykrog was named Knight of the Order of Dannebrog, and in 1992 the French government conferred upon him the title of Chevalier de l’ordre national du Mérite.  Admired for his wit, generosity, and unflagging love of literature, he guided the Department of Romance Languages and Literatures with a steadfast hand while directing many doctoral dissertations and being recognized as an outstanding teacher and a cutting-edge scholar.  Upon his retirement in 1999, he was honored by colleagues and students with a Festschrift titled “The World and Its Rival: Essays on Literary Imagination.” Nykrog is survived by his wife, Usha Nilsson; a son; three grandsons; and an extended family in India.