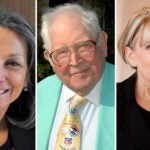 In recognition of extraordinary service

When Lenora Fuaga got called to the office at Highline High School in Burien, Wash., she was worried she was in trouble (she wasn’t). And when she found out the real reason, she thought it was a joke (it wasn’t).

In fact, Fuaga had been accepted into the Harvard Club of Seattle Crimson Achievement Program (CAP), a new initiative that provides mentorship and other resources to support a path to college for high-achieving, low-income high school students from western Washington (known as CAP scholars), starting in ninth grade.

“When I applied, I thought I wouldn’t get in,” said Fuaga, who is one of eight Highline ninth-graders in the initial cohort of CAP scholars. “So when they told me I got accepted, I was like, ‘Can you say that again?’ My dad was really proud because he’s always pushed me to have a better education than he did.”

As part of the program, the CAP scholars recently flew to Boston for a five-day spring break field trip to visit Harvard and MIT. Accompanied by two Highline staff chaperones, the students toured both campuses, learned about admissions and financial aid, sat in on classes, and met with first-generation Harvard and MIT students, as well as with their Harvard undergraduate mentors (known as CAP mentors). They also squeezed in excursions to the Freedom Trail, the Museum of Fine Arts, and Fenway Park, where they watched the Red Sox pull out a walk-off victory.

Reflecting on the group’s whirlwind visit, CAP scholar Saul Machuca summed it up in one word: adventurous.

Mauricio Majano, college and career access specialist at Highline Public Schools and one of the trip chaperones, was struck by the students’ energy when they were on campus, especially during the lectures they attended. “They were eager to go to the next lecture, even though it was optional,” he said.

Fuaga echoed this enthusiasm: “It was fun to see what an actual class would be like if you were to go to Harvard — how the professor works, how the students ask questions, how they take notes.”

Harvard Club of Seattle President Alexis Wheeler, J.D. ’09, said being able to experience classes and other elements of campus life firsthand gives the CAP scholars a “tactile connection” that they wouldn’t get just thinking about college in the abstract.

“I’m hoping they get a sense of the benefits and values of going to college, as well as a clearer understanding of how to get there,” she said. “That’s something I wish I had thought more about when I was young.”

Wheeler’s family fell on hard times when she was in high school in Bellevue, Wash., about 15 miles northeast of Highline. Inspired by her father, who was the youngest of seven and the first in his family to go to college, Wheeler saw academic achievement as a route to a life unconstrained by family circumstance. Her efforts earned her a full scholarship to the University of Washington, and, later, graduate degrees from Harvard Law School and the University of Westminster in London, but she acknowledges that she had it easier than some because she went to a well-resourced high school.

“If you’re at an elite private school or a magnet public school where going to a four-year college is the norm, then you can basically follow the current,” Wheeler said. “But if that’s not the norm, you’re often left looking on your own or vying for overstretched advising resources and support.”

Despite the tireless efforts of under-resourced school districts, this often translates to lower college attendance rates. Across the Highline district, for example, of the roughly 80 percent of students who graduate, about a third go on to a four-year college within a year.

Even among students who do attend college, studies have found that they are less likely than higher-income peers to apply to selective colleges, even though those institutions are often more affordable due to their generous financial aid programs. Many factors contribute to this trend, and Wheeler believes lack of awareness and lack of individualized support are prominent among them.

“In collaboration with district staff, we’re trying to make sure that students are as savvy about the process as possible, as early as possible,” she said.

Mentorship is an integral part of that mission. Throughout their week in Boston, the CAP scholars spent time with current Harvard College students who volunteered to serve as mentors. Outside of the trip, the Highline students receive ongoing guidance from both undergraduate and recent graduate mentors from Washington.

One of those mentors, CAP chair Michael Bervell ’19, said it’s vital for the CAP scholars to connect with people from similar backgrounds who went on to success in college and beyond, which shows them that it can be done.

“I see the purpose as twofold: One, to give the students the social capital to know who to talk to about all the questions they have about college; and two, to give them the social awareness of what it means to go to college and what that could look like for them,” he said.

For Bervell, whose parents both went to college in Ghana, that go-to person was his sister, Rachel, who graduated Harvard College in 2013. Now that he’s on the cusp of graduating himself, he’s proud to be able to serve as a role model to students from his home state, whether they end up at Harvard or another college.

“The power of being brave, being bold, and being willing to take risks if you want something to happen — that’s what I want my mentee and all the other CAP scholars to learn,” said Bervell, who will return to the Seattle area after graduation to start a job at Microsoft.

CAP scholar Christian Ramos Ochoa has taken a similar lesson from his experience in the program thus far. When he was considering applying, he assumed he wouldn’t be accepted, but he decided to try anyway, and it paid off. Months later, sitting in Annenberg Hall at the tail end of the group’s visit to Harvard, his advice to his fellow students back at Highline was simple: “Take advantage of your chances.” 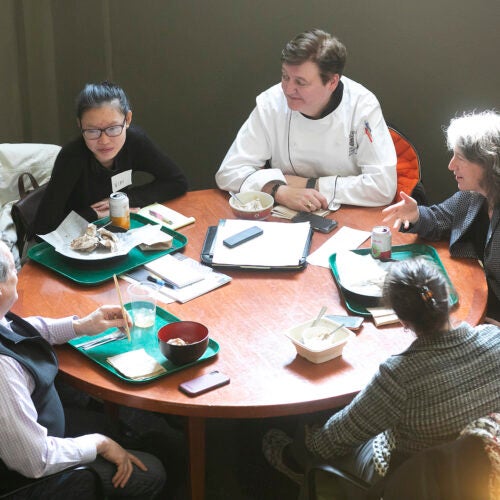