The flourishing of Genesis 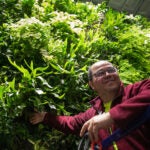 At Harvard, Genesis De Los Santos begins to give back in a big way

As the oldest of four siblings, Genesis De Los Santos learned early on that she had a responsibility that extended far beyond her Dominican American family in her Dorchester home.

The daughter of a custodian and a maid, De Los Santos ’19 was nurtured by her parents but also by her neighbors, teachers, and school counselors. It was a caring community of hardworking people who helped one another, shared joys and sorrows, and became her pillar during her formative years, she said.

“I realized early on that I carry not only the dreams of my parents, but also the hopes and dreams of people in Dorchester, and that of every family member in the Dominican Republic,” said De Los Santos on a recent morning at Eliot House.

“At times, it’s overwhelming, but when you grow up in a tight-knit community that is immigrant, low-income, and of color, there is a sense that you do things not only for yourself.”

When she arrived at Harvard nearly four years ago, De Los Santos struggled under the pressure of her own expectations, her lack of familiarity with college life — she was the first one in her family to go to college — and feelings of inadequacy and loneliness. It was only after she reached out and asked for help that she was able to build a group of friends and mentors who helped her turn around by sophomore year.

“I had a support system all my life, but I had to build another one when I came to Harvard,” she said.

Her Harvard community proved crucial when De Los Santos’ mother was diagnosed with breast cancer. When she was nearly exhausted by the stress of having to rush from classes to Dorchester to pick up her sister from school, take her to a neighbor’s house or to the hospital where their mother was undergoing chemotherapy, and rush back to campus, her friends were there to stand by her. “Having that support system during that time was incredibly important,” she said.

“There are so many people that helped me become who I am. Without them, I wouldn’t be the same Genesis.”

De Los Santos’ resilience was tested again when she was accepted to a study abroad program in Paris, one of her childhood dreams. She seriously considered staying, but her mother pressed her to pursue her dreams, and off she went.

To pay back her debt to the community that raised her, De Los Santos volunteered as an after-school tutor at the Franklin after-school enrichment program in Dorchester and the Harvard Undergraduate Minority Recruitment Program. She also joined the pan Latinx group on campus Fuerza Latina, the black theater troupe Black C.A.S.T., and the Association of Black Harvard Women to explore the different facets of her identity.

As a senior concentrating in history and literature with a focus on ethnic studies, De Los Santos wrote her thesis about hair in the Dominican Republic, which featured Dominican hair salons and their role as a “place of community” and “cultural creation.” Her adviser, Lecturer on History & Literature Rebecca Kennedy de Lorenzini, said that one important contribution of the thesis is “the way in which her analysis accounts for more complex, diverse understandings of racialized identity in the Americas.”

On the day she turned it in, she made a copy for her mother and gave it to her on the Widener Library steps. “It was a beautiful moment,” recalled De Los Santos. “I wanted to honor my mother because she instilled in me the desire to go to college and go after my dreams.”

At Harvard, De Los Santos discovered a passion for performance and theater. As a freshman, she took part in “Black Magic,” a play written by Kimiko Matsuda-Lawrence ’16 about how black students experience Harvard. In her senior year, De Los Santos performed in Ntozake Shange’s acclaimed play “For Colored Girls Who Have Considered Suicide/When the Rainbow is Enuf.” The plays are perfect bookends for her years at Harvard.

After graduation, De Los Santos will travel to France, Senegal, the Dominican Republic, and Haiti to study storytelling as performance art. She’s excited about the trips and excited about her future, but always grateful to the people that cared along the way.

“There are so many people that helped me become who I am,” she said. “Without them, I wouldn’t be the same Genesis.”