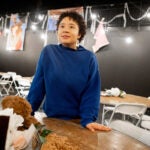 The flourishing of Genesis

In what Assistant Dean Chris Ciotti called “a comfortable and safe place for an uncomfortable conversation,” scores of Harvard faculty and administrators gathered Thursday morning to discuss racism, sexism, LGBTQ rights, politics, white privilege, and economic equity as part of the FAS Diversity Conference “A Decade of Dialogue.”

And while one speaker said that “the world needs Harvard to become a leader” in fostering an inclusive environment, keynote speaker Tim Wise noted that institutions everywhere are increasingly examining whether they foster or impede climates of belonging — because, he said, since the 2016 elections, “the deep divisions that were always there [in American society] are more apparent.”

“What does it mean when conservatism in the modern era is not just, ‘I would like my taxes to be lower and businesses to have some deregulation,’ it’s actually a debate about the fundamental humanity of certain people and whether or not they’re going to enjoy equal rights?” he said. “We’re at that point right now.”

Wise, an educator, author, and anti-racism activist, said the societal divisions that are often expressed in racial or other bias are rooted in both white privilege and a failure to understand that the system is rigged against most people by “rich white men telling not-rich white people that their enemies are black and brown.”

“That is page one in the playbook,” he said.

To illustrate his point, Wise pointed to “Minnesota Nice”: A version of the Golden Rule that three liberal college students told him during a visit there in the ’90s explained why they had no racism on their campus.

“I thought, now, that is weird. First, because I’m an antiracism educator, so why would you bring me here? It seems like a waste of my time and your money, because I most assuredly am cashing your check,” he said.

“Second, I always find it odd when white people tell me there’s no racism anywhere. I’ve been white a long time. It’s like when men tell me there’s no patriarchy and no sexism; I’m inclined to check with women. So I started asking black folks and Latinx and Asian and indigenous people and they all went, ‘Oh, God,’ with the kind of eye roll you can actually hear, and they all said, ‘Minnesota Nice is killing us.’”

“Minnesota Nice,” it turned it out, was a quiet cover for sustaining the status quo. If the marginalized minority groups wanted to question it they had to raise their voices, “and then they got tagged as Not Nice,” Wise said.

What diversity meant to the young Minnesotans, Wise said, “was, ‘Y’all can come be part of our thing, but don’t you dare forget that it’s our thing. You can come and you can dance, but we pick the music.’”

Wise said that changing an unjust status quo cannot be left to moral suasion (“White folks have never given an inch because they realized they’d been wrong”) but to advocacy and interest convergence — Derrick Bell’s theory that white people support racial equity only when it benefits them, such as when Lincoln signed the Emancipation Proclamation to save the union, or the Civil Rights advances of the 1960s that let America claim to be land of the free while it promoted capitalism against communism.

“Think about some of the things that have changed since ’01. ‘Don’t ask, don’t tell’ was still policy. You had presidential candidates who wouldn’t have dreamt of talking about marriage equality. We weren’t talking about transphobia. How did that happen in 17 years?” he said. “Because of the work of advocates throughout society pushing to change the narrative.”

To effect change, he said, “We have to have that moment of interest convergence where we go to the dominant group and say, ‘We get that you’re scared, but it’s more frightening to see the division in this country because we haven’t learned to share.’

“If you think that division is painful now, stick around and don’t do anything about it, and then see where we are in 15 or 20 years. This is self help.”

“People who traditionally had power, were accustomed to power, are now facing a world that has changed. Some of what we’re seeing is the grasping of power,” she said. “We’re going to have to make a decision about what we’re willing to do, individually or collectively, to shake that.”

“It requires real change,” said Sandra Upton, vice president of educational initiatives for the training and consulting company Cultural Intelligence Center. “Creating a diverse and inclusive environment requires commitment. It requires work. It requires a willingness to give up something. That’s the real challenge about why inclusion is so difficult.”

Stephanie Huckel, senior global program manager for diversity and inclusion at the gaming company IGT, said managers can foster inclusion through respectful, one-on-one engagement, while Fosberg said that intergroup contact that lets individuals share their stories adds to a sense of belonging.

“I think we often let ourselves off the hook by saying belonging is difficult to measure,” said Manswell. “What about if instead we looked for a ‘Stop Do’ list? Look for tangible evidence of things that make people feel they don’t belong, and get rid of them.”

Author and activist Michael Fosberg said that it can be especially hard to discuss differences when it comes to gender and sexual identity. “There isn’t one way to have a conversation about this,” he said. “We need to get comfortable being uncomfortable.”

Manswell said it is hardest to foster inclusion and acceptance of significant political differences. “I’m still struggling with this particular one,” she said. “The biggest a-ha I had for why this has become so difficult is that is we used to look at political differences and they were grounded in economic policies and ways of doing things. [Now] the conversation we’re having as if it were a political conversation is actually a humanity conversation. Humanity has gotten enmeshed in politics.”

“We really are talking about all of us,” said Huckel. “How do we draw people into the conversation? By reminding them we’re also talking about you. We’re not talking about ‘the other.’ The personal is political and the political is personal. Political decisions have very real ramifications on our lives.”

The seminar also included an appearance by Nina Livingstone, a journalist and public speaker who lost her sight and hearing in 2000. Livingstone talked about occasional public misunderstandings when her senses were still failing — drawing a crowd at Bloomingdale’s with a long conversation with a fashionable woman who turned out to be a mannequin; having a bank clerk, asked to repeat herself, tell her loudly and clearly, “You have $12.15 in your account. Do you want to withdraw?” — as well as episodes of empathy, such as the man who approached as she walked through Harvard Square with her mobility cane to ask if she was able to see anything at all.

“He asked about my condition [Usher syndrome], and I told him, and it turned out he’d heard of it. He was a student at Harvard Medical School,” she said. “I loved this. I felt like I was included somehow. And I don’t want to be ignored.”

The conference was offered in partnership through the FAS Dean’s Office, FAS Human Resources, and the FAS Office of Diversity Relations and Communications. To view the conference video, click here. 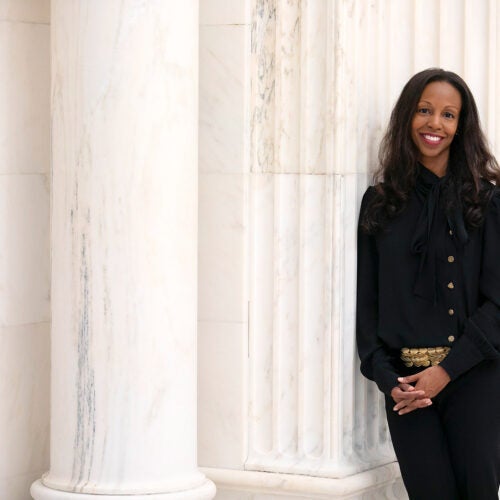 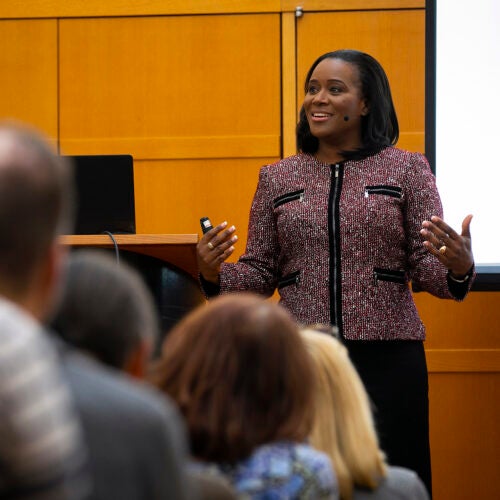