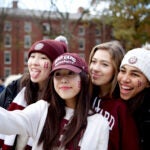 Playing The Game, both past and present

“Not talking about race actually increases the sense of bias somebody already has … studies show that ignoring race can exacerbate rather than alleviate issues of race in the workplace,” said Allison Manswell, author of “Listen In: Crucial Conversations on Race in the Workplace.”

Manswell, a certified professional in learning and performance (CPLP), delivered her remarks at the Faculty of Arts and Sciences Diversity Dialogue titled “Silence Is a Statement: Understanding Race in the Workplace” on Nov. 15.

Race must be discussed — if only to diversify the workforce — particularly at a place such as Harvard, she said. “When you don’t talk about it, you don’t have a frame of reference. You just know what you see on television.

“Because of who you are, you have the responsibility to be the leaders, not just in academia, but in the thought world and in the nation — for doing this right,” Manswell said. “The learning has to come from diverse perspectives in order to maintain its value in academia … The next generation of students is demanding it. They are impatient: racism, misogyny, and those kinds of things — they are not having it!”

Despite the advantages of talking about race, some people still find it uncomfortable, she said. “Some don’t think they have the vocabulary to talk about race or deny that it is an issue.

“Then, there are those who claim they don’t see color. That is antiquated,” she said. “We are past the point where colorblindness is an option.”

Manswell offered three ground rules, or premises, to start the conversation about race at work.

“Acknowledge the degree of discomfort and accept that we have to move through it in order for us to make any progress,” which is where the bigger challenge lies, she said. Finally, “remain committed to the greater good even when — and especially when — it is personally difficult for you.”

Manswell implored the audience of approximately 100 people in the Harvard Hillel Center to not take anything personally, and to engage with others with compassion.

“Use the many resources at Harvard to better understand the issue,” she said. “Build relationships with people who are different than you, expand your universe. … Have real conversations with people. Trust that conversations matter, and that dialogue is a powerful force forward for change. Trust that that is actually true,” she concluded.

“The Diversity Dialogue’s session was powerful and productive. [Discussing race in the workplace] has been on our minds at the Office for the Arts and I feel certain it will create additional dialogues that we will have internally,” said Alicia Anstead, associate director for programming in the Office for the Arts.

According to Andrea Kelton-Harris, FAS senior human resources consultant, the dialogue was a fitting follow-up to an FAS panel discussion, “The Importance of Inclusive Spaces and Symbolism in the Workplace,” held this past August.

Kelton-Harris also announced that a diversity conference will be held in April to celebrate the 10th anniversary of FAS Diversity Dialogues.