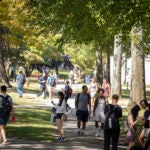 Harvard’s pulse on inclusion and belonging

At a Meeting of the Faculty of Arts and Sciences on March 5, 2019, the following tribute to the life and service of the late Pramod Chandra was placed upon the permanent records of the Faculty.

Professor Pramod Chandra was born on Nov. 2, 1930, in Varanasi, India. His father, Dr. Moti Chandra, was a connoisseur, museum curator, and renowned Indologist, so exposure to the world of art and culture came along with his upbringing. After his parents moved to Mumbai, Chandra attended Elphinstone College (1946–1948). He subsequently earned a B.S. degree in 1951 at Georgetown University’s School of Foreign Service. But government service was not his métier. Returning to Mumbai, he secured a position in the Department of Art and Archaeology in the Prince of Wales Museum, and his Ph.D. was granted from the University of Bombay in 1964. He then was appointed to the University of Chicago, becoming a full professor in 1971 and remaining there until 1980, at which time he was appointed George P. Bickford Professor of Indian and South Asian Art at Harvard, from which chair he retired in 2004.

His awards and achievements include an NEH grant (1976–1980) and the distinguished Bharat Kala Bhavan Award from Banaras Hindu University. Between 1960 and 2003, he organized seven major exhibitions in India and the U.S., including “The Origins of Mughal Painting” (1976), “Indian Terracotta Sculpture” (1977), and “Meeting of Traditions in Indian Painting” (2003). He was further designated guest curator for the exhibition “The Sculpture of India” at the National Gallery of Art, Washington, D.C., during the Festival of India in 1985. In the accompanying catalogue, he provided a synoptic survey of the aesthetic sensibility, spiritual dimension, technical accomplishment, and artistic excellence of various styles, schools, and idioms of Indian work from 3000 B.C. to 1300 A.D. Thanks to him, the James Rubin collection of Indian classical music was given to the Harvard Department of Music. In 2015, he was named an honorary fellow of the Asiatic Society of Mumbai.

Chandra was a founding member of the American Committee for the History of South Asian Art (now the American Council for Southern Asian Art [ACSAA]) and its first President (1965–1972). He founded the American Academy of Benares in 1965, which continues to this day as the Center for Art and Archaeology at the American Institute of Indian Studies (AIIS). Thanks to the initial boost given by Chandra and his team, the AIIS has the most complete archive of monuments and antiquities in the country and has produced the seminal volumes of the Encyclopedia of Indian Temple Architecture.

Chandra never lost his profound attachment to the country of his birth and the living traditions of his culture. He was a life member of the Indian National Trust for Art and Cultural Heritage (INTACH) and an advisor to the state government of Madhya Pradesh. He was also appointed to the Indo-U.S. Subcommission on Education and Culture. In India, he guided field explorations and excavations, while rendering valuable advice to national art institutions such as the Indira Gandhi National Centre for the Arts (IGNCA), the National Museum, and the Lalit Kala Akademi in Delhi.

Chandra wrote with authority on painting, sculpture, and architecture, with a special focus on Mughal painting and Gupta art overall. As a teacher, he was at ease in the full spectrum of South Asian visual arts, philosophy, and literature. He had profound knowledge of Indian classical music and was equally well-schooled in the Western intellectual tradition. In his Polsky Lectures, published as “On the Study of Indian Art” (1983), Chandra provided a masterly overview of historical scholarship on Indian art. He paid tribute to the pioneers in the field while pointing out errors of fact and of method in contemporary thinking. He encouraged scholars to re-examine their methods and assumptions, espousing the connection of art history to other disciplines. His good eye and mind consistently looked into problems related to the disciplinary tools of the history of art: classification in iconography and iconology, the relevance of style, and the meaning of form, along with the historical connections between artists and patrons.

In the volume “Studies in Indian Temple Architecture” (1975), which he edited, he emphasized the need to read Indian architectural forms through a study of texts and vocabulary together with the help of traditional architects and to go beyond a study of motifs, to epigraphic and archaeological evidence external to the architecture, showing the blending of the sensual and the spiritual, the abstract and the concrete in this art.

Finally, Chandra produced significant work on the tradition of illustrated manuscripts in Indian art, especially Rajput and Mughal miniature painting. Throughout, he regularly emphasized the need for conservation in both miniature and wall-painting traditions, insisting upon the knowledge of local languages and scripts relevant for locating the theme, date, and provenance of works.

In lectures, Chandra incited students and audiences to look closely at objects and their location in the overall scheme of art. He stressed the importance of considering local ethnographic and oral traditions as supplements to the reading of exegetical texts. For him, the style of a given work or architectural construct was rooted in an understanding of the blend of form and meaning specific to each community, culture, and nation.

For his students, Chandra was a master of one-on-one dialogues, in which he would take them far afield into the intellectual and cultural history, philosophy, and religion that served to place Indian art in its original context. He was a great raconteur of tales, full of humor, possessed of an irreverence for power or office, and quite free of self-promotion. Among these students, he inspired deep loyalty, enjoying lasting relationships throughout their careers and thus perpetuating his legacy in universities and museums around the world today.

At the time of his death, on Feb. 19, 2016, Pramod Chandra was actively working on the cataloguing and digitization of his textual, visual, and musical archives in Cambridge. For those who benefited from his guidance, knowledge, and pedagogy, he remains an exemplar of the most exacting standards in the scholarship of Indian art history. He leaves behind his wife, Mary Carmen Lynn, and son, Sasanka.