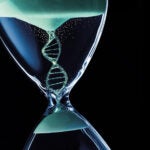 Experts gathered at the Harvard T.H. Chan School of Public Health Friday laid out the extent of the challenge: with just 7.5 billion people today, some 800 million are underfed, 2 billion eat an unhealthy diet that puts them at higher risk for obesity, diabetes, and other metabolic diseases, and many of the rest eat diets dependent upon an inefficient and unsustainable food production system whose reform will be essential in feeding another 2.5 billion mouths.

Though panelists appearing at The Forum at the Harvard T.H. Chan School of Public Health said the necessary changes, while challenging, are achievable, one of the lowest-hanging fruits has the potential to make a large difference.

A large percentage of the food produced today is lost as waste, and a variety of approaches could make that food available for consumption, according to Gina McCarthy, professor of the practice of public health, former administrator of the U.S. Environmental Protection Agency, and head of the Chan School’s Center for Climate, Health and the Global Environment.

McCarthy said locating farms closer to where food is purchased will reduce the amount of food lost before it reaches store shelves. Better refrigeration, already being developed, is another strategy to cutting waste in the distribution system. Awareness among consumers is also key, she said, and simple steps can be taken to reduce food waste in cafeterias — don’t use large serving trays that encourage people to take more than they will eat — and in the home, where she counseled to first “shop your own fridge.”

While fighting food waste is a step that can help anywhere, the current food production system is complex and diverse, and will require a variety of approaches to become more efficient, panelists said.

Technology may provide one answer, according to David Bennell, manager of food, land, and water for the World Business Council for Sustainable Development, a corporate-led organization seeking sustainable business solutions.

The organization, Bennell said, has developed weather forecasting technology —  being piloted in the West African nations of Ghana and the Ivory Coast — that can send weather data to the phones of small farmers in the developing world. Armed with that knowledge, farmers can better plan planting and harvesting to boost agricultural yields. In addition to information, though, such small farms will also benefit from fertilizer, according to Professor of Epidemiology and Nutrition Walter Willett.

“We waste 40 percent of the food between the farm and the table, and then we have to think about how we get people engaged in this. We want them to demand healthy food, but we also want them to have a rich sense of where their food comes from.”
— Gina McCarthy

“Many people around the world carry mobile phones,” Bennell said. “The idea is: Could we create a mechanism through the mobile phone network that would enable these farmers to make better predictions about weather.”

Improving yields on small farms in the developing world would put additional food where it is needed most. Bennell said that the people suffering the largest food insecurity today are, ironically, the world’s farmers — about 2 billion people live on the developing world’s 475 million farms, according to the U.N. Food and Agriculture Organization — and on those farms women and children are most affected. Another technology-centered strategy, Bennell said, is a plan by Microsoft to use drones and artificial intelligence to survey farmers’ fields from the air and provide data on whether they’re too wet, too dry, or showing signs of insect infestation. Getting that information early will allow farmers to address imbalances before they become problems.

Eating habits are going to have to change, according to Willett, who was part of a commission convened by the scientific journal The Lancet that examined how best to feed 10 billion people.

The commission developed a model diet with the goal of being able to provide healthy food in an environmentally sustainable manner.

The diet proposes eating more fish and plant-based foods — fruits, vegetables, nuts, and legumes — than many in the developed world eat today, Willett said. It would also mean eating far less red meat than is common on many tables — the equivalent of just one hamburger a week or a large steak monthly.

One problem with red meat, Willett said, is that the ratio of grain fed to a cow to get a serving of beef is equal to 20 servings if the grain is eaten directly. In a world struggling for enough to eat, that’s inefficient.

“[The cow] is a huge emitter of greenhouse gases, for all the time it’s living and breathing,” Willett said. “Plus, feeding grain to cattle, in particular, is hugely inefficient — roughly a 20:1 conversion of what we feed cattle to convert it to edible food to humans. [It’s] massively inefficient.”

The “new” diet, Willett said, is actually not that different from the traditional Mediterranean diet as it existed before the advent of modern agricultural practices. Meat was eaten, but sparingly, and rarely as the centerpiece of the meal.

That diet, Willet said, would not just feed a lot of people, but it would also improve health globally, eliminating between 20 percent and a quarter of 11 million diet-related premature deaths annually.

“The good news is it is possible to feed them a sustainable and healthy diet,” Willett said, “but it will require a big change in what we’re doing.”

In response to a question from the audience, Willett said some cultures have long eaten insects and, though dietary studies including insects are rare, researchers should explore whether they deserve a larger role in the future . 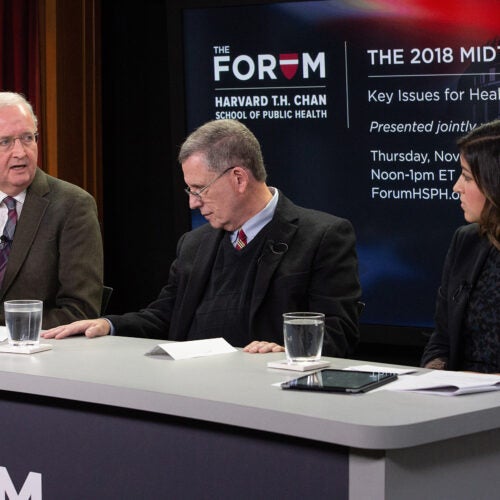 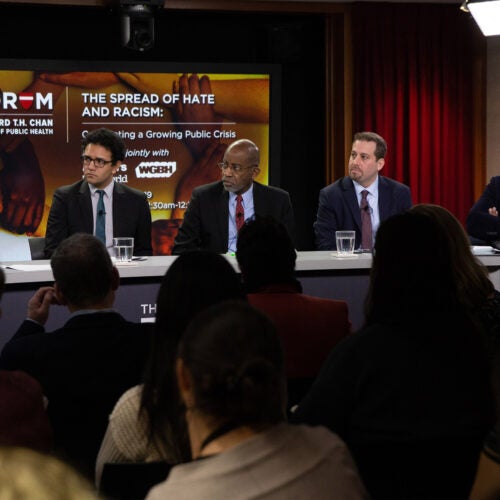 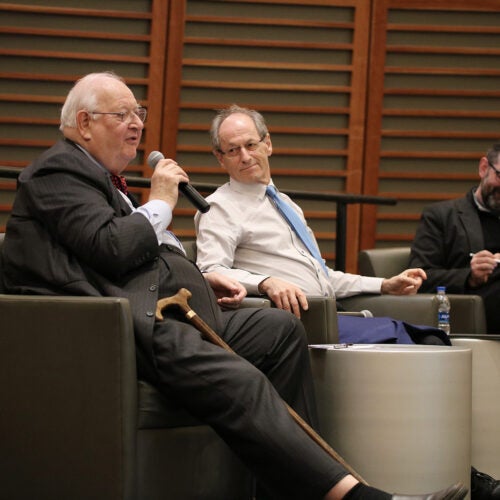 Ana Sortun, chef and owner of the Cambridge, Mass., restaurant Oleana and also a panelist, said that a healthful, plant-based diet can be not just sustainable, but also tasty. Cooks, Sortun said, can avoid the “cheap tricks” common in modern processed foods — boosting flavor with fat, salt, and sugar — and still turn out flavorful meals. One key, she said, is to emphasize locally sourced foods, because the fresher the ingredients, the better the flavor.

Sortun told of a recent trip around the Mediterranean and her exposure to an array of new flavors in Turkey, created not through those fat-salt-sugar tricks, but through careful cooking with chosen spices.

Several panelists pointed to the U.S. Farm Bill as a potential political tool to encourage change in the U.S. industrial agriculture model, which relies heavily on pesticides and fertilizers, the runoff from which chokes waterways. The bill’s incentives, which could be altered, now encourage centralization of agriculture to the detriment of surviving small and medium-sized farms, Willett said. Changing the farm bill, however, would be difficult since the food and agriculture industry is a powerful lobby.

Despite the challenges ahead, McCarthy said that people can be educated and support change with the choices they make every day, reducing waste and building an agricultural system that doesn’t harm the environment.

“I have no doubt we can do it. The question is how to engage enough people … to ensure this is what we deliver to the world,” McCarthy said.