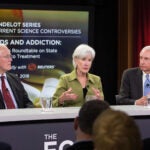 For a growing segment of the world’s population, economic inequality has become deadly. That was the message of Nobel Prize-winning economist Angus Deaton and University College London epidemiologist Michael Marmot at the Harvard T.H. Chan School of Public Health colloquium “Nations at Risk: The Changing Distributions of Population Health” on Friday.

The event was co-sponsored by the Harvard Center for Population and Development Studies and Harvard Chan School’s PhD in Population Health Sciences program.

Following introductory remarks by Harvard Chan School Dean Michelle Williams, the first hour of discussion outlined the extent of the problem. Deaton, a professor emeritus at Princeton University’s Woodrow Wilson School who was awarded the Nobel Memorial Prize in Economic Sciences in 2015, pinpointed a rise in “deaths of despair” — his term for preventable death by suicide, alcoholism-related liver disease, or addiction. All three are rising among uneducated white males in the U.S. This points to a larger crisis, Deaton said: “American capitalism is simply not working for the working class anymore.”

There are two Americas, he added, and the great dividing line appears to be a college education. Deaton cited numerous studies showing the effects of the education gap: “Deaths of despair” account for 50 of 100,000 deaths in white males with a bachelor’s degree, but 200 per 100,000 in those without. Meanwhile, median wages have risen for college grads, but dropped for those without degrees.

“I am not suggesting that everybody get a B.A., but this divide comes up over and over again,” he said.

Deaton said the divide is no accident, and cited policy decisions and a range of related factors, including the decline of the labor movement and the measures multinational corporations have pushed to undermine it — notably, company-favoring arbitration and noncompete clauses.

It is also no accident, he said, that in rankings of rich nations, life expectancy in the U.S. is among the lowest.

“The U.S. spends 18 percent of its GDP on healthcare,” he said. “That’s $8,000 per family, and you can do a lot with that. But a lot of that is being siphoned off to hospitals, device manufacturers, and pharmaceutical companies.”

In a presentation focused on solutions, Marmot began by citing “Social Injustice is Killing on a Grand Scale,” a report that he wrote for the World Health Organization’s Commission on Social Determinants of Health. He agreed with Deaton’s theory of an education-based health gap, adding that women without educations are more likely to experience spousal violence.

“Inequality as a social gradient is the key to global health,” he said. “What’s at the heart of this whole exercise is creating fairer societies.”

Governments can level the playing field, he said, by providing educational opportunities across the board and making employment for all a priority. Marmot looked at cases in which governments have taken these steps — notably Great Britain, where a new Labour government came into power in 1997 and spent the next several years shifting national policies.

“At this time the gap between the poorest and the average decreased,” he said. “Inequality increased again when the new government came in 2010, but it got smaller when the government had a consistent policy to make it smaller.”

He gave a specific example of success: In the lower-class East London suburb of Hackney, the educational development of poorer children is well within the national average — far higher than it is in the upper-class city of Bath, where poorer children are often left behind.

He proposed that governments worldwide invest in preschool programs — which he said have been shown to increase later test scores — and called for the U.S. to adopt a tax structure with more benefit to the lower 95 percent. He also suggested a crackdown on tax havens for multinationals, which amount to 5 percent of the world’s gross domestic product.

Marmot closed his talk in a defiantly optimistic spirit. “There are a lot of bad things happening in the world, but we have to believe that right, temporarily defeated, will be stronger than evil triumphant.”

Though he said that some accuse him of living in a fantasy, he said, “Come and join me in my fantasy land, and let’s dream of a fairer world.”