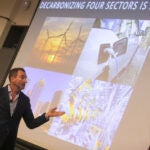 For more than a decade, scientists have worked to understand the connection between colibactin, a compound produced by certain strains of E. coli, and colorectal cancer, but have been hampered by their inability to isolate the compound.

So Emily Balskus decided to focus instead on the mess it leaves behind.

Balskus, a professor of chemistry and chemical biology, and her colleagues are the authors of a new study that seeks to understand how colibactin causes cancer by precisely identifying how the chemical reacts with DNA to create DNA adducts. The study is described in a Feb. 15 paper published in Science.

“It’s been known since 2006 that there’s a set of genes in certain gut-commensal bacteria — mostly in strains of E. coli — that gives them the ability to make molecules that can lead to DNA damage,” Balskus said. “Over the years, there have been a number of studies that have shown a correlation between the abundance of bacteria carrying this pathway and cancer in humans, and multiple mouse models of colitis-associated colorectal cancer have demonstrated that this specific set of genes … can effect tumor progression and invasiveness.”

But researchers have been in the dark about how it works.

“My lab started studying this because we were interested in this problem of how you can understand a molecule you can’t isolate,” Balskus said. “And the summary of our earlier work to understand colibactin was that, unexpectedly, we and other groups who worked on this pathway found that this natural product has what’s called a cyclopropane ring in it.”

It’s that chemical structure that Balskus and her colleagues believe forms the colibactin “warhead” — in part because similar structures are found in other, unrelated molecules capable of causing direct DNA damage by reacting with it.

“When we realized that, we hypothesized that a direct interaction with DNA may be important for colibactin’s genotoxic activity,” Balskus said. “That illuminated a new strategy for getting information about colibactin’s structure: Instead of trying to isolate the molecule itself, we could isolate and characterize the DNA adducts, or the products of the reaction with DNA.”

Isolating those DNA adducts, however, is no easy feat.

To do it, Balskus and her team turned to Silvia Balbo, a professor at the University of Minnesota School of Public Health, who developed a novel technique to identify DNA adducts based on how they fragment in a high-resolution mass spectrometer.

“What we did, which I thought was a very exciting experiment, was to take a strain of E. coli that could produce colibactin and a mutant strain with the same genotype, except it didn’t have the gene cluster that makes colibactin,” Balskus said. “We incubated those strains with human cell lines … and isolated the DNA from both sets of cells, put it in the mass spectrometer and compared the abundance of different DNA adducts in the samples. So we were able to find DNA adducts that were only generated in the cells that were treated with the genotoxin-producing bacteria.”

Armed with that information, Balskus said, her team’s next challenge was to understand the chemical structure of those adducts.

“It looked like they came from colibactin based on the fragmentation in the mass spectrometer,” Balskus said, “but that’s not enough to solve a chemical structure. What researchers in my lab did — and it was a heroic effort — was to chemically synthesize a standard. Then we compared it to the adducts produced in the cells, and they were the same.”

To demonstrate that the process was also at work in living animals, the team collaborated with Wendy Garrett at the Harvard T.H. Chan School of Public Health, to conduct an experiment in which germ-free mice were colonized with strains of E. coli that could and couldn’t produce colibactin.

“We showed that we were able to detect these same DNA adducts in the colonic epithelial tissue of the mice with the colibactin-producing strains,” Balskus said. “That tells us that all the chemistry that we and others have been doing ex vivo really might be relevant for what’s going on in vivo.”

Going forward, Balskus hopes to investigate whether those same adducts can be detected in samples from patients, and to understand the specific types of DNA damage caused by colibactin and whether they influence cancer development.

And now that the researchers have a good understanding of the chemical structure of the DNA adducts created by colibactin, Balskus said, they may be able to work backward toward the molecule itself.

“The adducts we identified are most likely coming from decomposition of a larger species,” she said. “So we’re still trying to solve this chemical mystery and working toward figuring out what the full structure might be.”

The findings also suggest that DNA adducts could be used as a key biomarker for the activity of compounds like colibactin and other potential carcinogens derived from the activity of gut microbes.

“Up until this point, when people were looking for organisms with the ability to make these DNA-damaging compounds, they were looking for the biosynthetic genes. That tells you about the genetic potential, but it doesn’t tell you that DNA damage has actually occurred,” Balskus said. “And we know from other areas of toxicology that if you have good biomarkers for predicting carcinogenesis, that can be powerful when thinking about assessing cancer risks.

“It’s still very early,” she continued, “but that is one area where our work could potentially lead. It’s still too early to know if colibactin plays a causal role in tumor development in humans, but we would like to have better ways of monitoring colon cancer susceptibility.” 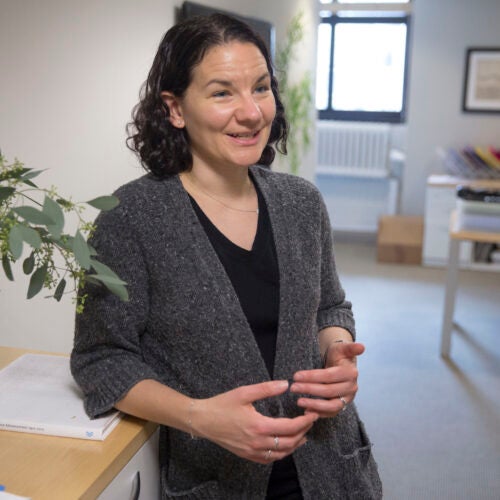