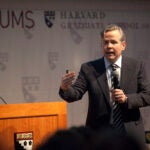 On one of his first trips as president of Harvard, Larry Bacow traveled to Washington, D.C., in July 2018, and there signaled that he would be a steadfast advocate for higher education.

On Thursday, Bacow was back in the nation’s capital, reaffirming his support for colleges and universities and his belief that they can help change the world, despite fears that Americans are increasingly questioning the value of a college degree.

During a panel discussion with higher education experts co-sponsored by the American Enterprise Institute and the Brookings Institution, Bacow said he was optimistic that higher education can respond and adapt to pressures and changing priorities of the 21st century and continue to offer students a critical pathway to success.

“The death of American higher education as we know it has been grossly overpredicted, and consistently so,” said Bacow. “Historically, the nation’s colleges and universities have enabled the American Dream, and it’s important that all of us work to continue to ensure that opportunity exists for future generations.”

But Harvard’s 29th president was also frank about the challenges facing colleges and universities today, and in the years ahead. Rising tuition costs and the perception that institutions of higher learning across the country are elitist and neglect to embrace a wide range of viewpoints have contributed to waning public confidence, he said. “We ignore these criticisms at our peril and ultimately, I think we need to engage and respond and address these in important ways.”

One of the many ways Harvard has responded to critics is by continuing its efforts to recruit a diverse student body and providing a financial aid package that ensures a four-year college degree is affordable to students from any economic background.

“We are truly need-blind,” said Bacow. “When we admit kids, we don’t look to see whether or not they can afford to come. Any student who enrolls at Harvard and who comes from a family with less than $65,000 a year in income, that family contributes nothing to their education.”

While in Washington, Bacow also met with politicians on both sides of the aisle, including Republican Senators Mitt Romney, Lamar Alexander, and Roy Blunt, Democratic Rep. Jim McGovern, and Kelvin Droegemeier, the new director of the White House Office of Science and Technology Policy, to discuss Harvard’s priorities, among them immigration, the taxing of university endowments, and the importance of student aid and of federal research funding.

At the Thursday talk, Bacow said public funding of higher education is critical. He told his listeners that as other countries are “investing more public money in their research university systems, seeking to become more like us, we, in many cases, have been disinvesting.”

Panelist Anthony Carnevale, director of the Georgetown University Center on Education and the Workforce, said change would require more transparency and innovation at the program level. Instead of creating a new college or university that would cost billions, educators should be thinking about more focused programs that can be created for much less, he said. “And so long as the program delivers learning and earning, it should be available for public funding, in my judgment.”

In addressing the notion of a nontraditional education, Michelle Weise, senior vice president of Strada Education Network, said there needs to be more effort to “really invest in the concept of lifelong learners” and a move to better explore ways to help teach, train, and educate more of the 32 million working-class Americans for whom a two- or four-year degree is “not an option.”

“There are new, innovative models that we are looking to that are on-ramps to good jobs,” said Weise.

At Harvard and other institutions of higher learning, said Bacow, expanding the concept of online learning is one potential way forward.

“As we think about the impact of online learning and digital education, we all recognize that we’ve had basically 1,000 years to perfect what we are doing right now, the sage on the stage, putting a teacher in front of a whole bunch of students and having them convey knowledge to them. We have been at the digital learning for an incredibly brief amount of time. What we know is it will get better over time. We will figure out how to teach different subjects using the technology … I am optimistic at our capacity to reimagine the way in which we deliver education more broadly.”

Ensuring that access to and success in college are one in the same is a key part of the future success of higher education more broadly, said Sandy Baum, a fellow at the Urban Institute. Focusing on how to help struggling students graduate from high school, ensuring high school graduates are prepared for college, and providing students with the kind of supports that will help them to succeed once there are all parts of the solution moving forward, she said.

“We have to think holistically about the solutions,” said Baum, “what institutions like Harvard and other institutions with resources can do to help us solve these problems, and what we can all do and how we should think of higher education as a broader and more integrated social institution.”

In today’s high-tech world, many have increasingly pushed back on the value of the liberal arts education. But the liberal arts can teach students important skills, said Weise, including ethics, judgment, and values.

An important part of the liberal arts framework has traditionally included picking a scholarly focus. Asked whether students should still pursue majors in college, Bacow said he firmly believes in encouraging a focus on one particular field of study.

“I think that there is virtue in having students do depth in something, because it’s important to understand issues and subjects at a level of complexity so that you actually appreciate your own ignorance when it comes to other fields, and not just have a superficial understanding of everything,” he said. “So, I am in favor of students concentrating, as we say at Harvard.” 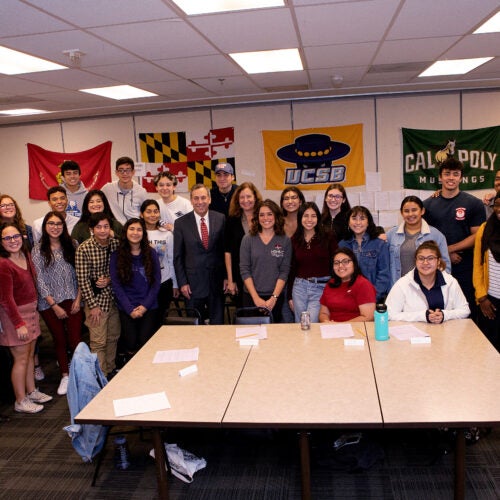 Harvard president meets with alumni, tells high school students: ‘You can get a great education anywhere’ 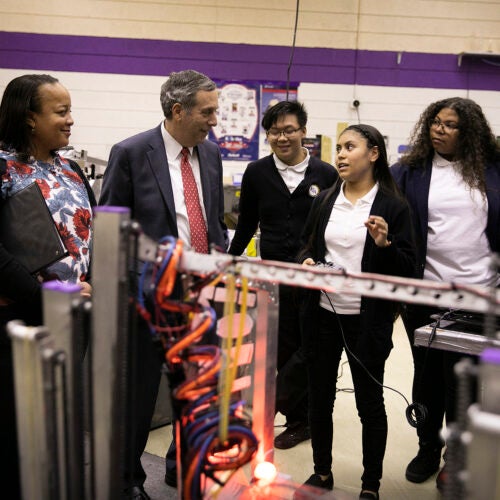 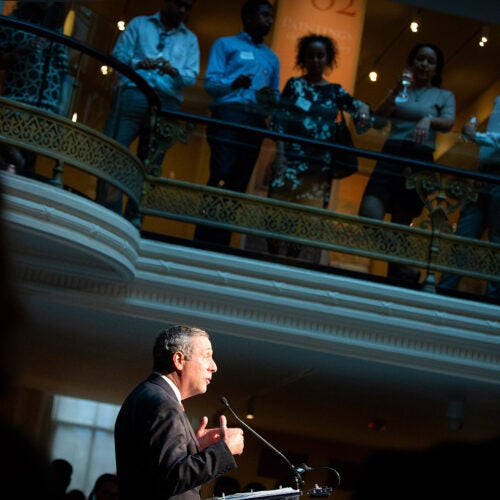