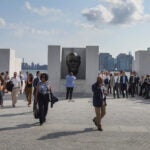 WASHINGTON, D.C. — During one of his first public events as the University’s 29th leader, Harvard President Larry Bacow signaled Thursday evening that he will be a steadfast advocate for public service and higher education.

As president, Bacow said he plans to advocate not just for Harvard but “for all of higher education, for the enduring values of colleges and universities which have enabled the American dream for so many of us, because it’s important that we not let that dream die. It’s important that each of us commit ourselves to work to ensure that the next generation has opportunity just as we have enjoyed.”

His remarks came during a reception at the National Portrait Gallery and the Smithsonian American Art Museum in Washington. The event was the latest annual summer gathering organized by the Harvard Kennedy School (HKS) Institute of Politics’ (IOP) Summer in Washington Program, which helps introduce Harvard undergraduates working as interns or research assistants to the range of careers and experiences available in politics and public service.

The capital event held special resonance for Bacow. More than 40 years ago, he and his wife, Adele, spent their first summer as a married couple working in the city. The experience inspired them to consider working in the government after they finished graduate school, he told the crowd in his brief remarks. “But life intervened, as it sometimes does,” said Bacow, who instead headed to Cambridge as a two-year, adjunct faculty member at the Massachusetts Institute of Technology. “And two years turned into 24 years.”

The son of Holocaust-era refugees who arrived in the U.S. after World War II, Bacow said he is one of the countless college graduates whose life was “transformed by the opportunity to get an education” and by the doors that opened for him because of that.

The president’s predecessor, Drew Faust, often promoted public service and was a leading supporter of higher education. With his remarks, Bacow signaled he would continue that unwavering commitment.

Bacow, M.P.P. ’76, J.D. ’76, Ph.D. ’78, said he was blessed to have studied at Harvard and acknowledged that a Harvard education carries great responsibility.

Such work, he said, isn’t divided along party lines or by political ideologies.

“We all have to work together: liberals, conservatives, Democrats, Republicans. It is our responsibility to make sure that we leave this country and this world a better place than we found it. It is an honor beyond words to be part of this journey together with each and every one of you. Thank you for what all of you do for Harvard, for what each of you do for the country. I look forward to working with you in the years to come.”

The nearly 500 guests at the two-hour event had access to the galleries as well as the remarks by Bacow in the museum’s Luce Foundation Center. The space there is covered by block-long skylights and showcases more than 3,300 works of art on two levels, including sculptures, portraits, craft jewelry, and paintings from the 18th‒20th centuries.

Attendees snacked as they strolled through the nearby Great Hall, a vaulted space adorned with late-19th-century architectural highlights. One nearby gallery featured portraits, including a rendering of former first lady Michelle Obama by artist Amy Sherald. Nearby were portraits of Harvard’s E.O. Wilson, Pellegrino University Professor Emeritus, and of author and Harvard honorand Toni Morrison.

Lisa Fitzpatrick is an epidemiologist and infectious-diseases physician who received her master’s in public administration from the Kennedy School’s mid-career program in 2015 and currently runs a health literacy and patient-engagement business for individuals from low-income backgrounds. She was invited by the director of admissions at HKS to meet Bacow, and said beforehand that she was looking forward “to seeing who he is, and seeing what he does. I wish him luck and I also hope that he is able to emphasize service across all the Schools at Harvard because I think it’s really important, no matter what School you are in.”

For more than an hour, Bacow and his wife wandered amid the crowd, connecting with old friends, shaking hands with well-wishers, and warmly greeting students, alumni, political pundits, media representatives, and members of Congress, including U.S. Sen. Jack Reed, M.P.P. ’73, J.D. ’82, of Rhode Island, a friend since their student days at the Kennedy School.

A few minutes later, Bacow chatted with U.S. Sen. Chris Van Hollen, M.P.P. ’85, of Maryland, and introduced himself to U.S. Sen. Pat Toomey ’84 of Pennsylvania, and to Toomey’s daughter Bridget, who will attend the College in the fall.

“This is my first time meeting President Bacow. He is a very, very charming and engaging man and obviously enormously accomplished, so I am looking forward to getting to know him and learning about his vision for Harvard,” said Sen. Toomey. “Harvard is a unique and really important institution for America, and so the leadership of Harvard is really important too.”

“What better way to celebrate public service than to have the president of the University do his first public event in the nation’s capital with alums who are doing amazing work?”
— Carlos Díaz-Rosillo, senior deputy chairman and chief operating officer at the National Endowment for the Humanities

As he made his way around the room Bacow frequently stopped for photos, even appearing in a brief smartphone video for Harvard College students and IOP members Grace Bannister ’21 and Diego Garcia ’20, who were posting to the University account. Bannister, who is spending her summer interning for U.S. Sen. Shelley Moore Capito of West Virginia, liked that Bacow kicked off the segment with a Yale joke. “He is pretty funny,” said Bannister.

Garcia, a government concentrator working for the summer at Quorum Analytics, a big-data startup founded by Harvard undergraduates, said Bacow’s presence sent an important message. “I really feel that we are being appreciated and that we are getting a lot of important [attention] by the fact that President Bacow is here … in Washington, D.C., to celebrate public service and the work we are doing.”

Carlos Díaz-Rosillo, M.P.P. ’98, A.M. ’03, Ph.D. ’09, the senior deputy chairman and chief operating officer at the National Endowment for the Humanities who until recently was director of policy and interagency coordination for the Trump administration, said he was thrilled to be part of the Thursday celebration. Prior to working in the White House, Díaz-Rosillo spent 20 years at Harvard pursuing his degrees and serving as a government lecturer and Dunster House resident dean.

“What better way to celebrate public service than to have the president of the University do his first public event in the nation’s capital with alums who are doing amazing work?” said Díaz-Rosillo.

Two of Bacow’s former Kennedy School classmates said the Michigan native’s intellect, humility, and temperament make him a perfect choice to lead Harvard. “Personality-wise, everybody is going to get along with him. He knows how to get people together,” said Joseph B. Tompkins Jr., M.P.P. ’75. Susan J. Irving, M.P.P. ’74, Ph.D. ’77, said she hoped Bacow would help dispel any misconception that Harvard is for the elites. “It’s hard to meet Larry and think snob,” said Irving, since “it doesn’t fit.”

The importance of service

Support from the Kennedy School’ summer program enabled current IOP Director Mark Gearan ’78 to intern as an undergraduate in the office of the late U.S. Rep. Robert Drinan in 1978. He called the experience life-changing. An IOP-backed internship or research position “opens the doors of possibility, it opens the window of service across the spectrum politically” for undergrads, said Gearan, “and I think is yet one more testament to Harvard’s mission of really working toward creating citizen leadership in our country.”

Before Bacow spoke, Christabel Narh ’18, the IOP’s summer program coordinator, addressed the crowd. Narh moved to the U.S. from Ghana at age 9 and quickly took advantage of the country’s education system. At Harvard she worked with the IOP, and with the Phillips Brooks House Association helping vulnerable women and children in Boston.

“Harvard gave me the opportunity to engage in direct service and social action as a means to promote social change and combat the harmful effects of power imbalances within our society,” said Narh.