In Allston, the ArtLab rises 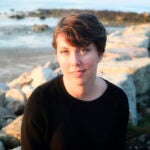 As plans for Harvard’s Allston campus continue to take shape, the University is working to ensure that the future hub for experimentation and innovation in the sciences, business, and entrepreneurship also becomes home to a boundary-breaking arts space, which will have its opening celebration this fall.

The ArtLab, a 9,000-square-foot structure on North Harvard Street in Barry’s Corner, is undergoing final preparations to host faculty, artists, and students in an interdisciplinary laboratory devoted to creativity, innovation, collaboration, and connection. The building was designed by the German architect Barkow Leibinger in partnership with Watertown’s Sasaki.

The structure has a pinwheel configuration, with studio spaces, sound and recording rooms, a small exhibit area, and a workshop arranged around a 1,600-square-foot multipurpose, open-space hub that can be used for collaboration, gatherings, exhibitions, film screenings, dance rehearsals, and more. The ArtLab will be overseen by the Office of the Provost, and used by artists University-wide.

The building’s name is a nod to the collection of innovation labs already in place in Allston: the Harvard i-lab, the Launch Lab X, and the Pagliuca Harvard Life Lab. The arts space also builds on Harvard’s longstanding embrace of interdisciplinary work and scholarship, and the influx in recent years of faculty who are accomplished artists and performers, among them dancer Jill Johnson, pianist Vijay Iyer, jazz singer and bassist Esperanza Spalding, writer Teju Cole, A.R.T. artistic director Diane Paulus, and flutist Claire Chase.

The ArtLab will underscore the importance of offering skilled creators a place where they can connect with other artists in various fields to reinvent and reimagine, and to conduct the research their respective crafts demand. It also helps show that the laboratory — a place for experimentation, observation, and practice in a field of study — is not the domain of the sciences alone.

“People often do not understand that artists actually do research,” said Lori Gross, associate provost for arts and culture, “and that is an incredibly important message to convey to the Harvard community and beyond. The ArtLab can become a place for exploration and experimentation.”

In a sense, the building was also made for Bree Edwards, the ArtLab’s new director. Edwards, who is well versed in artistic collaboration, was director of the Northeastern Center for the Arts and held positions at the Asheville Art Museum in North Carolina and the Cynthia Woods Mitchell Center at the University of Houston. Trained as a contemporary-art curator, Edwards said her professional life has almost entirely focused on the development of interdisciplinary programs and the creation of new work. Her new Harvard role aligns perfectly with her interests and experience, she said.

“Throughout my career I’ve been seeking to be involved in the process of making new work with a range of artists working in different media,” Edwards said. “There are so few places to show works in progress at Harvard and in Boston in general, which makes the ArtLab truly unique and exciting. It’s about making the hidden process visible.”

In the next several months, the building will host open rehearsals, workshops, and classes led by Harvard professors as well as a number of visiting artists, including the internationally acclaimed tap dancer Ayodele Casel, who will be in residence and working with students at the ArtLab through March 1.

Future projects will engage faculty such as Chase, a professor of practice in the Music Department, who tries to cultivate in her students the notion of “a shared space for those early experiments that are often performed in isolation.”

“For me, as an artist and as a teacher and as a community-builder who is very interested in the natural intersection of communities as they come together to make something new, this is such an important contribution to the Harvard community,” she said, and also “to the art-making community at large.”