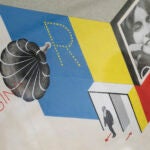 Ruben Reyes Jr. ’19 has written numerous columns and editorials for The Crimson, poems and essays for literary journals and websites, and most recently a short story for the Florida Review Online.

While that experience has given Reyes the confidence to call himself a writer, it’s also made it poignantly clear to the southern California native: Measuring writers’ success by what they’ve published says to writers who haven’t gotten published that their work doesn’t matter.

For Reyes, that kind of exclusivity is a problem. Words can have power whether they are written by an author for a prestigious publication or they are sitting unseen on the laptop of someone who writes fiction as a hobby. To help change that disparity, Reyes recently launched a literary magazine that showcases authors from all walks of life who not only have stories to tell, but are empowered as the best writers to tell them.

The magazine, Palabritas, means little words in Spanish, and features the voices of 34 writers who, like Reyes, identify as Latinx, a gender-neutral term for Latinos and Latinas.

The multilingual magazine is off to a strong start in that quest. It features poems, essays, and works of fiction that challenge popular assumptions of what it means to be Latinx, including perspectives from Latinx communities that are often ignored, such as Asian Latinx, Latinx people living in non-Latin countries, and queer and transgender Latinx authors.

“When I was thinking about this publication, access as broadly as possible was one of our main missions,” Reyes said. “In every issue, we’re aiming to publish people who have never shared their work publicly along with people who already have bylines in other literary magazines. [We want to] publish these people side by side.”

Reyes, who grew up in Diamond Bar, Calif., sees a space like the one Palabritas offers as crucial for growing a writer’s confidence. It’s also a place where Harvard students can explore working in publishing. Reyes assembled a team of 10 student editors and multimedia designers to put together the magazine. So far, more than 200 copies of the first issue have been distributed.

For Reyes, early confidence boosts played a major role in why he kept writing. Serving as fuel for him was the community response received because of his columns in The Crimson and a Latinx newsletter (which he named Palabritas after) re-publishing an essay he wrote.

“It really helped me think of myself more as a writer, as a serious writer,” said Reyes, who believes the craft can serve a larger purpose to heal, process real events, and think about the future.

For Reyes, writing serves a mix of those purposes.

“I just started writing down thoughts, feelings, and eventually those made it into full stories,” said Reyes, who first put words to paper as a teenager. “I wrote about angsty-teenage stuff — growing up in the suburbs, arguments with friends, uncertainty about what life would be like after high school, a desire to leave my hometown. They seem like petty concerns now, but they meant a lot back then, and I turned to fiction to work through them.”

Today Reyes’ writing stems mainly from his identification as Latinx. He often uses El Salvador, from where his parents immigrated, as a foundation. The short story he published in the Florida Review Online was about a Salvadoran family dealing with an aging grandparent. An essay he published this fall in the Brain Mill Press was about discovering Salvadoran authors. He is currently at work on a collection of short stories exploring the lives of Salvadoran immigrants.

“It influences everything,” Reyes said. “I think that’s why I’ve turned to writing to bring more dignity to a region and a people that I know really well because they’re my family, my parents, my grandparents, a lot of my friends here.”

Through writing, Reyes is combatting simple narratives surrounding El Salvador and its people. With Palabritas, Reyes wanted it to do the same for all Latinx people. To achieve that, Reyes and his team opened submissions not just to Harvard’s Latinx community but worldwide. Eighty-five writers submitted more than 100 pieces (most in English but some in Spanish or both languages.)

Standouts in the first issue include: an essay by Jasmine Hyppolite ’21, who spent a summer in Peru where she experienced racism as an Afro-Latina; a poem by New York-based Óscar Mosés Diaz reacting to President Trump’s announcement blocking temporary protected status for Salvadorans; and a short story about a kidnapping, by marketing and communications professional Santiago Jurksaitis, who was born in Colombia but lives in the Czech Republic.

“What we were looking most for was to show as many narratives and versions of being Latinx as possible, which is why we made a big effort to include a lot of people who are often overlooked in popular conceptions of Latinx people,” Reyes said. “I think the first issue, for sure, is so much better for that.”

Though Reyes, who is a concentrating in history and literature and applying for graduate school, graduates in May, Palabritas will continue to establish itself as a new space for Latinx writers and editors. That sense of community building was one of the key ideas behind starting the magazine, Reyes said. Harvard’s Latinx community, which is about 12 percent of the student body, is tightly knit. Reyes hopes Palabritas adds value by showing readers the power Latinx stories and words have, especially in seeing their own words published.

“It took me a while to consider myself a writer,” Reyes said. “I’m convinced that all someone has to do to be considered a writer is write. One of my hopes is that Palabritas can be a supportive publication for people to share their work and become comfortable calling themselves writers.”