A rise through the ranks 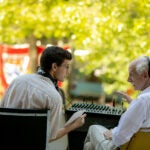 The ‘spiritual leader’ of WHRB

When Becky Ward walked through the airy cafeteria spanning Harvard Medical School’s (HMS) Goldenson and Armenise buildings, she noticed cashier Calixto Sáenz taking a break, a textbook open on the table in front of him.

As she passed, Ward asked Sáenz what he was studying.

The answer got the attention of Ward, executive director of the Department of Systems Biology. She told Sáenz about a new facility being developed at HMS — a microfluidics core. The shared facility was intended to connect researchers at the School and affiliated hospitals with new techniques making their way into labs across the country.

Microfluidics allows scientists to conduct microscale research, cutting costs by reducing the volume of chemicals needed, freeing up space so that several experiments can run at once, and even accelerating results. A director had been hired for the initiative, Ward told Sáenz, and the School was considering adding a paid intern to help. Did he want to apply?

Sáenz wasn’t sure — not because he was blind to the opportunity. The problem was time.

A native of Colombia, Sáenz had come to Boston months earlier for a polymer plastics engineering graduate program at the University of Massachusetts, Lowell. With no family in the area, he was sharing an East Boston apartment with a friend and taking the T to HMS for his 6 a.m.–3:30 p.m. shift at the Greenhouse Cafe, then boarding a Lowell-bound train for his evening classes. He did homework until 1 a.m. Two or three hours’ sleep a night was routine.

To cap it off, Sáenz already had an internship, albeit unpaid, in the Medical School’s IT department, a post he had landed months earlier with the help of Harvard’s Bridge Program. For some people, the decision to exchange an unpaid internship for a paid one would be simple. But Sáenz’s loyalty to the IT director, Aun Em, who had coached him in English, added to his hesitation.

“He didn’t want to abandon Aun,” said Carol Kolenik, the Bridge Program’s founder and former director. “She said, ‘Take it.’ ”

Sáenz did, and he hasn’t looked back. In the past decade, he’s been promoted from intern to research associate to manager and ultimately to director.

“It’s always a goal to look for people who have a lot of potential but haven’t had a lot of opportunities, so I took a chance on him,” Ward said.

Sáenz’s success — and the personal drive behind it — hasn’t gone unnoticed. Last year, he was selected to represent Harvard’s 18,000 staff members with remarks at President Larry Bacow’s October installation. The moment proved memorable for more than just Sáenz.

“It was spectacular,” said Laura Lamp, a friend and onetime colleague who guided him through his speech prep. “It blew my mind.”

Sáenz grew up outside of Cartagena, Colombia. His parents worked hard to give him and his sister an education, he said. He earned bachelor’s and master’s degrees — in electrical and electronic engineering and industrial automation of processes — from Universidad Tecnológica de Bolívar.

While working in industry after graduation, he had a chance to visit Boston and was impressed with the resources devoted to research in the region. He had found the place where he’d continue his education.

“I don’t regret a single step, even that first year,” Sáenz said of his grueling schedule after arriving. “I learned so much.”

Once he started working in the microfluidics core, Sáenz channeled his efforts into mastering the field. Taking the reins at the facility, he expanded its offerings to include consulting services for those who lacked the knowledge or time to use the equipment themselves.

“He’s one of the most driven people I know. It makes me feel lazy — which I don’t appreciate,” joked Lamp, who worked with Sáenz at HMS but has since moved to the Harvard John A. Paulson School of Engineering and Applied Sciences. “It’s a beautiful thing to be around someone who has a goal and it’s an actual action item.”

Today, the core has some 190 to 200 clients from the School, affiliated hospitals, nearby institutions, and even regional companies. 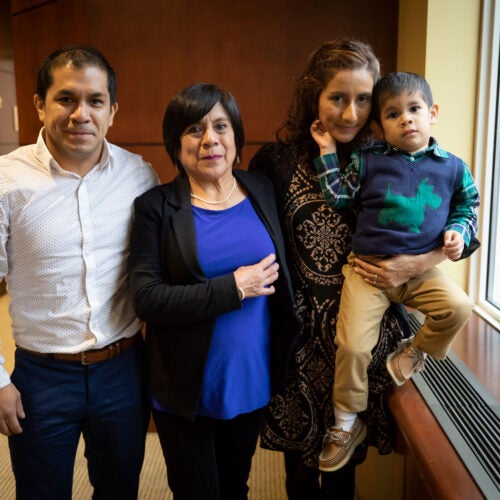 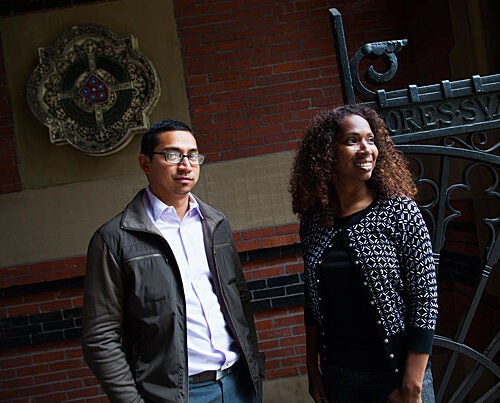 From one dreamer to another 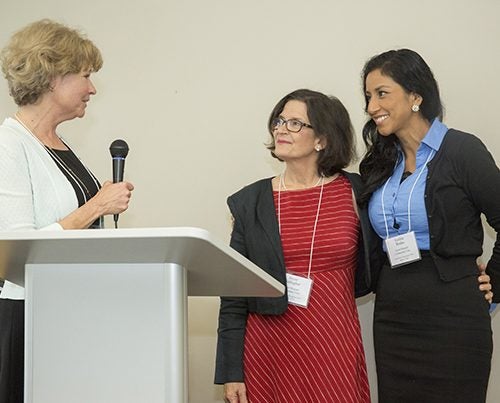 A bridge to the future

When organizers of Bacow’s installation were looking for candidates to speak on behalf of University staff, Kolenik suggested Sáenz, who almost missed his opportunity because he dismissed the email as a scam and moved it to his junk folder.

The next day, a nagging voice in his head asked, “What if it’s real?” So he took a second look, eventually convincing himself that the invitation was authentic. Once he said yes, Sáenz leaned on his friends for help, bouncing ideas and drafts off them. He came up with a short speech describing his own Harvard journey and his gratitude for the assistance he found on campus.

On the day of installation, Sáenz was so nervous he couldn’t bring himself to eat before taking his place on the Tercentenary Theatre stage along with Gov. Charlie Baker, MIT President L. Rafael Reif, and four previous Harvard presidents. But when his moment came, he delivered his message loud and clear.

“If someone had told me 15 years ago that I would be on this stage, I simply wouldn’t have believed them — at that time I was still struggling to get a quality education in a new country and a new culture and not even in my native language,” Sáenz told the audience that included his family in Colombia, who watched the livestream with an enthusiasm, he said, normally reserved for soccer games.

“But here I stand. And I stand here not only because of my family — gracias, mami y papi— but also because Harvard values commitment, perseverance — and works to provide opportunities to further the careers and professional development of its members.”

Sáenz said he was honored by the opportunity to speak for all of Harvard’s staff and that the experience is one he’ll never forget, even as he continues on his path of self-improvement — he’s currently on his fifth biotechnology class at the Harvard Extension School.

Today, among his other duties at the microfluidics facility, Sáenz mentors interns in a program he created for students from local community college — two of whom have gone on to UMass Lowell, and another one to Boston University.

As he told Kolenik: “I’m paying it forward. I would never have gotten out of food service without the internship.”