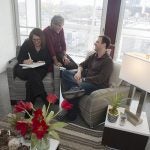 It’s said that it takes a village to raise a child. The same could be said of a family.

Emilia Rodas immigrated to the United States from Guatemala in 2002. She left her family behind, coming in search of a better life. She spoke little English, and though she went to college in Guatemala, she found herself in this country without many marketable skills. The odds were against her. But she was determined to stay — and to succeed.

“When I first came to America, I worked doing housekeeping in Burlington. After that I worked in a restaurant. Eventually I got a job working with seniors, which I really began to enjoy. I soon began to realize that this was what I wanted to do with the rest of my life — what I was meant to do — work with the elderly,” she said. “But to do that I knew that I would need training, a lot of training. And,” she laughed, “I would need to work on my English. So I knew what I wanted, but didn’t know where to start.”

Luckily for Rodas and her now 12-year-old son, Jason, they had ended up settling in the Boston neighborhood of Allston-Brighton, and found themselves surrounded by a community as tightly knit as they come.

A group of local educators, organizations, and nonprofits had been trying to figure out how they could better serve residents by providing social services more efficiently. They aimed to reduce logjams, shorten wait times, and eliminate red tape so more people could more easily get the help they needed.

Dozens of organizations had been in the area for years and were doing a strong job with their core demographics. But what if, the groups thought, they could pool resources, talents, and space to get more efficient results?

Thus was born the Allston Brighton Adult Education Collaborative. Made up of 22 organizations across the neighborhood, the coalition began working together to think strategically about educational opportunities for local adults.

“We have an incredible circle of collaborators here that respect each other and can refer people back and forth to one another. It’s a system that works. We saw it work for Emilia, and we’ll hopefully see it work for many more people in the future,” said Carol Kolenik, director of the Harvard Allston Workforce Development Program, one of the groups in the coalition.

Rodas said she wanted to make significant, lasting changes in her life right away. She signed up for a course in English as a second language (ESL) at the Literacy Connection, another coalition group. The program, which is run by the Sisters of Saint Joseph, specializes in helping low-income adult immigrants and refugees with English-language skills and citizenship preparation. It was there that Rodas met Mary Rita Weschler and Sister Pat Andrews.

“Emilia recognized her need for help, and reached out to Sister Pat and myself,” said Weschler, director of the Women’s Table, which was founded by the Sisters of St. Joseph. “Through the Literacy Connection and the Women’s Table, we were able to assist Emilia with individual advocacy and support. She was open to this and extremely grateful.”

Rodas excelled and eventually signed up for additional English classes held at the Gardner Pilot Academy, where Jason went to school. She studied any chance she could get, at nights or after work while Jason was at the afterschool program.

“There was something so special about her. She was so smart and so motivated. She was quick, engaging, and social. It was a perfect fit in my class,” said Erica Peterson, Rodas’ ESL instructor at the Gardner.

Weschler introduced her to Kolenik, who was running computer-training programs for job seekers at the Charlesview Community Center. Kolenik found Rodas a quick and dedicated learner and, according to Rodas, Kolenik quickly became a trusted mentor.

“Carol believed in me,” Rodas said. “She took the time with me to help guide me and listen to me. My son and I lived here alone. I needed somebody like Carol. She gave me the steps. She changed my life and the life of my son. She believed in me.”

Kolenik insists that Rodas herself deserves all the credit. “When I first met her, she was at her low point, and you could tell how hard she was fighting to pick herself up. I’m proud of her and happy for her. Today, she’s doing great and is happy,” said Kolenik.

With Kolenik’s continued help, Rodas was introduced to Beverly Bass, a career counselor at the Harvard Ed Portal. Bass worked with her on assessing her career goals and matching them with her personal values and natural strengths.

“When Emilia first walked into the Ed Portal, I knew she had so much charisma and without a doubt the passion to succeed. She knew she wanted a career that involved helping other people,” said Bass.

“From the moment I showed Emilia the flier announcing the upcoming CNA training, her career took flight,” said Bass.

The 14-week program promised to be challenging and time-consuming. As a single mother with a full-time job, and no prior nursing experience, Rodas knew it would be challenging. She was nervous. Plus, it would be taught in a language she was still mastering. But she applied, was accepted, and was awarded a full scholarship worth nearly $6,000 for the course.

She quickly became a star pupil, never missing a class, never shying away from asking questions, and always completing her assignments.

Today, she is employed in the hospice division of Good Shepherd Community Care. Jason is in the seventh grade, is in the mentoring program at the Ed Portal, and enjoys being enrolled in the swimming and diving program made possible by an Ed Portal scholarship. Mother and son are thriving. Rodas and Good Shepherd recently were honored at the annual Allston-Brighton Legislators Breakfast for their ongoing work in the community.

“Emilia has been a wonderful addition to our team of caregivers. To care for our fellow human beings at the end of their lives is work of the heart, and Emilia has the most beautiful and caring heart,” said Joyce Gallagher, director of nursing at Good Shepherd. “If I were dying I would want Emilia to be one of my caregivers, as her warmth and compassion is tangible.”

“It was such a blessing to find people and places that would give me the training for what I wanted to do, and give me the opportunity to learn English at the same time,” said Rodas. “Back then was a very hard time in my life, a very difficult time. For my son and I to meet these people, to form these connections … Thank God these people and these places exist. I am so thankful to Harvard, Carol, Beverly, Mary Rita, Erica — the entire coalition, the entire community. Without them, without their support …”

Coalition members hope to replicate such success. They hope to provide a remarkable amount of resources that people can tap into to thrive.

“This is the perfect example of what a community should be. We are trying to make sure that everyone has what they need, in the easiest way possible,” said Peterson. “We’re all here to supplement each other. There is no competition. We all have our own strengths and really believe that we work better together.”