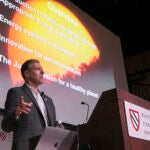 For decades, scientists have assumed that the hundreds of species of salamanders that lack lungs actually “breathe” through their skin and the lining of the mouth, and Harvard researchers are providing the first concrete evidence for how they do it.

A new study, authored by James Hanken, Alexander Agassiz Professor of Zoology in the Museum of Comparative Zoology and curator of herpetology; Zachary Lewis, who completed his Ph.D. while working with Hanken; and then-Harvard Extension School student Jorge Dorantes, shows that a gene that produces surfactant protein c — a key protein for lung function — is expressed in the skin and mouths of lungless salamanders, suggesting it also plays an important role for cutaneous respiration. The study is described in a paper published in the Proceedings of the Royal Society B.

“They are deploying the same kind of machinery that lunged salamanders use,” Hanken said. “Generally, this had only been looked at from a morphological standpoint, so this is exciting because this is the first molecular-genetic correlation for this very interesting trait.”

For years, scientists have pointed to salamander anatomy to support the idea that they breathe through the skin and mouth.

“What has been known for decades is that their blood supply is shunted from the heart to the skin,” Hanken said. “There is a blood vessel that’s not present in other animals — it would otherwise go to the lungs, but instead is goes to the skin.

“There are also a lot of enriched blood vessels that go to the buccal cavity,” he added. “If you look at a salamander when they’re still, they’re not breathing because they don’t have lungs, but you can see a pulsing in their throat. It’s believed that they’re basically pumping air in and out of their mouths.”

That strong circumstantial evidence, Hanken said, meant that few, if any, studies were done to look closely at exactly how salamanders breathe. In fact, the only work he and Lewis were able to turn up on the topic came in the form of a nearly century-old unpublished Ph.D. dissertation.

“The dissertation, by a woman named Grace Mekeel, was done in 1930, and was only published in one meeting abstract,” Hanken said. “She made serial sections of embryos and indicated that, in lungless salamanders, the lungs actually begin to form, but then stop.”

After obtaining a copy of the dissertation, Lewis first set about confirming those initial findings before unleashing more advanced genetic tools to examine precisely what occurs during the salamanders’ development.

“If you look at a salamander when they’re still, they’re not breathing because they don’t have lungs, but you can see a pulsing in their throat. It’s believed that they’re basically pumping air in and out of their mouths.”
— James Hanken

“There is a tremendous amount of information that is known about lung development,” Hanken said. “People have defined precisely which genes are expressed when the lungs form … and when Zack looked at the genes that are expressed in salamanders, they have them. They don’t have lungs as adults, but they do initiate the process of forming them when different organ rudiments are formed.”

The real surprise, Hanken said, came when Lewis went searching for other genes associated with lung function and discovered lungless salamanders actually have two copies of the surfactant protein gene.

“In lunged salamanders, both copies of the gene are expressed in the lungs, but when we looked at the lungless animals … we found that in the larvae, that second copy, which we called SFTPC-like, is expressed in their skin,” Hanken said. “But when the larvae metamorphose and come on land, their skin can dry out and become cornified, and diffusion can’t occur as readily. At that point the expression changes from the skin to the oral cavity.”

“The fact that the location where the gene is expressed matched the preferred site of respiration at each life history stage made us think that has some involvement in gas exchange,” said Lewis.

While there is some evidence that SFTPC allows the lungs to inflate and deflate and keeps them from collapsing, another role of the protein is to reduce the thickness of a thin liquid layer in the lungs interior called the hypophase. 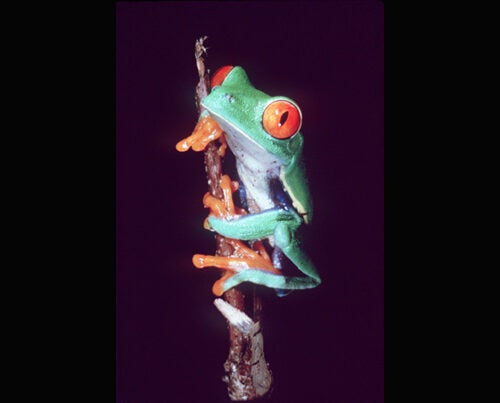 New insight on development in study of frogs

“One of the determinants for how much gas exchange occurs is the distance between the oxygen supply and the blood supply,” Hanken said. “So one thing the protein is believed to do is make that hypophase thinner, allowing more oxygen in.”

In lungless salamanders, Hanken said, it appears that the protein plays an identical role and helps facilitate their ability to absorb oxygen through the skin and oral cavity.

Though surprising, Hanken noted that the result is not without caveats.

“What we’ve documented is expression,” he said. “We actually haven’t demonstrated that the protein is there. We weren’t able to come up with an antibody for the protein.” Once the structure and the function of the protein is better known, this newly discovered duplicate protein may have important therapeutic implications. “Preterm infants often suffer from respiratory distress syndrome due to deficient surfactant production. Perhaps this new surfactant protein could be beneficial if it were administered in the surfactant cocktail provided to newborns,” said Lewis.

“There is a great deal of interest in gene duplication because this idea is very important in evolution,” he said. “What gene duplication allows is for an organism to carry on doing what it’s always been doing, because that function is not lost. But there is a second gene which can be deployed in some other way.”

And while lunglessness has been observed in a handful of other creatures, there are hundreds of salamander species that lack them.

“In the case of frogs and other animals, you might be inclined to think that it allows that particular animal to get by, but it’s not that much of an advantage, because only one species has it,” he said. “But in the case of salamanders, the majority of living salamanders are lungless, and they don’t seem to be particularly constrained by it … that’s why we would like to think that perhaps they have this molecular assistance that’s helping.”

Going forward, Hanken said, future studies could continue to work on efforts to identify whether other surfactant proteins are found in the skin of lungless salamanders.

“This is what’s fascinating about comparative biology,” Hanken said. “We can see this is how salamanders do this; are other organisms doing the same thing? If they are, they all evolved convergently.”

“This project demonstrated to me that there are still so many unanswered questions about the physiology of animals that seem basic on the surface — like how do lungless salamanders breathe?” Lewis said. “In actuality, looking at these basic questions can give us insight into unexpected topics, like the evolution of genes and the genetic basis for peculiar physiological traits.”

This research was supported with funding from the National Science Foundation, the NSF Graduate Research Fellowship Program, and the Wetmore Colles Fund.