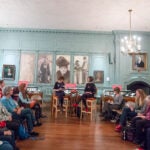 A new show at the American Repertory Theater lifts the curtain on a universal meeting space for men of color: the barbershop.

“There’s always been a need for black men to find spaces where they could commune without fear of a sort of judgmental or voyeuristic gaze,” said Nigerian-born poet-playwright Inua Ellams, who spent weeks traveling around England and Africa researching “Barber Shop Chronicles,” at the Loeb Mainstage through Jan. 5.

“Barbershops,” he added, “are that space.”

Twelve actors take on 30 roles in the play. From London to Nigeria, the men may see things through different cultural lenses, but the dynamics of their discussions are always the same, Ellams noted.

“There are cross-generational conversations going on; different types of people with different monies in their pockets clashing. There are the same questions about fatherhood, about masculinity, about belonging, about the legacy of colonization coming up.”

Ellams left out U.S. barbershops to avoid creating “another play which centered America.”

Still, he always planned to have “Chronicles” performed in the U.S. Throughout its American run, audiences have responded to the play’s themes, and to something else.

“People of various cultures who have digested negative stereotypes of black and African men love the play because it undoes a lot of those stereotypes,” said Ellams. They just see “people on stage being people.”

What does he hope viewers take from the work?

The show mirrors some of the challenging experiences its creator has faced in his own life. Born in Nigeria in 1984, Ellams was 12 when his family moved to London to escape persecution by people angry at his father for questioning his Muslim faith. Three years later the family moved to Ireland, where Ellams faced racism in school “more powered by ignorance than actual malice.”

At 18 he was back in London, but his unresolved citizenship status meant he couldn’t work or study. Writing became an outlet — first poetry, then “bigger and bigger stories.” When he was finally able to apply to college he lacked the funds, but he took comfort knowing that his works were being taught at the university he had hoped to attend.

Ellams’ next play, “The Half-God of Rainfall,” will premiere in the spring and be released in book form by 4th Estate, an imprint of Harper Collins. The production company Working Title has acquired the rights to his 2012 one-man play “Black T-Shirt Collection” and is working with Ellams to adapt the show into a four-part TV series.

As for “Barber Shop Chronicles,” the playwright is eager for the show to have a life beyond the A.R.T. stage.