Rallying for one of their own 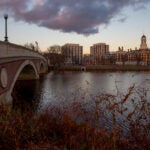 The way a community rallies around one of its members during hardship can speak volumes about its strength and bonds of unity.

On Tuesday during a fundraiser at El Jefe’s Taqueria, that sense of support was on full display when members of the Harvard community packed the Cambridge restaurant to support Ben Abercrombie ’21, a first-year safety who was seriously injured last year during his first football game for the Crimson.

The effort echoes important efforts by the Harvard Varsity Club’s Abercrombie Fund, which has drawn major donations to support Abercrombie and his recovery. Through such efforts, family and friends are hopeful for the day when Abercrombie can return to classes.

A celebrated recruit from Alabama, Abercrombie had risen on the depth chart through preseason training camp and was the only first-year to make the defensive roster for the season opener in Rhode Island. During what looked like a routine tackle, he suffered a severe cervical spinal cord injury and was paralyzed below the neck.

“Taking part in this event is simply a way of telling Ben that the Harvard University and Harvard Square communities have not forgotten the sacrifice he made representing Harvard after being here only a few short weeks,” said John Schall, owner of El Jefe’s.

Schall is contributing all revenue generated from sales and donations during the 20-hour stretch, known as Ben Abercrombie Day, to the Benson M. Abercrombie ’21 Fund, which the Harvard Varsity Club established to provide financial support to the Abercrombie family and any future Harvard College athlete who is severely injured while playing.

“My little brother, when he was exactly Ben’s age and also a state champion athlete, also had a catastrophic spinal cord injury,” Schall said. “I know from personal experience a little bit of what Ben and his family are going through, and I just want to help and let Ben know that, as a community, we care.”

A steady crowd of customers turned out in support of the effort. Inside, they crammed shoulder-to-shoulder as they waited to order or donate. Outside, the line at times curled around the corner.

“It’s definitely heartwarming,” said Lindey Kneib ’21. “It’s nice to see the University come together. It’s very grounding and very humbling. It says how strong we are together.”

“It’s incredible,” added classmate Jack Traina ’21. “It shows how close the Harvard community is and how much people are willing to rally for someone, even if they don’t know him personally.”

“I’m happy to see how many people are here,” said Aren Rendell ’19, as he stood amid the crowd. “It’s reading period, finals period. People are really busy. It’d be easy to just go to the [dining] hall and not care about someone who’s part of our community. I think it’s nice that people are willing to take time out of their day. It means something.”

It was El Jefe’s second year hosting the fundraiser. Last year, despite rain and freezing temperatures, more than 2,200 community members turned out. The event raised more than $27,000, with about $20,000 coming from food sales and $7,000 from donations made in-person and online.

This year, on a sunny but frigid day, the second Ben Abercrombie Day raised nearly $26,000, with $18,000 in sales and credit tip revenue, and more than $7,000 in cash tips, cash donations, and online contributions.

Along with community members, members of the football team were on site for the entire event to welcome customers, collect donations, and thank people.

“To us, he’s an inspiration,” said Adam West ’21 about Abercrombie.

“The way he deals with adversity is something we try to strive for in our program,” said West’s teammate Matt Farber ’20.

Many other members of the Harvard athletic community, like baseball player Chris McGrory ’21, also took part.

“It shows that we care about each other; we’re there for one another,” McGrory said. “There’s a special bond between Harvard athletes.”

So far, the Varsity Club’s Abercrombie Fund, which was established in 2017, has raised more than $450,000. Already it has helped pay for a stand-up wheelchair for him, and helped cover the costs for the family’s travel to Cleveland for a recent procedure.

The fund also helped Abercrombie return to campus for the first time since his injury to attend this year’s Harvard-Yale game.

“It was an amazing trip,” said Marty Abercrombie, Ben’s father. “He had a smile on his face the entire time we were up there.”

“Ben’s wish of returning to Harvard as a student is going to require a monumental effort on his part,” said Bob Glatz ’88, the Broadbent Family Executive Director of the Harvard Varsity Club. “The Abercrombie Fund provides the Harvard and Cambridge communities a way to support Ben every step along the way.”

“Ben’s goal when he went up to Harvard was to earn his Harvard degree,” Marty Abercrombie said. “We’re not going to let this physical setback stand in his way.

“We’re so excited that John and El Jefe’s, along with the Harvard Varsity Club, is doing the second annual event for Ben,” he added. “We anticipate many more needs going forward.”

Donations to the Benson M. Abercrombie ’21 Fund can be made online through the Harvard Varsity Club’s website by visiting www.harvardvarsityclub.org/AbercrombieFund.