A lesson for every listener 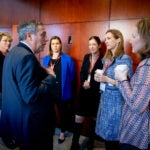 As beauty lies in the eyes of each beholder, inspiration is filtered through the ears of every listener — and so a captivated crowd on Thursday night drew many lessons as Malala Yousafzai accepted this year’s Gleitsman Award from the Center for Public Leadership at Harvard Kennedy School (HKS).

“For me personally, it all comes down to her bravery,” said Tyra Walker, an A.M. student at HKS. “So few people at such a young age understand the stakes of an issue such that they would literally put their safety on the line to do what they did. Even more than the bravery [Yousafzai] exhibited at that young age, the bravery that she exhibits now to continue speaking after being attacked, it’s a model for all of the freedoms that we want to see in the world.”

“What stands out to me is that even after she was shot, she had the courage to continue on this battle,” said Walker’s classmate, Roshni Mehta. “I’m just fascinated by how nothing could stop her.”

Yousafzai, the Pakistani schoolgirl who won the 2014 Nobel Peace Prize, came to international notice in 2012, when the Taliban shot her in the head in retaliation for her human rights advocacy, which became focused on education for women after the assassination attempt.

At “A Conversation with Malala Yousafzai,” Yousafzai said she drew her own inspiration from her father, who bucked institutionalized trends in a culture where women have almost no rights.

“He could have gone with that,” Yousafzai said during the forum, which was moderated by Professor of the Practice of Global Leadership and Public Policy Samantha Power. “He could have said, ‘That’s fine. Everybody does it. I’ll do it as well.’

Marisabel Jaramillo, fellowship program manager for the center, said she was most impressed by Yousafzai’s relationship with her father. “It really draws the point that, in order to fight all of this status quo, we actually need to find the strength within the male [community] as well,” Jaramillo said.

Newly elected Rep. Alexandria Ocasio-Cortez (D-N.Y.), at Harvard to take part in a congressional orientation program, asked Yousafzai about the role men can play. Yousafzai answered that female empowerment does not just benefit women, it improves society as a whole.

Sean Jackson, a first-year student at HKS, said Yousafzai’s commitment to education was what inspired him. “I really, really admire how she’s thinking about advancing equity by making sure everyone has the chance to maximize their full potential,” he said.

Izzah Ejaz, an A.M. student from Pakistan in the Harvard Graduate School of Education, said Yousafzai had inspired not just her, but many educators in her home country.

“A week after the incident happened with you, I signed up for teaching, and I’ve never looked back,” she told Yousafzai. 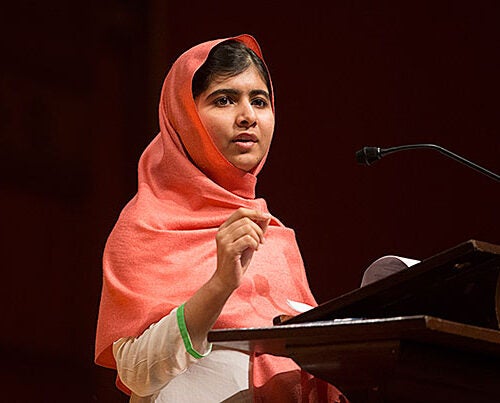 Malala Yousafzai, 16, of Pakistan, honored with Harvard Foundation's Humanitarian of the Year Award