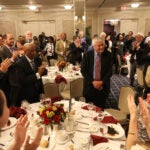 The Center for Public Leadership at Harvard Kennedy School has named Malala Yousafzai — the 2014 winner of the Nobel Peace Prize and an inspiration across the world — as this year’s recipient of the Gleitsman Award. The award honors Yousafzai, co-founder of Malala Fund, for her courageous leadership of a global movement to equip girls with 12 years of free, quality, and safe education.

“Malala speaks powerfully to the strength and perseverance of women and girls who are oppressed,” said David Gergen, professor of public service at Harvard Kennedy School and director of the Center for Public Leadership. “Her remarkable story has inspired girls — and boys as well — to follow in her footsteps and has activated a generation of practitioners and legislators who are fighting for equality in their own communities.

“Alan Gleitsman, whose philanthropy made this award possible, believed in individuals whose vision inspired others to confront injustice,” Gergen continued. “He was an ardent supporter of Harvard Kennedy School’s efforts to cultivate the world’s youngest changemakers and would be so pleased by today’s announcement.”

The award and $125,000 prize are given annually by the Center for Public Leadership to an individual or team whose leadership in social action has improved quality of life in the United States and around the world. The award will be presented to Yousafzai at a public ceremony at Harvard Kennedy School on Thursday, Dec. 6, 2018. The ceremony will include a conversation with Yousafzai moderated by Professor of the Practice of Global Leadership and Public Policy Samantha Power.

Yousafzai’s crusade for girls’ education began at the age of 11, when she blogged anonymously for the BBC about her experience growing up in Taliban-controlled Pakistan. Four years later, firmly established as a public figure in the fight for fair education, she was targeted for assassination by the Taliban. Following the assassination attempt, Yousafzai spent months recovering in the U.K., garnering international support from human rights organizations and governments around the world.

Less than a year after the attempt on her life, Yousafzai was inspired to launch the Malala Fund with her father. At 17, she became the youngest recipient of the Nobel Peace Prize for her work to ensure that girls who are out of school are given the opportunity to receive a safe, free education. Yousafzai’s current efforts focus on the global refugee crisis, particularly the plight of migrant girls in the Middle East. Her forthcoming book is titled “We Are Displaced: My Journey and Stories from Refugee Girls Around the World.”