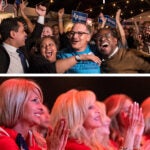 Democratic and Republican strategists came together at Harvard Kennedy School on Wednesday to unpack the election results at a session called “Midterms 2018: What Just Happened?” Both parties trumpeted victories, and the panelists agreed that political cooperation may get even rarer in the next two years.

“I don’t think it was a wave election,” said Douglas Heye, a Republican strategist and CNN commentator. “I see it as an unfortunate continuing of a realignment. So much of what we saw indicates that urban and suburban areas are going blue, and rural areas are going red, and there is a lot of ugly rhetoric on both sides. There is virtually no Republican Party in California, and no Democratic Party in Mississippi. The country is coming to a place where we don’t trust each other and we don’t like each other anymore. Where I have a problem with the president is in his rhetoric, which doesn’t help things.”

Moderator Margaret Talev, the Bloomberg News White House correspondent and Fall Resident Fellow at the Institute of Politics (IOP), asked the panel what effect the midterms might have on President Trump’s agenda and style.

“He’ll definitely go full speed ahead,” replied Marc Lotter, the former press secretary to Vice President Mike Pence. Trump, he said, is “not governed by ideology. He is willing to negotiate. He thinks in terms of delivering on the promises that he’s made. So the question is: Will there be a willingness [from returning House Speaker Nancy Pelosi and the Democrats] to give him something he can sign?” 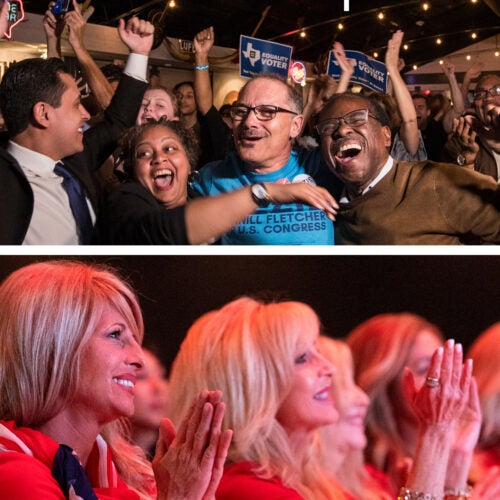 Each party has reasons to crow, as D.C. power realigns, analysts say

But the midterms were above all a victory for checks and balances, said CNN political commentator and IOP Spring 2018 Fellow Symone D. Sanders. Arriving late after a delayed flight, Sanders first noted an “untold story” of the midterms: “Many folks have said that the Democratic Party has forgotten the Midwest, but they just picked up a lot of Midwestern seats.”

She also promised a number of investigations after the House flips over. “Come January when the next Congress is sworn in, I think we can absolutely expect that there will be questions on Trump’s tax returns. The Democrats ran on checks and balances across the country, and you have to exercise your oversight. I want to know how we failed in dealing with Puerto Rico.”

The atmosphere occasionally got lively, especially after Lotter suggested that Democrats’ animosity toward Trump far surpasses that of Republicans toward previous President Barack Obama. “Republicans may have opposed Obama’s policies, but they didn’t hate him as a man. They didn’t wake up every day questioning the legitimacy of his presidency,” he said. Some viewers disagreed.

Heye said that both sides can shoulder some of the blame. “A lot of the rhetoric that is used toward the president I find to be very unfortunate. And some of the rhetoric [toward Obama] was blatantly racist. When a president is asked a hundred times to show his birth certificate, by what turns out to be his successor, that turns out to be a problem.”

The panelists also warned against jumping to any conclusions about the 2020 election. Noting how quickly things can change, Sanders said, “Hillary Clinton in 2016 lost in Wisconsin, Michigan, and Pennsylvania, and last night we picked up seats in those states.” Lotter said that Trump will be in a favorable position as long as the economy remains strong. “After the Gulf War, no serious Democrat would run against President George H.W. Bush. But then we went into recession.”

One telling moment came at the end of the panel, when Talev posed four questions as the news broke that Trump had fired Attorney General Jeff Sessions: Who will be the next Attorney General? Will it matter? Will the Robert Mueller investigations continue? And is something crazy about to happen?