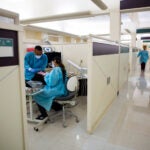 Some lessons feel like a root canal, and that’s just fine

In 2010, Peter Neffenger had his “summer of getting yelled at.”

As a U.S. Coast Guard rear admiral and the government’s deputy national incident commander for the Deepwater Horizon oil spill, Neffenger was the focal point for the government’s response — and for a lot of angry people.

Over 87 days, the crippled well spewed an estimated 4.9 million barrels of oil into the Gulf of Mexico, vastly dwarfing the nation’s previous largest spill, the 1989 Exxon Valdez disaster in Alaska’s Prince William Sound.

The oil flowing into the gulf meant a moratorium on both new drilling and fishing, and hundreds of thousands of people were out of work. The spill had the rapt attention of five unhappy governors — whom Neffenger spoke with daily — worried about environmental disaster on their shores.

It was a lot to manage, so Neffenger, MC/MPA ’95, turned to Leonard Marcus at the Harvard National Preparedness Leadership Initiative (NPLI), who was on the scene to document real-world crisis management.

“You know, Peter,” Marcus said after hearing Neffenger out, “you’re in the basement. We need to get you out of the basement.”

Marcus, a lecturer on public health practice at the Harvard T.H. Chan School of Public Health, is a leader of NPLI, a 15-year-old crisis leadership program that was born in the aftermath of the 9/11 terrorist attacks. Its lessons — which Neffenger first absorbed when he attended as a Coast Guard captain in 2006 — are aimed at leaders from government, business, and private organizations whose jobs make it likely they’ll play key roles in crises from natural disasters to disease outbreaks to financial meltdowns to organizational calamities.

The program’s graduates have responded to hurricane strikes, oil spills, Ebola and Zika outbreaks, the Boston Marathon bombings, the Massachusetts State Police overtime scandal, and many others. One of the most valuable takeaways, they say, is the notion that leaders — even those highly trained and in whom others have confidence —sometimes get overwhelmed and mentally “go into the basement,” the program’s term for the instinctive freeze-flight-fight response to threat.

“You’ve got a lot going on, you’ve got to make quick decisions, you don’t necessarily have all the information, and there’s a lot of complexity — lots of different players. There’s a lot of potential consequences to any decision you make,” said Neffenger, who went on to become the administrator of the U.S. Transportation Security Administration at a time when scandals and perceived incompetence had lowered public trust in the organization. “They call it ‘going into the basement.’ I grew up in the Midwest and … we ran to the basement every time there was a tornado warning, just in case it came blowing over our house.”

The idea is valuable, former participants say, in part because it helps them understand that the instinctive reaction is not a unique failing on their part. They also learn that they can come out of that basement, regain their bearings, and lead effectively.

“One of the mantras they have is, ‘This is about the success of those around you.’ It’s not about you. If everyone works to make everyone else succeed, then everyone succeeds. That’s a tool for getting yourself out of the basement — out of that panic mode.”
— Peter Neffenger, NPLI teacher

“The whole goal of this is ultimately to get you to remove your ego from the situation. Worrying about ‘What might happen to me,’ ‘What people might think of me,’ gets in the way of actually making good decisions about everyone around you,” said Neffenger, who teaches in the program. “One of the mantras they have is, ‘This is about the success of those around you.’ It’s not about you. If everyone works to make everyone else succeed, then everyone succeeds. That’s a tool for getting yourself out of the basement — out of that panic mode — to say, ‘Wait a second, everybody’s going to be panicked here, but we have an opportunity to try to fix it.’”

The NPLI is a joint program of the Harvard Chan School and the Center for Public Leadership at Harvard Kennedy School (HKS). The annual executive education program has been attended by 750 leaders from 95 organizations in more than 30 states and 10 countries. It has reached thousands more leaders through symposia and training sessions away from campus.

The initiative began after 9/11 when the federal government approached Marcus and HKS Public Service Professor David Gergen, director of the Center for Public Leadership and the NPLI’s other co-director. In the wake of those attacks, they discussed creating a leadership program to prepare government to respond to homeland security incidents.

The initiative launched in late 2003 to prep leaders for what’s often described as “the worst day of their lives.” The typical program stretches seven months, beginning and ending with an intensive week on campus. The time in between is spent working on cooperative projects with classmates. The program is built around the idea of “meta-leadership,” a framework that trains leaders to work toward the success of everyone around them. From that focus on the person, the program moves out to look at the situation a leader finds him- or herself in, and then further outward at the connectivity with others that mobilizes effective action.

Marty Cetron, director of global migration and quarantine for the U.S. Centers for Disease Control and Prevention (CDC), took the course in 2008 and said the idea that a successful leader asks, in essence, “How can I help you succeed?” resonated with him. Cetron said the concepts taught, often with catchy labels that make them easy to remember, are gathered from many sources and include some developed by program faculty and others borrowed from elsewhere. 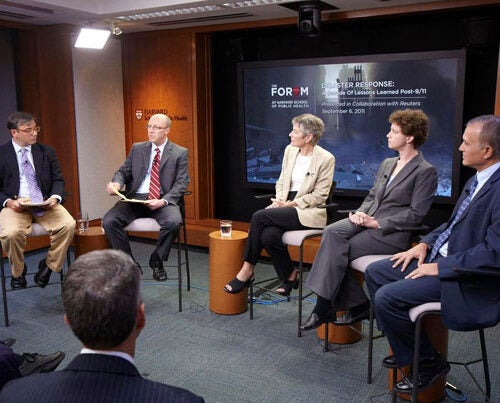 They are sometimes overlooked assets during disaster response

Cetron liked the program so much that he had Marcus and other faculty members present it at the CDC to help his team get on the same page, a critical need for an agency responding to complex emergencies such as the Ebola and Zika outbreaks.

The course relies heavily on case studies drawn from research into the experiences of leaders in times of crisis, with intense focus on the leader as a person. It is this focus that sets it apart from other, more academic treatments of leadership, Neffenger said.

“This was the first course in my career that ever focused on ‘Who am I as a leader?’ It’s all focused on the person. It really is understanding, first and foremost, what happens to you as a leader,” Neffenger said. “To me, it’s been transformative to the way I think about leadership, and I think it made me better at what I do.”

Massachusetts State Police Col. Kerry Gilpin, who took the course in 2016, returned this fall to talk to the 2018 class. At Marcus’ urging, she shared not just her official experience managing the State Police during multiple scandals, including the ongoing investigation into overtime abuse, but the personal journey that brought her there.

Gilpin talked about the trauma she experienced when her younger sister was murdered at age 15, and how she emerged from that dissatisfied with the investigation and angry at the police. It was only years later, she said, while working as a security guard during college, that she decided to take the test to enter the State Police Academy, embarking on a career that, shortly after she’d completed the NPLI course in 2016, would see her lead the academy.

In 2017, when she was offered the command of the State Police, she was taken by surprise. She had gotten a real estate license in preparation for retirement, but instead took the top job and embraced the mission of transforming an organization that was at a low point.

The immediate difficulties she faced reached outside the office. The day she was sworn in, her mother-in-law died, followed a few months later by her father. Two months after that, investigators announced that, after 31 years, they’d caught her sister’s killer. Regardless of her personal turmoil during those months, however, she had to carry on.

“It goes back to what you learn, both at the State Police Academy and NPLI: You have to put one foot in front of the other,” Gilpin said. “People are looking to you to lead them, and if you don’t, again, we will fail together, or we will survive together. So there’s no time to be emotional, there’s no time to second-guess, there’s no time to not be a leader, because that’s what you’re there for.”

The program’s organizers are continually looking for new material — like Gilpin’s recent experiences — that can illuminate aspects of leadership for the next class. They shadow and study leaders in real-world crises, compile material for new case studies, and develop new ways to think about leadership.

Marcus’ involvement in the Deepwater Horizon response was one such situation. On Neffenger’s invitation, Marcus and NPLI associate director Eric McNulty traveled to the Gulf to observe leaders as they responded. That serendipitously gave Marcus the chance to act as a sounding board when Neffenger needed one.

Another example is an analysis of the Boston Marathon bombing response, published earlier this year in the Journal of Leadership Education. Program organizers analyzed the cooperation among local, state, and federal agencies, which was notably smooth despite the lack of a clear operational commander. The response, they said, was akin to the “swarm intelligence” seen in flocks of birds where complex group behavior occurs despite the absence of a controlling individual.

During the marathon bombing response, agencies coordinated smoothly, followed their training, trusted each other, and pulled toward a single goal: saving lives. As a result, despite more than 250 injuries, including blast amputations suffered on the scene, there were just three deaths. The swarm intelligence that emerged during the response didn’t happen by accident, however. It was the product of trust in the expertise and judgment of others bred during years of drilling for an emergency, the researchers found.

“It goes against a lot of people’s suppositions or intuitions of how things are supposed to work. And we don’t think you get rid of chains of command, because those work really well within agencies,” said McNulty. “But working across organizations, you’ve got to be thinking about order beyond control, because no one person is going to control everything. That message, embodied in the teaching and practices of meta-leadership, is thematic for the NPLI.”