Catching up with the Class of ’48 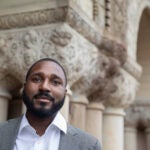 A vigorous vision for life after 90

After the Class of 1948’s 70th reunion in May, the Gazette took a closer look at six of its members and found a group committed to living to the fullest as they age into their 90s.

Take Steven Stadler, who got married last year at age 91 and still travels abroad annually. Or Sayre Phillips Sheldon, who recently celebrated her 92nd birthday in the pool with her aquatics class and is politically active. There’s Henry Lee, who compiled the class’s 70th Anniversary Report, recently marked his 72nd wedding anniversary, and oversees upkeep of the Robert Gould Shaw and the 54th Regiment Memorial in downtown Boston.

Eleanor “Buster” Foley Glimp, widow of former Harvard dean Fred Glimp, paints in two-hour sessions in her kitchen/studio without pausing to sit, and reads the entire Boston Globe and New York Times each morning. Her best friend, Natalie Basso Ryan, regularly walks to the Harvard Art Museums and the Cambridge Library, despite breaking her leg a while back. At 92, Ray Goldberg just published his new book on food globalization, and this month he teaches a seminar at Harvard Kennedy School.