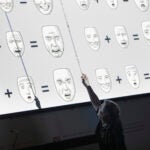 The serious business of comics

Amanda Gorman ’20, the inaugural U.S. youth poet laureate who has written a poem for Harvard President Larry Bacow’s inauguration, wants to change the world with her words, and eventually with her political agenda.

“I am working on hashtags,” said Gorman about the social media strategy for a future presidential run. “Save the 2036 date on your iPhone calendar,” the sociology concentrator tells people without a trace of irony.

Like successful politicians, she has a gift for words, and for seeing challenges as opportunities. An auditory disorder that makes her “hear and process information differently than other people” resulted in a speech impediment she has struggled with since childhood. But the Los Angeles native has refused to let it hold her back.

“I always saw it as a strength because since I was experiencing these obstacles in terms of my auditory and vocal skills, I became really good at reading and writing. I realized that at a young age when I was reciting the Marianne Deborah Williamson quote that ‘Our deepest fear is not that we are inadequate, our deepest fear is that we are powerful beyond measure’ to my mom.”

At age 5, Gorman said she realized “the voice I was reading on the page and writing on the page was the voice I really wanted for myself.” Through the years that voice has grown and garnered attention. She was named the youth poet laureate of Los Angeles in 2014 at age 16 and published her first collection of poetry, “The One for Whom Food Is Not Enough,” the next year. Named the nation’s first youth poet laureate in 2017, she wrote “In This Place: An American Lyric,” a piece informed by poet Claudia Rankine’s “Citizen: American Lyric,” hat has been described by The New Yorker as a “book-length poem about race and imagination.”

“My poem was inspired by this political climate, social, economic, even in terms of the environment,” said Gorman, whose work frequently reflects her commitment to pressing social concerns. Her 2014 poem “Neighborhood Anthem” addresses themes of inequality and injustice. “In the Eye Of,” a poem she wrote for “Weathering Change,” an artistic response to climate change edited by Devin Jacobsen, M.Div. ’18, then a Harvard Divinity School student, and recently released by the Harvard Office for Sustainability, Gorman evokes the havoc wrought by hurricanes.

“It’s not enough for me to write,” said Gorman. “I have to do right as well.”

That activist impulse was key to her college choice. Initially unsure about attending Harvard, a trip to campus helped her see the “University’s commitment to growth and evolution, to social justice and inclusion. That visit made me think, ‘Maybe I can have a role in shaping these types of issues in our country,’ and I realized Harvard was the place to be.”

Gorman’s process for writing commissioned works follows a pattern of intense study and research followed by a period of seclusion, during which she pours the information she has absorbed back onto the page. “Then I begin to shape.”

For today’s commission, “Making Mountains as We Run,” Gorman studied Harvard’s history and Bacow’s life and work. She said her piece was partly inspired by Bacow’s love of running and by his description of his Harvard role “not as a sprint but as a marathon, and thinking in the long term,” said Gorman. “And it’s the hope that we are in essence leaving achievements and mountains for other people to climb as we run forward in our path as a community.”

“It’s not enough for me to write. I have to do right as well.”

Among Gorman’s artistic inspirations are Tracy K. Smith ’94, Pulitzer Prize winner and the 52nd U.S. poet laureate, and author and activist Maya Angelou, whom she calls her “spirit grandmother.” When times get tough, Gorman likes to imagine sitting under a tree with Angelou as she reassures, “Baby, everything is going to be OK.”

Her mother was the first to encourage Gorman’s love of words. A devoted English teacher in the Watts public schools in southern Los Angeles, Gorman’s mother offered “an up-close view of how important literacy is in my city, but also around the country. While my mom is not a poet, she has definitely inspired me in so many ways to pursue my education and take my own writing seriously.”

The summer was a busy time for Gorman, who took part in a reading of letters by the late South African President Nelson Mandela with his granddaughter, spoke at WE Day to thousands, and appeared on television for the BET Black Girls Rock! awards. She read her poem “Earthrise” for Al Gore and “The Playhouse” for Dick Van Dyke and “Hamilton” creator Lin-Manuel Miranda. So how does she think Harvard’s inauguration will compare?

“It’s every poet’s dream to be part of an inauguration because it’s the commencement of something greater than themselves,” said Gorman, adding that the event resonates both personally and nationally.

“Harvard’s not only watching but the world is watching us at this moment, and we have this incredible opportunity, through the vision of President Bacow, to reimagine Harvard’s role in the globe, but also our individual role at Harvard.”

As a poet, Gorman hopes to offer readers and listeners an entry point into an art form often considered “dusty and archaic.” With her work, she hopes to strike a conversational tone, one that “feels very personal, very intimate, but that just coincidentally happens to have these poetic qualities.

“My job is to coax people into my lyricism without them realizing they are listening to a poem. I hope that happens….”