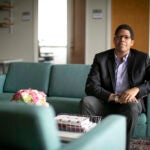 The 6,000 members of the Harvard Asian American Alumni Alliance (H4A) represent different ethnicities, live and work in different areas, and span different Harvard Schools and class years. But, like the members of all of the Harvard Alumni Association’s volunteer-run Shared Interest Groups (SIGs), what brings this diverse cross-section of alumni together is what they have in common — their shared experiences, passions, and bond with Harvard.

H4A members will join hundreds of Asian and Asian American alumni, students, and faculty on campus for the group’s third global summit Friday through Sunday. Held every four years since 2010, the summit gives participants a chance to hear from alumni now working in a range of fields, discuss issues of the day, and connect with the University and one another. Highlights of this year’s event include remarks by Harvard President Larry Bacow and former U.S. Surgeon General Vivek Murthy ’98, a live podcast taping, a storytelling slam, a celebration of H4A’s 10th anniversary, and sessions on topics such as advocacy, technological disruption, and mental wellness.

“This is not just a weekend gathering of alumni and thought leaders. It will be a transformational event that will inspire alumni to change the world and provide them with the energy, creativity, and connectedness to do so,” said Douglas Chin ’88, M.D. ’93, M.M.Sc. ’94, who is co-chairing the summit with Anupam Agarwal, M.P.H. ’05, and Athena Lao ’12.

Chin, Lao, Agarwal, and H4A President Jeannie Park ’83 spoke with the Gazette about the role the SIG and the summit play in Harvard’s Asian American community today.

GAZETTE: H4A held its inaugural summit in 2010, not long after the Shared Interest Groups (SIG) was formed. How did that event come together, and what did it mean to the SIG?

park: There was a concern about our ability to pull something like this off given that the organization was really in its infancy. I literally woke up in a cold sweat every morning for nine months thinking nobody was going to show up, and in the end we had 400 people. It really kick-started the SIG. We realized that we had built this voice and that we could use it to speak out on issues that were important to us at the University. Sometimes you have to raise every voice you have in every corner in order to make sure that your concerns are heard.

GAZETTE: The speakers at this year’s summit represent a broad array of backgrounds, beliefs, and disciplines, which seems to mirror the diversity of your membership. Why is that important to the summit’s success?

lao: When people think of Asian Americans, there’s often this idea that we’re a monolithic group. We’re trying to combat negative stereotypes with positive storytelling by enthusiastically highlighting how much difference there is. I say this as a Filipino American who works in international education and studied classics at Harvard. If we can give people the courage to be their authentic selves, even if that looks very different than traditional models of success, then we can say we’ve done our job.

park: One of the things that’s especially appealing about the SIG, and this summit in particular, is that it does bring together people from so many generations. We have registrants from the Class of 1958 all the way up to current students, and that’s been true of all of our summits. Meeting people across classes and across generations, you get a range of perspectives on being Asian American and on life in general.

GAZETTE:What new topics have arisen as focal points of this year’s summit?

lao: We want to emphasize the need to figure out what it means to have a collective and powerful voice, when that voice has so many diverse parts. A lot of our programming speaks to that. We have people who have worked in advocacy and organizing for important social causes. We have a panel on Asian American studies and how that field has changed. We’re having conversations on business and what it means to be Asian American and trying to break the “bamboo ceiling,” as it were. We’ll also have a series of “lightning talks” that feature six different people who have had unorthodox professional journeys speaking about how they’ve learned from failures to reach success.

agarwal: I organized a session for the summit called “View from the C-Suite,” with four very accomplished panelists. It is well-documented that Asians have very low representation in C-Suites across all industries in the U.S. We will learn about barriers to entry, as well as what are important skills needed to move to the C-Suite. I actually got involved in the summit because I wanted to contribute to the Harvard community, and I thought I could help by connecting with my own professional network and by using my experience as an organizer of more than a dozen “CEO fireside chats” at the Harvard Club of San Francisco.

Chin: Regardless of where one stands on the political spectrum, all would agree that we are in a peculiar moment in American history, and this year the summit draws a multitude of distinguished political leaders. They will address what some of the barriers have been to Asian American participation in government and what special opportunities this moment holds for having our voices heard in unprecedented ways.

park: The admissions lawsuit is another area in which our voice has been important. It’s a very complicated and heated issue that has put more of a spotlight on our community, and our members have looked to us for guidance on how to approach it with a cool head. We’ve been very clear that we’re against discrimination against any racial or ethnic group, but we also believe that holistic, race-conscious admissions are necessary for diversity and opportunity and to reach under-resourced parts of our own community. That was the view we supported by signing the amicus brief with the other alumni and student groups.  A lot of info has emerged that we are still digesting. We’re going to discuss it at the summit, with speakers who have very different and nuanced views. I’m not sure there’s ever going to be complete clarity, but the summit is a chance for us to keep working through it together.

GAZETTE: The theme of the summit is “innovators, instigators, and inspirers.” Why did you pick that theme and how is it carried through the weekend?

lao: We chose those three words deliberately because we wanted to think about what it means to speak out and take action. We want people to innovate, but the word “innovate” on its own could be seen as cliché. We chose “instigate” because to instigate something is to take action in a way that does perhaps raise eyebrows or cause people to pay attention in a way they might not otherwise. And, of course, we chose “inspire” because we want people to be inspired and to aim to inspire after they leave the conference. So when we say “innovators, instigators, and inspirers,” we don’t just mean that the people in our sessions are going to play those roles; we want all of our participants to feel that they can embody those things. We don’t want them to just walk away from this. We want them to want to do something more afterward.

Chin: We envision the summit as something that will inspire innovation and be a starting place for instigating local and global transformation. Each of us is uniquely empowered to make the world a better place in some special way. In my mind, that is what Harvard’s transformational education is all about. And that is what this summit is about.