A professor’s journey to belief 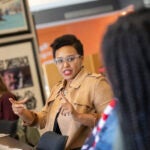 As part of speaker series, Khalil Gibran Muhammad shares a winding past

Harvard Kennedy School Professor Khalil Gibran Muhammad bears a famous name and is the progeny of an equally famous religious leader. He was born into the counterculture of the 1960s, to parents inspired by the mysticism of Lebanese-American poet Khalil Gibran, and spent his early childhood on the South Side of Chicago within the community of the Nation of Islam, the religious and political group led by his great-grandfather, Elijah Muhammad.

On Wednesday night, beneath the bright lights of the main hall of the Smith Campus Center, Professor Muhammad reflected on these, and other, defining forces of his life, in the first installment of a new series of conversations hosted by Muslim Chaplain Khalil Abdur-Rashid. Titled “Life Matters,” the series presents an opportunity for Harvard students to learn from the experiences of esteemed members of the University community, through dialogue addressing the role that religion, spirituality, and ethics have played during their lives.

Throughout the evening, Muhammad shared insights from a life that in many ways he has “grown into,” beginning with his reflections on how it has always been a work in progress to understand the significance of sharing Gibran’s name. In seventh grade, an English teacher gave him a signed copy of the poet’s most renowned work, “The Prophet,” a gift that Muhammad says marked “the first time in my life I realized how important my namesake was, and I began to read and study and I realized that I could make something of this, in terms of his legacy, and my own.”

Bearing the name wasn’t always easy. As a child, he said, he often had to explain it to his public school classmates (the majority of Nation of Islam students attended religious schools, but he did not); his seventh-grade yearbook described him as Kahlua Muhammad. Later in life, he said he was denied financial aid for a Ph.D. program when a member of the search committee admitted concern that he was affiliated with the Nation.

The Nation forged a large part of Muhammad’s cultural identity, but it was not the only influence. His mother, “a product of the ’60s” who never joined the Nation herself, raised him with the humanist values by which she lived her life — concepts that became more prominent in his upbringing when his parents divorced. By the time Muhammad was “7, 8, 9, the world I had known as a small child completely transformed and changed … I was an orphan within a context of a religion that was most prominent in my life.”

For much of the rest of his youth, Muhammad was neither Muslim nor Christian, in any traditional sense, even as he was powerfully influenced by the culture of the Nation. In 1984, when he was 12, he met a lasting mentor, “a Jewish dude from Edison, N.J.,” who hired him to fix computers for University of Chicago professors. He was the first Jewish person Muhammad had known well. Time spent with this mentor, whose own perspective was largely secular, helped expand Muhammad’s worldview beyond the South Side. As he grew, religion provided a rich source of knowledge and understanding, but in general involved more culture than belief.

“My parents never positioned their own faith journey, no matter how active or engaged it was personally, as some litmus test for how to judge the character of other people,” said Muhammad. “It was less about what they said and more about how they treated people.”

“My parents never positioned their own faith journey, no matter how active or engaged it was personally, as some litmus test for how to judge the character of other people. It was less about what they said and more about how they treated people.”
— Khalil Gibran Muhammad, pictured above, left

At age 18, Muhammad became more intimately associated with a specific system of beliefs when he entered his first real relationship, with a woman who was active in the Pentecostal tradition. Since then, Muhammad has identified as a Christian. The beginnings of his journey in this faith were accompanied by his mother’s newfound interest in going to church, and in the proliferation of the megachurches that marked American spiritual life in the early 1990s. His Christianity was solidified when he met and married his wife, Stephanie Lawson, a Southern Baptist who grew up in Florida.

“My Christianity and my experience with religion has always turned on its grounding in a distinct black church tradition,” he said, “and that’s been fortified by the fact that my family — I now have three children — has depended upon religious communities for our cultural nourishment.” This was especially the case when Muhammad taught at Indiana University, in Bloomington, which had a very small black population compared to where he grew up.

There have been significant challenges in Muhammad’s life, and he shared some of those. When he was very young, the death of his father’s younger brother Omar, and the devastating grief of his family, shook Muhammad in a way that made him mortally afraid of the deaths of himself and his parents. News stories during the Cold War would send him into a tailspin; an exhibit at Chicago’s Museum of Science that foretold the death of the solar system when the sun is extinguished — in 7 to 8 billion years — caused him to break down on the spot.

Today Muhammad is a prominent professor of history and a respected author. His book “The Condemnation of Blackness: Race, Crime, and the Making of Modern Urban America” won the 2011 John Hope Franklin Best Book award in American Studies. But early on, it wasn’t evident that he would have a successful career in higher education. In high school and college, he says he regularly slept through class. Later, working as an accountant at a prominent firm, he would frequently hide in the office’s bathroom stalls to take naps. At 22, he was diagnosed with narcolepsy, a condition he has managed without medication for the past two decades. (Asked about his advice for students who may be suffering from a similar condition or disability, he said, “If you are experiencing something that makes you do something that other people don’t do, get help. Don’t wait … It definitely changed my life.”)

As the evening drew to a close, Abdur-Rashid asked Muhammad a final, encapsulating question, “Why does life matter?”

“For me, the older I get, the harder it is to imagine that my life is not fundamentally about the people in it,” he said, “and that the thing that I can control is how I love those people, how I model the values that I have, in particular because I have three children and a partner who has been my best friend for 20-plus years now. For me, life matters because life is a gift, for ourselves and for those people we experience life with. And if we experience those people with greater love and compassion and care and sensitivity, then it all makes sense.”