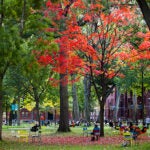 First admissions to Class of ’20

Muhammad currently serves as director of the Schomburg Center for Research in Black Culture of The New York Public Library (NYPL), one of the leading research facilities dedicated to the study of the African diaspora. He is also a visiting professor at the City University of New York. His academic appointments at Harvard begin on July 1.

Muhammad previously served as associate professor of history at Indiana University. His academic work focuses on racial criminalization and the origins of the carceral state. He is the author of “The Condemnation of Blackness: Race, Crime, and the Making of Modern Urban America” (Harvard University Press, 2010), which won the 2011 John Hope Franklin Best Book Award in American Studies. His articles and scholarship have appeared in many publications, including The New York Times, The New Yorker, and The Washington Post.

“Professor Muhammad will amplify the Kennedy School’s capacity to train leaders and solve problems at the intersection of race, ethnicity, and public policy. His historical scholarship on the construction and policing of criminality in the United States is more relevant now than ever,” said HKS Acting Dean Archon Fung. “Professor Muhammad helps us understand our past and apply that to current issues so that we can move powerfully into a positive future.”

As the Suzanne Young Murray Professor at the Radcliffe Institute, Muhammad will spend two of his first five years at Harvard as a Radcliffe Fellow, one of 50 leading scholars, scientists, and artists pursuing innovative work across disciplinary boundaries. The Radcliffe Professorship program brings leading talent to Harvard by offering time and resources to engage in advanced work, within a unique intellectual community that allows new faculty to build connections within and beyond the Harvard campus.

“Radcliffe professors strengthen Harvard because they enhance the excellence and diversity of the faculty,” said Lizabeth Cohen, dean of the Radcliffe Institute. “We are thrilled that the institute helped bring Professor Muhammad — a leading scholar on matters of race, social justice, and opportunity, and a fellow historian — to Cambridge.”

“With their commitment to scholarly excellence and knowledge in the service of the public good, I could not be more pleased to join my new colleagues at the Harvard Kennedy School and the Radcliffe Institute,” Muhammad said. “In my new role, I will build on what I learned leading the Schomburg Center, a world-class research, civic, and cultural institution, which has helped to sustain the black public sphere and expand the meaning and practice of American democracy for the past 90 years. Given the challenges of racial and social injustices sweeping the nation, there is a tremendous need to carry that work forward by deepening the historical context for the many public policies that have brought us to this point.”

Muhammad is a native of the South Side of Chicago. He graduated with a bachelor’s degree in economics from the University of Pennsylvania and received his Ph.D. in American history from Rutgers University, specializing in 20th-century U.S. and African-American history. He also holds honorary doctorates from The New School (2013) and Bloomfield College (2014).