At GSD, a tale of four cities 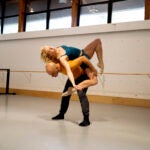 Animated narratives are at the heart of ‘Urban Intermedia’ exhibit

“This is both a homecoming and an opportunity to raise new issues,” said Eve Blau, adjunct professor of the history of urban form at GSD and one of the exhibition’s co-curators. “We see the exhibition as an experiment and the beginning of an ongoing discussion on new kinds of practices around the study of cities that bring together scholarship, design, and media. The open-ended aspect of the project is key to what it is all about.”

The exhibit caps the four-year Harvard Mellon Urban Initiative (HMUI), which Blau co-directed with Julie Buckler, Samuel Hazzard Cross Professor of Slavic Languages and Literatures and of Comparative Literature at the Faculty of Arts and Sciences (FAS); she curated the exhibit itself with the GSD’s Robert Pietrusko, associate professor of landscape architecture. “Urban Intermedia” was designed by Höweler + Yoon Architecture, led by Eric Höweler, associate professor of architecture. It is on view at Druker Design Gallery through Oct. 14.

The exhibition synthesizes four years of scholarship on its subject cities — Berlin, Boston, Istanbul, and Mumbai — via animated digital narratives in a materials-driven installation. Four portals, each dedicated to one of the cities, invite visitors into miniature theaters in which the animated narratives are projected.

To tell the stories, the curators drew from a gamut of fieldwork and archival material, including photography, cartography, architectural drawings, digital data sets, film, and video. Viewers can watch each city unfold over time, but without written or verbal commentary, allowing freedom of interpretation.

During the exhibition’s Sept. 5 opening event, Jeffrey Schnapp, the Carl A. Pescosolido Professor of Romance Languages and Literatures and of Comparative Literature at FAS, compared it to a city stroll: Visitors choose their own paths through the same setting, generating different takeaways from a common landscape.

The curators aimed to illuminate archival material and scholarship with new media, and then apply insights drawn from each city’s history to contemporary issues. Themes include the interactions and tensions between formal urban planning and random human behavior; patterns of migration, mobility, and how claims on space are made by — or denied to — different groups; and how nature interacts with human technologies.

For its curators, “Urban Intermedia” is as much a capstone as it is an experiment, and a gentle guide for future research. A principle behind HMUI, and one that undergirds “Urban Intermedia,” is that no one discipline “owns” a city; rather, urban research should be focused and site-specific while also comparative. Contrasting diverse scholarship can bring into relief so-called “blind spots” outside the scope of one discipline’s reach, and produce more complex and nuanced stories about societies than any single discipline could tell.

“‘Urban Intermedia’s’ methods evolved out of the complexity of the task we had set ourselves: to create a series of multimedia-animated narratives that are composed of the research materials we had gathered and produced in fieldwork and research in the four cities,” Blau said. “We wanted the materials of the research to carry the stories through the spatial and temporal relationships constructed by the intermedia narratives.”

In Berlin’s portal, one video depicts marshy swampland being overtaken by an orderly city plan. Atop this imagery appear drawings of machinery to dredge the swamp and prepare it for city-building. Viewers then see photo and video footage of workers who protested the introduction of this machinery and the resultant loss of jobs.

Configuring a traveling exhibition — especially one that illustrates diverse content not with physical artifacts but with light and sound — presented a design opportunity for Höweler and the team that highlighted the show’s physical armature.

“The idea of an exhibition that was global in its scope and global in its materiality was part of its conception,” Höweler says. “The idea to present the content in a way that allowed it to be present in each different context was to create the display system with a real material presence.”

Accordingly, he and his team emphasized how the nature of each material would strike viewers and support the show, conceptually and literally. They chose stainless steel rods produced by Tripyramid, which makes hardware for sailboats, to support the exhibition’s video projectors. A two-ton, 33-foot-long, 6-inch-thick table for map displays was carved from a single block of glued-laminated lumber, or glu-lam, an engineered wood of growing interest as a construction material in lieu of steel or concrete.

The exhibition’s design also prioritized deceleration, lingering, and audience interaction with content and with one another. The team conceived the city portals as a daisy-chain system, with the structure of one doubling as seating for its neighbor. The glu-lam table serves as a display for maps but also a space for convening informal discussions. The exhibition’s terminus features three seating nooks integrated into a thickened, wooden wall, which students and faculty have activated as a study and discussion space.

Over its travels, “Urban Intermedia” has also introduced site-specific themes. In Berlin, it focused on the city as a testing ground for new ideas; in Mumbai, it highlighted the idea of a city as an elastic, constantly adjusting environment; and the Istanbul installation emphasized the flux and the phenomenal growth of that city, especially the collision of formal plans and unplanned behaviors.

For its Boston-themed installation, “Urban Intermedia” adds a section on race, space, and power in urban development, curated by Assistant Professor of Urban Design Stephen Gray. Gray invited contributors to interpret “race and space” freely, using materials from their collections that addressed the theme historically and spatially.

The result spans three eras of city-making, with a focus on the physical infrastructures that define the spatial and political dimensions of segregated inner-city neighborhoods where many African-Americans and immigrants live. Gray and his collaborators sourced archival materials from Boston-based collections, including Northeastern University Library Archives and Special Collections, the Norman B. Leventhal Map and Education Center and Boston Public Library Archives, and The Boston Globe.

As in its other host cities, “Urban Intermedia” aims to inform viewers of particularities of Boston’s urban development, with nods to themes rendered via the other cities at hand. The viewer is left to mull over these tales of city- and culture-building.