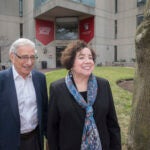 A boost for school principals

Chair Gordon-Reed talks about the work done so far, and what’s to come

On April 13, the Cambridge Police Department arrested a Harvard College student, a development that sparked concerns on campus and in the larger community. In the days that followed, then-President Drew Faust sent a message to the community expressing her concern, noting that the student was in obvious distress. She called for a better understanding of how that had happened and whether authorities could have interceded earlier and more effectively.

To help ensure that the facts surrounding the arrest are clear and that recommendations are made for the future, a review committee was established, chaired by Annette Gordon-Reed, Charles Warren Professor of American Legal History at Harvard Law School and professor of history in the Faculty of Arts and Sciences. The committee worked through the summer and plans to issue a final report and recommendations this fall. The Gazette spoke with Gordon-Reed about the committee’s activities so far, and its next steps.

GAZETTE: What was your reaction when you heard the news and saw the footage of the student arrest back in April?

GORDON-REED: It was shocking. I know that area well from being a student, and as a professor at the Law School. With the advent of cellphone cameras, videos of police/citizen interactions have become all too familiar. I’ve seen so many videos of that nature, but this was happening in a place I know well. I was in California at the time, and one of my students at the Law School emailed me about what happened pretty soon afterward. I think President Faust was speaking for so many of us when she called the event “profoundly disturbing.”

GAZETTE: Shortly after the arrest, a review committee was put together with you as chair. What can you tell us about the work the committee has been doing?

GORDON-REED: It has been a really busy summer for us. We’ve had about seven meetings with the whole committee together, as well as additional subcommittee-type meetings to discuss specific issues. When the formation of the review committee was announced, we created an email address to get community input. Our first order of business was to read through the dozens of messages that came in. Then we gathered a lot of survey data and reports on topics that came up in the messages and in conversations in the immediate aftermath of the event. We got copies of the protocols that Harvard College, the Harvard University Police Department (HUPD), and Harvard University Health Services (HUHS) follow in emergency situations, and of documentation of what happened on the night of the incident. The Committee met with representatives from the College, HUHS, and HUPD, and spoke with students, including representatives of Black Students Organizing for Change. We also met with John Wilson, who is advising President Larry Bacow on, among other things, the implementation of the recommendations of the Task Force on Inclusion and Belonging. Unfortunately, given that they are currently undergoing an independent review of this incident, the Cambridge Police Department (CPD) was unable to meet with us.

So overall it was a lot of information to take in, but necessary to what we are trying to accomplish. We see the scope of our review as looking at three distinct phases of activity: 1) the events leading up to the incident; 2) the circumstances of the incident itself; and 3) the community reaction to it. From all our discussions, one thing is clear: Everyone shares the goal of making sure our students are safe and have resources available to them when they need them.

GAZETTE: Although you did not meet with them, are you also reviewing the actions of the CPD?

GORDON-REED: At the end of the day, the protocols and practices of CPD are beyond the scope of our charge, and beyond the scope of our authority, actually. The review committee was asked to “identify opportunities for improvement across a range of institutional activities” at Harvard. Our overriding goal is to determine what actions we can take here at Harvard to address the concerns this incident has raised for our community.

GAZETTE: What kind of concerns have you been hearing?

GORDON-REED: Well, there have been some consistent themes in what people have been reporting to us. First, we heard many different understandings of what to expect from an emergency response. There was confusion on the part of some about why a call to HUHS would result in police coming to the scene, while others always assume the police will be involved as first responders to medical emergencies. And a lot of people talked about the three phone numbers on the back of the Harvard ID. It’s important for us all to understand how members of the community are choosing which number to call, and what assumptions are driving those choices.

We’ve also heard that many would have liked HUPD to have been on the scene that night, even though the incident occurred off campus. What can we expect from HUPD in incidents that occur off campus? So it’s a combination of evaluating our current practices while at the same time trying to understand what the community’s expectations are. This is a challenge that takes on particular urgency as we expand our campus and think about students passing through multiple jurisdictions as they move from the Yard to new facilities in Allston.

And finally, there were real concerns expressed about the levels of dangerous drinking that occurred at the College’s Yardfest event. This year there were 18 medical transports, which is an eye-popping increase compared with past years. That clearly was a strain on first-responder resources.

GAZETTE: What has surprised you most about this process so far?

GORDON-REED: How many moving parts there are. So many different entities touch the lives of our students on a daily basis. I knew this, of course. But when something like this incident happens, something so out of the ordinary, you have to pause and go over every single relevant part of the system to see what worked and what could have worked better. It really hits you what a complicated mechanism this is. But we can’t let complexity keep us from progress. The most important thing is that we all learn from this event, and do everything we can to improve our collective practices, and hopefully our report will help us reach that goal.

GAZETTE: So what’s next for the committee?

GORDON-REED: Well, an important part of our charge was to carry out “broad levels of student engagement.” We see this as essential to our ability to get this right and make useful recommendations. Our targeted outreach over the summer was informative, but we need much more input than we could get when students were away from campus. So, we’re running focus groups at the start of the semester to get the input we need. The groups will largely consist of students, but we will also have a focus group for tutors and proctors, who live in the Houses and Yard dorms and have an important perspective on the undergraduate experience. Invitations to students to participate will be circulated by the deans of students at the Schools in the next few days.

We also encourage people to write to us at reviewcommittee@harvard.edu. Once all this information has been collected, and we’ve been able to digest it, we’ll make recommendations to President Bacow. We had hoped to deliver recommendations before the start of the semester, but as we began to unpack all the questions inherent in this situation, it became very clear that more time was needed. It is more important to us that our recommendations reflect the insights of students and other members of the community. We look forward to learning from the focus-group conversations this fall.