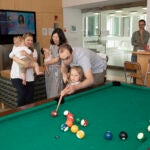 At Harvard, the same could perhaps be said of the Nobel Prize. A single floor in a single building housed the research laboratories of three Nobel laureates. Six more were trained there, going on to receive the coveted honor after leaving Harvard. A 10th researcher followed the same path, although he was on the floor above.

The place? The third floor of the Bio Labs on Divinity Avenue.

Walter Gilbert, who won the 1980 Nobel Prize in chemistry, worked on the third floor as he developed ways to work out the sequence of genetic building blocks in DNA. Thirteen years earlier, in 1967, George Wald won the Nobel in medicine or physiology for his research into the biochemistry of vision; and in 1962, James D. Watson, one of the co-discoverers of the structure of DNA, was awarded the prize in medicine or physiology.

Mario Capecchi, a co-winner of the Nobel in physiology or medicine in 2007 for discovering a method to create mice in which a specific gene is turned off, studied for his Ph.D. with Watson. Robert Horvitz, who studied with Watson and Gilbert, won the same category in 2002 for his research on the nematode worm Caenorhabditis elegans. Jack Strominger’s laboratory produced Richard Roberts, who won the physiology or medicine prize in 1993 for co-discovering introns in eukaryotic DNA and the mechanism of gene-splicing. The Strominger lab also hosted Roger Kornberg while he was a Harvard Junior Fellow; Kornberg became the 2006 winner in chemistry for his studies of the molecular basis of eukaryotic transcription. Martin “Marty” Chalfie, the 2008 winner in chemistry for the discovery and development of green fluorescent protein, did research on the third floor while he was an undergraduate, and Craig Mello, the 2006 co-winner in physiology or medicine for the discovery of RNA interference, did his Ph.D there. The fourth floor produced Sidney Altman, a postdoctoral researcher in the laboratory of Matthew Meselson. Altman shared the 1989 Nobel in chemistry for his work on the catalytic properties of RNA.

Today, Richard Losick, Maria Moors Cabot Professor and of Biology and Howard Hughes Medical Institute Professor, has his office in Room 3032. In breaks from his studies on the development of the spore-forming Bacillus subtilis, he’s researched the third-floor phenomenon.

Losick remembers his neighbor Wald saying of the female praying mantis, a cannibalistic lover who eats her partner after mating, “He who loves and runs away lives to love another day,” and recounts Watson’s blunt assessment of his most famous colleague: “I have never seen Francis Crick in a modest mood.” He writes about Capecchi’s childhood starving on the streets of northern Italy while his mother sat in a Nazi jail; Horvitz’s realization that, “If you could survive a Harvard group meeting, you could survive anywhere”; and Mello’s competitive drive that led him to front a lab team in the Rhinos Club volleyball competition.