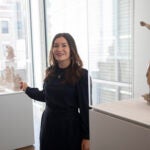 Noted for contributions to African and African-American history and culture

Athlete and activist Colin Kaepernick and activist and comedian Dave Chappelle are among the eight distinguished people who will receive the W.E.B. Du Bois Medal at the sixth annual Hutchins Center Honors presented by the Hutchins Center for African & African American Research at Harvard University.

All of the Du Bois medalists have made significant contributions to African and African-American history and culture, and more broadly, are individuals who advocate for intercultural understanding and human rights in an increasingly global and interconnected world.

The ceremony will be held Oct. 11 at 4 p.m. in Sanders Theatre, Memorial Hall, 45 Quincy St., Cambridge.

“In the year of the 150th anniversary of his birth, W.E.B. Du Bois would be proud of the eight individuals being recognized at this year’s Hutchins Center Honors,” said Henry Louis Gates Jr., Alphonse Fletcher University Professor and director of the Hutchins Center. “Emerging from a variety of backgrounds and professions, each represents the quest for knowledge, freedom of expression, and pursuit of truth that are foundational to black history and culture, and that were foundational to Du Bois as a thinker and activist.”

Glenn H. Hutchins, co-founder of North Island and chairman of the National Advisory Board of the Hutchins Center, said, “The Hutchins Center Honors celebrates the innovators and trailblazers who seek, each in their own way, to nudge the arc of history toward justice. The W.E.B. Du Bois medalists who will be on this year’s stage at Sanders Theatre have all had an outsized impact for the better on our society, our nation, and even our world. It will be a privilege to be among them.”

Colin Kaepernick, an athlete and activist, is perhaps best known for protesting against racial injustice by taking a knee rather than standing during the playing of the national anthem when he was a quarterback with the San Francisco 49ers. Kaepernick has pledged to donate $1 million to “organizations working in oppressed communities.” And, in a recent highly publicized endorsement deal with Nike — Believe in Something. Even if it Means Sacrificing Everything — the company has agreed to donate to Kaepernick’s “Know Your Rights” nonprofit organization.

In 2017, GQ magazine named Kaepernick its “Citizen of the Year.” “Colin Kaepernick’s determined stand puts him in rare company in sports history: Muhammad Ali, Jackie Robinson — athletes who risked everything to make a difference,” the magazine stated.

Comedian, actor, and producer David Chappelle may be best known for “Chappelle’s Show” on Comedy Central and, more recently, for his comedy specials on Netflix, but he has also had a career in acting and producing. He has appeared in several movies, including “Robin Hood: Men in Tights,” “The Nutty Professor,” “Con Air,” and “Undercover Brother.” His first lead role was in “Half Baked,” which he co-wrote. He also starred in “Buddies,” an ABC-TV series. He can be seen now in the 2018 film “A Star Is Born,” with Bradley Cooper and Lady Gaga.

Chappelle has received numerous accolades and awards, including several NAACP Image Awards, a BET Comedy Award (“Chappelle’s Show”), a 2018 Grammy Award for best comedy album, and two Prime Time Emmy Awards: outstanding guest actor in a comedy series (“Saturday Night Live”), and outstanding variety special (pre-recorded) for “Dave Chappelle: Equanimity.” Rolling Stone ranked him No. 9 in its list of 50 Best Stand-Up Comics of All Time, and he was called a “comic genius” by Esquire magazine.

Kenneth I. Chenault is chairman and a managing director of the venture capital firm General Catalyst. Prior to that, he was chairman and chief executive officer of American Express Co., a position he held from 2001 to 2018. He joined American Express in 1981 as director of strategic planning and served subsequently in a number of increasingly senior positions, including vice chairman and president and chief operating officer, until his appointment as CEO. Under his leadership, American Express built one of the world’s largest customer loyalty programs — Membership Rewards — and earned global recognition as a leader in customer service.

Chenault is recognized as an expert on brands and brand management and has been honored by multiple publications, including Fortune magazine, which named him one of the world’s 50 Greatest Leaders in its inaugural list in 2014. He serves on the boards of Airbnb, Facebook, IBM, The Procter & Gamble Co., the Harvard Corporation, and numerous nonprofit organizations, including the Smithsonian Institution’s Advisory Council for the National Museum of African American History and Culture, the National September 11 Memorial & Museum, and Bloomberg Philanthropies. He also serves on the board of trustees for New York University Langone Health.

Shirley Ann Jackson is president of Rensselaer Polytechnic Institute, the oldest technological research university in the U.S. Described by Time magazine as “perhaps the ultimate role model for women in science,” Jackson has held senior leadership positions in academia, government, industry, and research. A theoretical physicist, she holds an S.B. in physics and a Ph.D. in theoretical elementary particle physics, both from Massachusetts Institute Technology. She also holds 53 honorary degrees.

Pamela J. Joyner has nearly 30 years of experience in the investment industry. She is the founder of Avid Partners, LLC, where her expertise has been in the alternative investment arena. Currently, Joyner is focused on her philanthropic interests in the arts and education.

Florence C. Ladd, author, social critic, and psychologist, is a fiction writer. Her novel “Sarah’s Psalm” (Scribner, 1996) received the 1997 Literary Award for Fiction from the American Library Association’s Black Caucus. Ladd’s short stories have appeared in The Golden Horn and Ragtime. She also has written several nonfiction and research works. She co-authored the book “Different Strokes” (Westview Press, 1979). Her recent nonfiction works are included in “A Stranger in the Village” (Griffin and Fish, eds.), “Grandmothers: Granddaughters Remember” (Marguerite Bouvard, ed.), and “Dutiful Daughters” (Jean Gould, ed.). Her essay “On Being Daddy’s Son and Daughter” was published in “Father” (Claudia O’Keefe, ed.). She also contributed to “At Grandmother’s Table” (Ellen Perry Berkeley, ed.).

Bryan Stevenson is the founder and executive director of the Equal Justice Initiative (EJI) in Montgomery, Ala. Under his leadership, EJI has won major legal challenges eliminating excessive and unfair sentencing, exonerating innocent death-row prisoners, confronting abuse of the incarcerated and the mentally ill, and aiding children prosecuted as adults. Stevenson recently won a historic ruling in the U.S. Supreme Court banning mandatory life-without-parole sentences for all children 17 or younger. He is a graduate of Harvard Law School and has been awarded 34 honorary doctorate degrees. He is the author of the award-winning New York Times best-seller “Just Mercy.”

In April 2018, EJI opened The Legacy Museum: From Enslavement to Mass Incarceration, built on the site of a former slave warehouse in downtown Montgomery. This is a companion to a memorial to victims of lynching, The National Memorial for Peace and Justice, which opened at the same time.

Kehinde Wiley has firmly situated himself within art history’s portrait-painting tradition. He engages the signs and visual rhetoric of the heroic, powerful, majestic, and the sublime in his representations of urban black and brown men and women found throughout the world. By applying the visual vocabulary and conventions of glorification, history, wealth, and prestige to subject matter drawn from the urban fabric, the subjects and stylistic references for his paintings are juxtaposed inversions of each other, forcing ambiguity and provocative perplexity to pervade his imagery.

Wiley holds a B.F.A. from San Francisco Art Institute, an M.F.A. from Yale University, and an honorary doctorate from Rhode Island School of Design. His paintings are in the collections of more than 40 museums, including the National Portrait Gallery, Washington, D.C.; the Los Angeles County Museum of Art; the Hammer Museum, Los Angeles; the Museum of Contemporary Art, Los Angeles; the Metropolitan Museum of Art, New York; and the Brooklyn Museum. Wiley was recently the subject of the documentary “An Economy of Grace” (2014, Show of Force). The U.S. Department of State honored him in 2015 with the Medal of Arts, celebrating his commitment to cultural diplomacy through the visual arts. In February 2018, his portrait of Barack Obama was added to the permanent installation of presidential portraits in the Smithsonian’s National Portrait Gallery.