A celebration of diversity 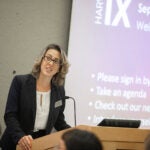 With music, dance and spoken word, a small group of Harvard students animated an educational display on diversity last Friday, opening up the conversation and bringing new life into one of the more intimate public spaces in Harvard Yard’s Tercentenary Theatre.

Billed as “Defending Diversity: A Timeline of Affirmative Action and Race-Conscious Admissions,” the afternoon event drew students and passing tourists into “Autumn (Nothing Personal),” Teresita Fernández’s colorful outdoor installation. In the center of the piece’s concentric circles, the hosting organizations — the Task Force on Asian and Pacific American Studies (TAPAS) and the Committee on Ethnicity, Migration, and Rights (EMR) — had posted a series of placards noting court cases and the ensuing laws that have defined race-related decisions in U.S. education history. These, as well as the sunny orange-yellow artwork, limned a space that was both intimate and open, perfect for small-scale performances within the wider scope of Harvard Yard.

Poet Sarah “Changy” Chang, a College junior, started the festivities with a piece addressing Asian tourists in the Yard. Asking a hypothetical tour group whether their flights were a “lucky 12 hours” or longer and offering to help them find their way around, she posited an inviting face, in opposition to the dismissal or disregard some Cantabrigians might give such a group.

“Most of my poems deal with racial justice and inequity,” said Chang, who is concentrating in ethnic studies. “I’m a firm believer in affirmative action.”

The Harvard Breakers were up next, performing gymnastic moves on a temporary dance floor, before a duo operformed “Arirang,” an arrangement of the Korean folk song.

Visitors milled around, many adding their thoughts to a sheet that prompted “I want a diverse campus because …” or donning stickers that supported diversity, while perusing the timeline at the center of the event. The timeline played out on 11 placards and spanned this country’s earliest days up through the pending diversity lawsuit against Harvard.

Beginning with a 1790s naturalization act that decreed only “free white persons … of good moral character” were eligible to become naturalized citizens, it moved on to note that the Civil Rights Act of 1866 allowed any person born in the U.S. to be considered a citizen — with the exception of Asians, who were still barred from full citizenship by such statutes as the Alien Land Law. The cases that ringed the installation’s central concentric circle ranged from the better known, such as Plessy v. Ferguson (which upheld “separate but equal”) to Ozawa v. U.S., a 1922 case that affirmed the earlier ruling that “Asiatics” were not eligible for naturalized citizenship.

That much of this history may have been new to attendees was, said organizers, part of the point. “A big part of this event is just to raise awareness and give some history about what has led to this lawsuit and about race-conscious admission,” said Daniel Lu, a junior, and one of the organizers of the event. “TAPAS and the EMR are both very supportive of diversity and race-conscious admissions, but we recognize that this lawsuit is particularly complicated,” he said.

“We’ve had panels,” added Emily Zhu, a junior and a TAPAS member. “But we wanted something interactive so students and visitors to Harvard can really process what this lawsuit means in the context of history and the context of what’s happening today around race.”

Among attendees, the event won high marks. “I’m so thrilled to have this here,” said Amanda Figueroa, a Ph.D. candidate in American studies at the Graduate School of Arts and Sciences. Queried about the event, Figueroa turned the question back on interviewer. “Obviously it so timely in terms of current issues and current events,” she said. “But the question of ‘why’ is not something we ask for other events.

“Because,” she concluded. “End of sentence.”