Behind an eerie sound, science, espionage, and dashed dreams 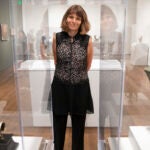 If it’s not calibrated just right, “it can sound so easily horrible,” said Dorit Chrysler while sound-checking the instrument she has played for more than 20 years and never once touched during a performance. Not long after adjusting its levels, she made her theremin sing.

The Austrian-born Chrysler, a musicologist, composer, and leading thereminist, sat down with Harvard physicist John Huth at the Radcliffe Institute on Monday for a conversation set to music, “Science Sounds Strange: Ether Waves, Espionage, and the Theremin’s Odyssey.” The event was first in the Radcliffe lecture series Undiscovered Science.

A staple of spooky movie soundtracks — recall the sci-fi cult classic “The Day the Earth Stood Still” or Alfred Hitchcock’s “Spellbound” — the theremin, one of the first electronic instruments, was created by Russian physicist Léon Theremin in 1919. The device consists of a small, narrow box of wood or metal containing a tone-producing oscillator attached to two antennas, one that controls pitch, the other volume. The player generates sound by moving his or her hands past the antennas — in essence controlling the surrounding electromagnetic fields with gestures.

To the uninitiated, mastering the theremin may appear to require a simple wave of the hand. The experts know better.

“It’s extremely hard to play because it responds to the slightest motion of the body. Even though you think you are not moving, you still are constantly in motion and it changes the pitch,” said Chrysler, who played a stirring rendition of French composer Camille Saint-Saëns’ “The Swan.”

That sensitivity to movement means thereminists are in perpetual search of pitch, or “constant intonation,” added Chrysler. “It’s kind of like the bumblebee buzzing around the flower, which is the pitch, and you are trying to land on it.”

Unsurprisingly, the quirky instrument was the offshoot of a science experiment. Theremin, who was also a trained cellist, was tinkering with early forms of motion detectors in Russia when he realized he could generate sound, and ultimately music, with his invention. A tour of European concert halls and a move to the U.S., where he performed and patented the instrument, followed. After a well-received New York recital in 1927, the inventor told The New York Times that his creation would “liberate the composer from the despotism of the 12-tone piano scale,” and transform the musical landscape.

Well, not exactly. It made an initial splash in the U.S. thanks in part to the virtuoso violinist-turned-thereminist Clara Rockmore, who toured the country with the bass baritone Paul Robeson. And the inventor sold the rights to RCA, making the theremin “the very first electric instrument to be mass-manufactured,” said Chrysler. But its high price tag and steep learning curve, not to mention the Depression, were a recipe for passing novelty rather than worldwide sensation.

Then, in 1938, Theremin vanished from the U.S. Some said he fled to Russia to escape mounting debts; others claimed he was a spy who had been called home; some suspected he had been kidnapped by the KGB. He would resurface in Siberia before moving to a Russian science camp, where “he applied the principle of his instrument to another meaningful electronic device,” said Chrysler. “Namely, the bug.”

“[Theremin] applied the principle of his instrument to another meaningful electronic device. Namely, the bug.”
— Dorit Chrysler

Russia spied on the U.S. for years with the help of Theremin’s covert listening tool, affixed to a seal that hung in the American ambassador’s office in Moscow. The bug worked by converting the human voice into a radio frequency signal, said Huth, Donner Professor of Science.

The Russian’s other invention has so far played a smaller role in history, despite star turns in songs by the Beach Boys, the Rolling Stones, and others. Why bother with a theremin when synthesizers and sophisticated software can generate a seemingly infinite range of similar sounds? Because its tone and physicality remain unmatched, says Chrysler, who co-founded the New York Theremin Society, established the first U.S. theremin school for kids, and regularly performs with orchestras and ensembles around the world.

“I don’t think any other electronic instrument has that detailed dynamic range and capacity that the theremin can offer because it responds to the slightest movement of the body,” she said. “And it’s also a very physically active instrument. You don’t touch anything, but it’s really like your body is making the music, and that’s a very intriguing, unusual way of producing sound.”

The next talk in Radcliffe’s Undiscovered Science Lecture Series, “Tara Oceans: Cells, Embryos, and the Origins of Complexity in Life,” will take place on Oct. 2 at 5 p.m.